If you caught this post, you know I've been feeling overwhelmed at work and also a bit burned out on running and especially hard training lately, so I've been giving myself a little break from the pressure of sticking to a training plan. I decided not to run Stowe Lake since I am now in terrible (or at least far from great) shape and had not actually registered for it yet. However, since I'd paid for this race and it was just a low-key community 5K, I decided to go ahead and do it.

Originally this was supposed to be an all-out race pace effort, sort of a dress rehearsal for Stowe Lake in two weeks. But given the burnout situation I told myself that the point was now just to have fun and enjoy running (remember how you LIKE running and it's actually FUN when you don't put tons of pressure on yourself???). All I had to do was show up, run whatever pace felt good, and if it was slow and bad, oh well, at least I got out of the house & got a workout in and an Alice in Wonderland medal & had fun.

(Now, here is some honest talk that I don't know how I feel about. I think I've always placed in my age group at Brazen 10Ks and sometimes been top three overall, but I took a peek at last year's Hellyer 5K results and, based on the times, saw that if I ran it with any amount of speed, even way off my recent 5K times, I actually had a shot at winning overall. And I would be lying a little bit if I didn't think to myself, "You know, San Jose is a long way to go for a 5K, but if you have a chance at actually winning..."

Now, do I *really* care that much about winning a small local 5K with a slow time? Not really. After all, places are much more about who else shows up or doesn't than they are about how fast any one particular person is. But, I will totally admit that it was a little bit of an extra carrot out there to incentivize me to actually get up and drive an hour and run some semblance of hard-ish. Yes, you might be able to win even with a slow time, but you still have to actually *show up* and, like, *try*.)

The 5K was a 9:15 start so it was nice that, even with an hour drive, I didn't have to get up any earlier than on a normal weekday. I slept terribly but actually woke up feeling okay and arrived at Embedded way a little over an hour before the start, which gave me plenty of time to get my bib and warm up (or, it would have, except that a) the parking was a good hike up a hill from the staging area, and b) there seemed to be a lot fewer porta potties than usual, so I spent a lot of time I'd planned to be jogging standing in the line). In the end I had time to get out on the course for a 1.85 mile warm up, which got me back to the start just in time to hear the four-minute warning for the 5K.

I didn't really have a race plan except to run hard enough to have fun. I thought I'd see if I could run somewhere around 7-7:10ish, but if it didn't feel good, I wasn't going to kill myself trying to keep it up, though, in the end, I basically ignored my watch altogether and just ran at a pace that felt like work but not death. I'd started almost at the front of the starting line with only a few women ahead of me, but I think I'd passed them all before the first mile marker.

My first mile ticked off 7:00, which surprised me a little but felt good. It was warm in spite of the shade and I started slowing down a good bit in mile 2, but given how quickly I had passed all the other women and none of them had ever come back, I felt pretty confident that even at closer to 10K pace, I probably wouldn't get passed back any time soon. (Though, mile 2 was 7:22, weirdly slow, but I couldn't bring myself to care that much.)

I've noticed in race pictures lately that my feet have sometimes started doing this weird
turnout thing....not sure what's up with that but it looks terrible. :O

On the way back it was me and a few men, and I found it pretty gratifying to easily pass a few of them in miles 2 & 3. I think I probably could have run faster but mentally just didn't really want to. I hit mile 3 in 7:22 again, which was still a good bit slower than I would have thought I was running, but again, whatever.

As I came off the trail and back onto Embedded way in the last .1 I tried to sprint a little, & it wasn't until I was literally steps from the finish line that I heard someone at the finish going, "Whoah, it's a race for first, photo finish!" and that was the first moment at which I realized one of the women I'd passed early was *literally* right on my heels.

I HAD NO IDEA! I WOULD HAVE RUN FASTER! (And then a part of me says, "Lol well if you cared so much then maybe you should have, idiot." Fair.) But I held on & crossed the line *just* in front of her. 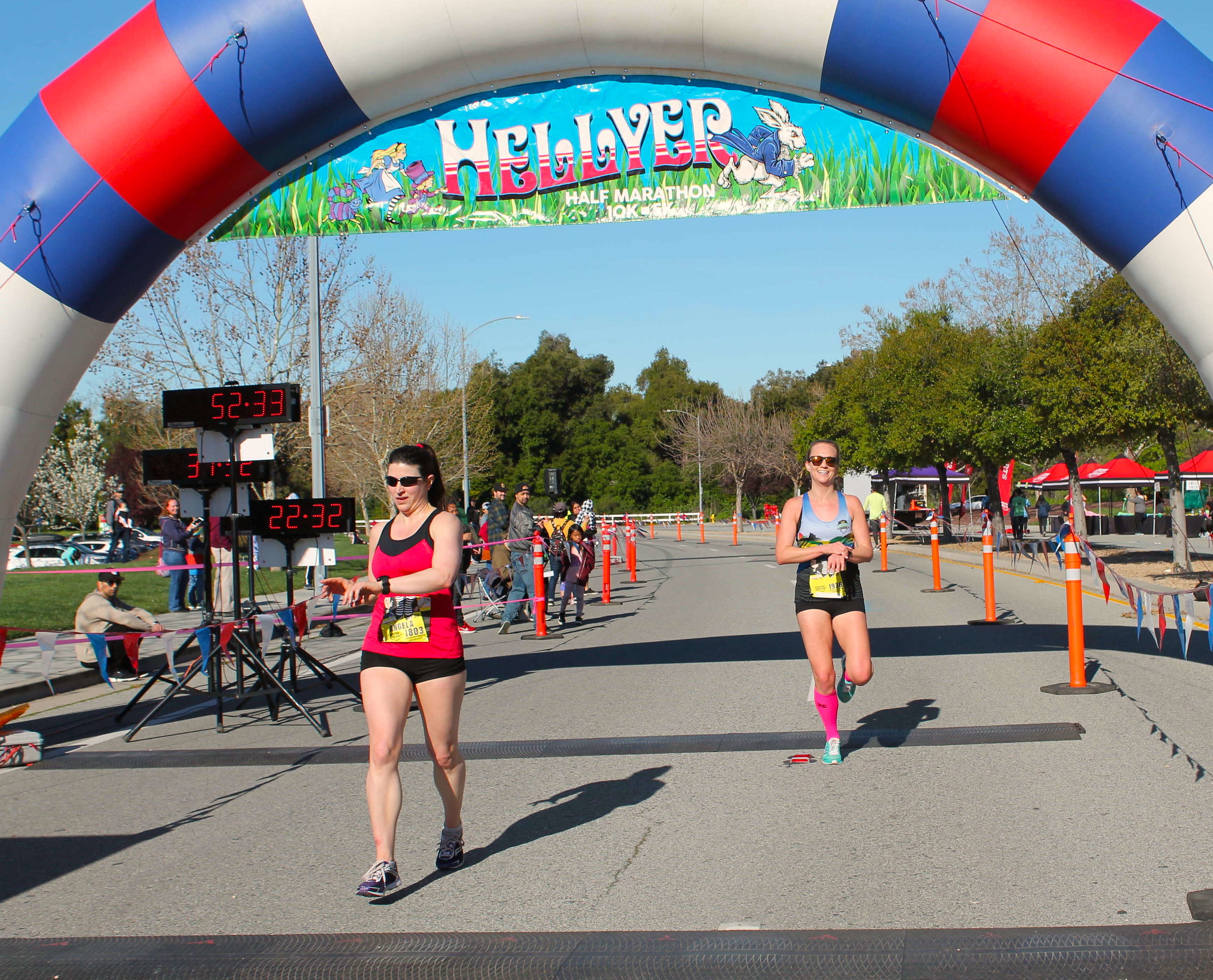 So, yeah. Honestly it really just felt good to go out and run a bit hard and have fun, even knowing that I'm not in great shape, without the pressure of all-out racing or worrying about the result. I walked away with a cool rabbit medal and a free entry to a future Brazen race which is pretty sweet.

I also got to remember that, "Oh, hey, you actually really DO enjoy racing, and you don't even have to be in good shape to have fun!" Which, given all my running-related angst as of late, was a really nice reminder.

The Deal: If you've done any kind of trail racing in the Bay Area, you've heard of Brazen. Their events are small, well-organized, really fun, & have the best post-race spread of any local race you've ever been to.

Price: The info isn't up anymore but I signed up for the 5K late & paid $56.69 including internet processing fees. I don't remember what the price is if you sign up early.

Deadlines/sellout factor: I'm not sure whether any of these distances sold out or not. Some distances at popular Brazen events definitely do, though.

Field Size: Compared to when I ran the 10K in 2013, numbers have gone down a bit in all three distances.

The last time I ran this race it was staged at Hellyer County Park, but this year it was staged at 800 Embedded Way by the Silver Creek Sports Complex (the same place that Race to the End of Summer was staged in 2016 and 2017).

There were some REALLY long porta potty lines this time; not sure if that's more an issue of too few, or if my timing in getting in the line (right after the half marathon start, ~15 minutes before the 10K & 30 minutes before the 5K) was just bad.

I will say that at Embedded Way, most of the closest parking is up a VERY steep hill from the staging area, so just be prepared to either take the longer, gentler road down, or scramble up and down the super-steep brush. Your choice. (They had a bag check even though the parking was so close, which I appreciated because that hill sucks.)

This year the 5K & 10K were out & back along the Coyote Creek Trail; I think the Half Marathon went out in the opposite direction, then back, then out & back the other way. This is a pretty nice trail to run on, plenty wide enough for a race this size, with lots of tree shade. It's a bit windy in places & there are a few noticeable (but very short) hills/dips, but nothing crazy. Plenty of aid stations & mile markers that seemed pretty accurate.

As with Shamrock Run a couple of weeks back, I think they had to reroute at least part of either the 10K and/or the Half due to issues with flooding on the trail, but it didn't effect the 5K

Brazen's legendary artistic finisher medals, logo tech or cotton T (you can take $5 off your registration fee if you go shirtless, THANK YOU), free photos, & awesome post-race spread for all runners; Brazen also does age group winner medals three deep in five-year increments, and at this race it seems like the top three men & women overall in each distance got something extra (I got a free entry to a future Brazen race which personally I think is an AWESOME award & something I will definitely remember & be excited to use).

Though it's been over two years, over the course of my Bay Area road racing career, I've run a ton of Brazen races and they are always fabulous. They are also small and fairly non-competitive (though occasionally some fast people show up), so they're a great low-pressure, just-run-and-have-fun option. Yes most of their races are trails, but they do host several like this one that are on flatter, paved or mostly paved terrain suitable for confirmed roadies like moi.

Posted by Angela Knotts at 9:22 AM