I'm dealing with some drama right now & don't really feel up to writing a week(s)-in-review or peppy goal race lead-up post, so instead you get the perennial Kinvara x vs Kinvara (x+1) review.

I'd forgotten about it for a while, until halfway through my 22 mile long run I started to kind of feel like maybe my current pair of Kinvara 5s, the ones specially reserved for long runs, were finally shot. 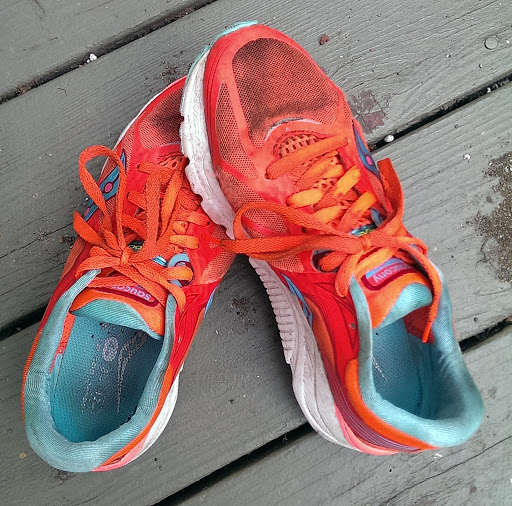 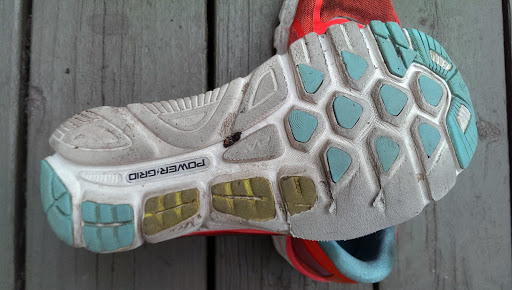 Sure enough, after entering that day's mileage into the spreadsheet on which I track these things, I saw that that particular pair had indeed broken 200 miles, and over the years I've learned that once a pair of Kinvaras reach that point I do not want to run in them for more than maybe 90 minutes because the cushioning just doesn't hold up. (The K5s seem to go maybe ~200 more miles in the 60-90 minute range & after that maybe ~100 or so for short, easy runs & then they're done. FWIW, I got more mileage out of older versions, but they never quite felt as good for runs over say ~2 hours.) 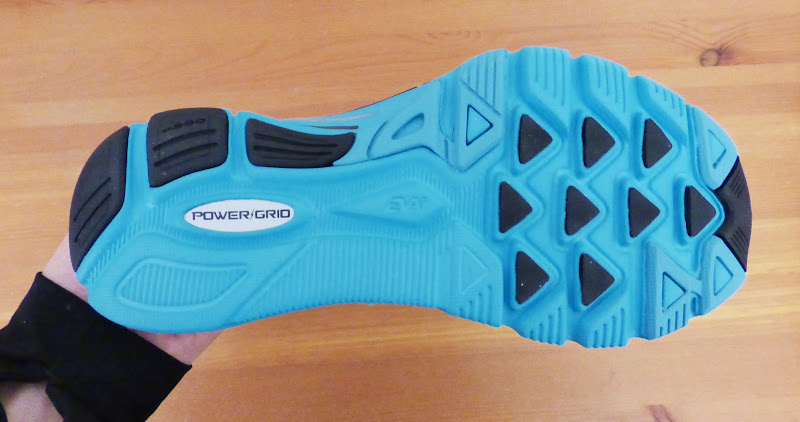 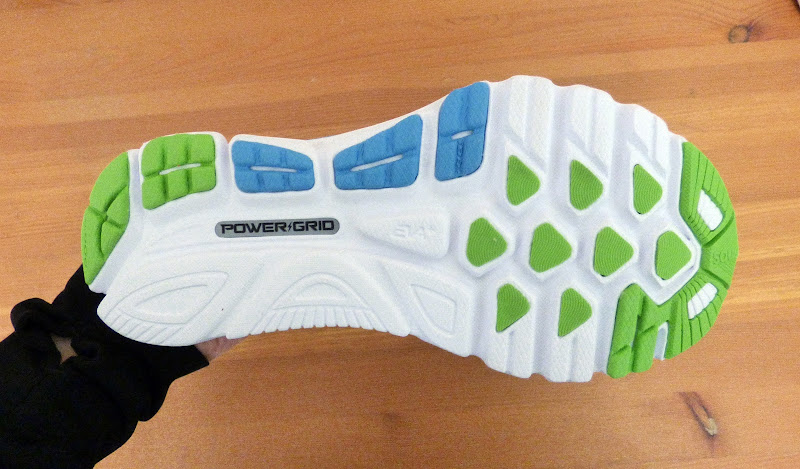 I had a spare pair of K5s in the closet that I'd gotten on clearance a few weeks back (which was good because now there is not one pair on the internet in my size to be found), so all that remained was to snag a pair of version 6 and get comparing. 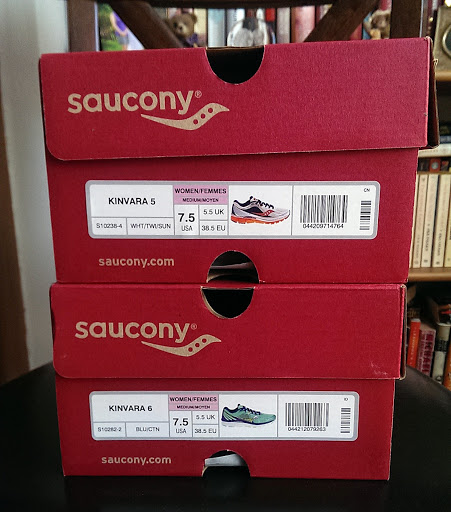 According to Saucony, the Kinvara 6 was only an upper update, & the sole itself has not been touched. Specifically, the changes they mention are:

Everything else on version 6 is supposedly the same as version 5. 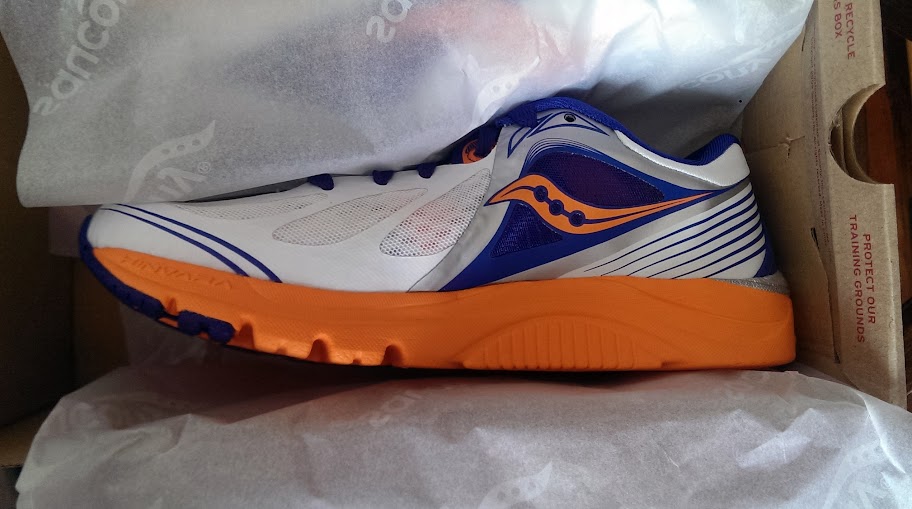 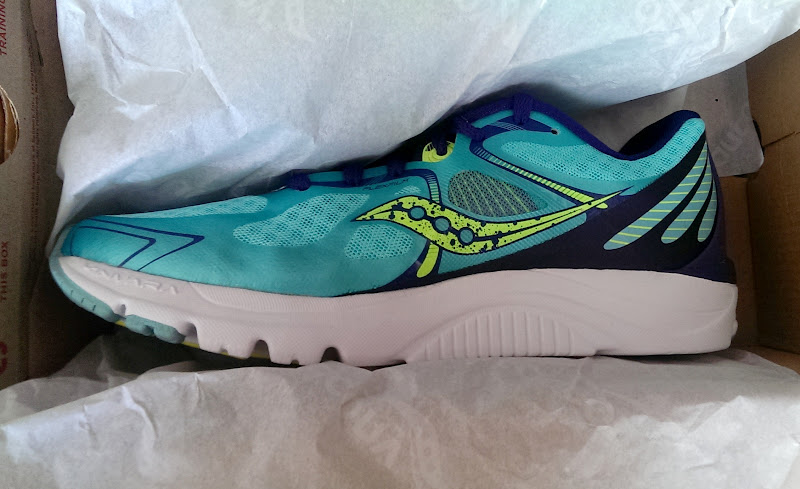 Like the K5s, the heel counter of the K6 uses a thicker, plusher material rather than FlexFilm, though this time around it looks like they're calling it RunDry™ rather than HydraMAX™. 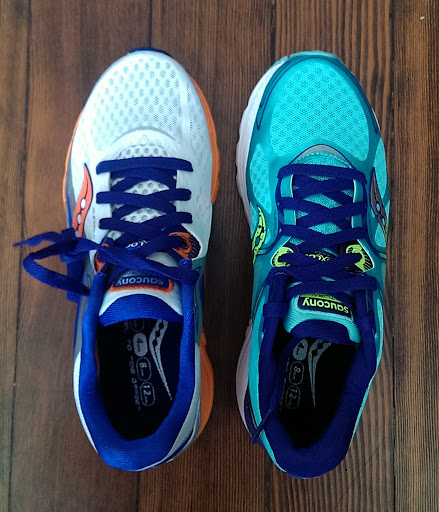 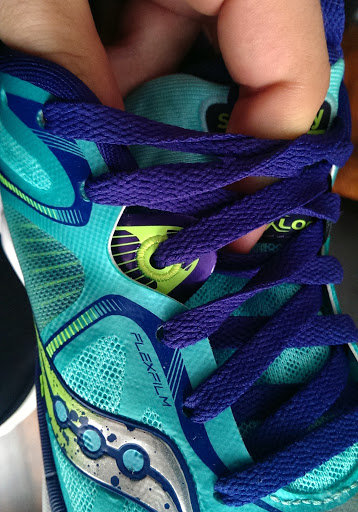 You can see how there have been some stylistic updates to the mesh & FlexFilm, but by & large the shoe still looks basically the same.

Oh, except for one very important thing: 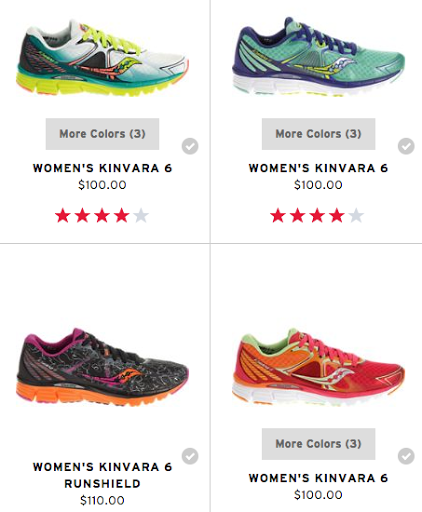 THANK YOU, Saucony, for moving on from the radioactive, highlighter-ink hot mess that was the Kinvara 5's color palette.

Like the K5s, the K6 features an EVA+ midsole ("for lightweight, durable cushioning"), a decoupled heel ("flexes throughout the gait cycle to create better traction"), & PowerGrid/Powerfoam ("to create a cushioned and responsive ride"). The extra carbon rubber (XT-900) on the middle outer edge and toe area that showed up in version 5 stays, as does the IBR+ blown rubber in the midfoot ("a lightweight flexible material that offers enhanced cushioning and a smoother transition"). 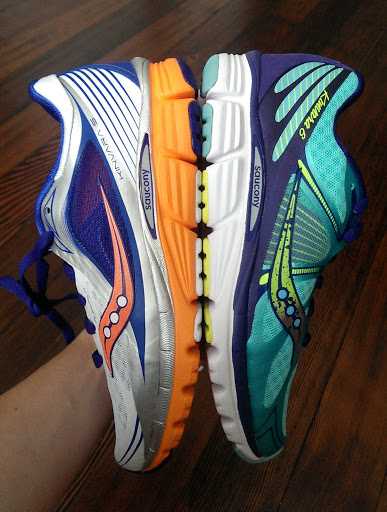 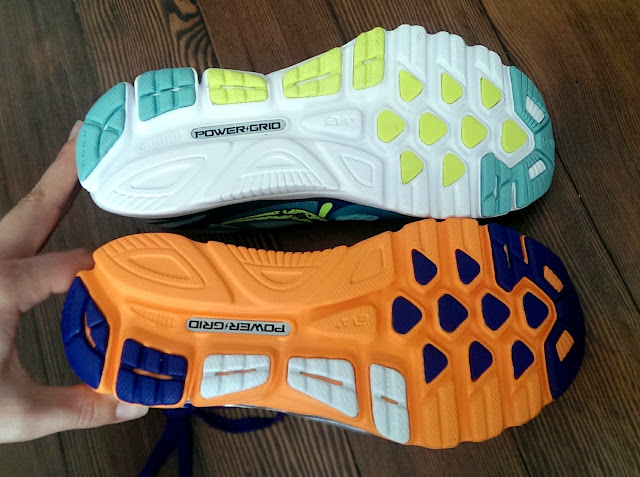 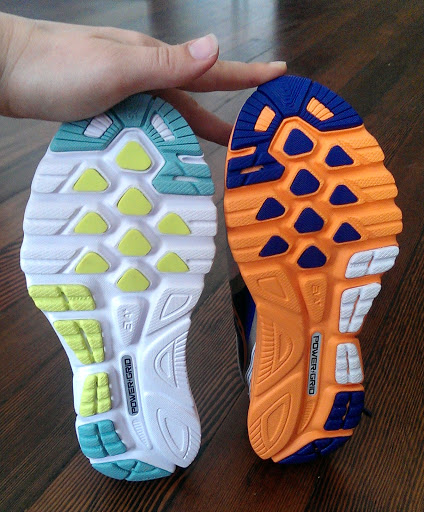 ***WARNING:*** This is the part where my quantitative/data analysis nerditry shines through. Gird your loins.

Officially, the weight of the K6 was supposed to be the same as the K5. However, testing that out is a bit trickier for me this time around because I have a new scale. It's just an updated version of the old one so in theory it should be calibrated the same way, just slightly more precise, but as soon as I started weighing things I ran into some question marks. 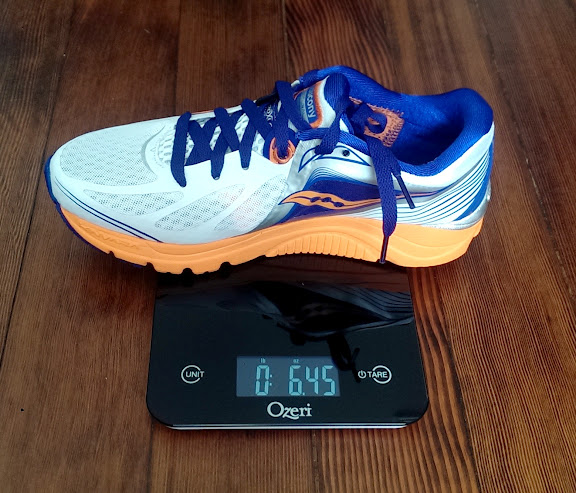 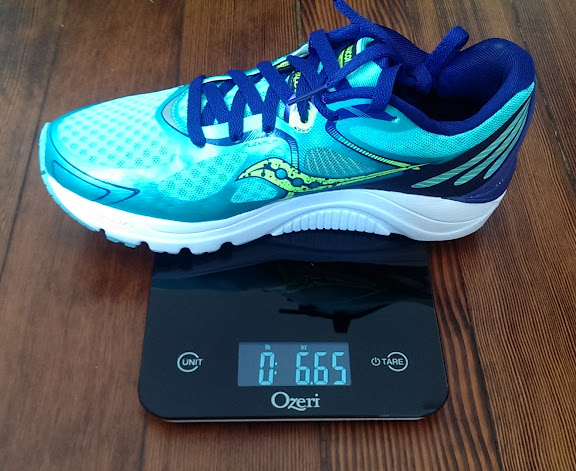 Every Kinvara (size 7.5) I've ever owned & weighed has come in at 6.6 ounces (except for one rogue pair of 4s). It could be that this particular pair of K5s is just another "rogue" pair, but since I was using a new a scale, I decided to weigh some old K5s just to see what happened. 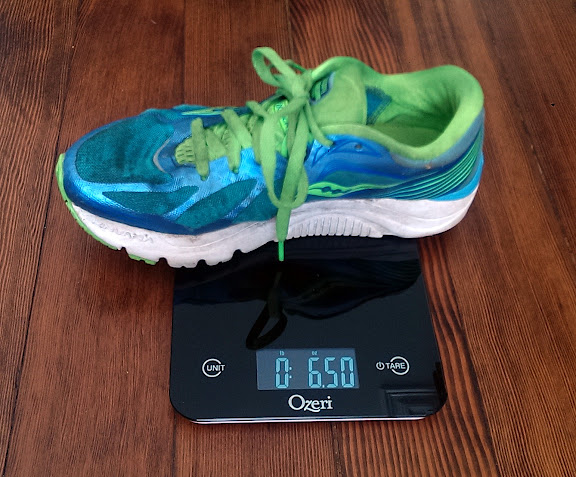 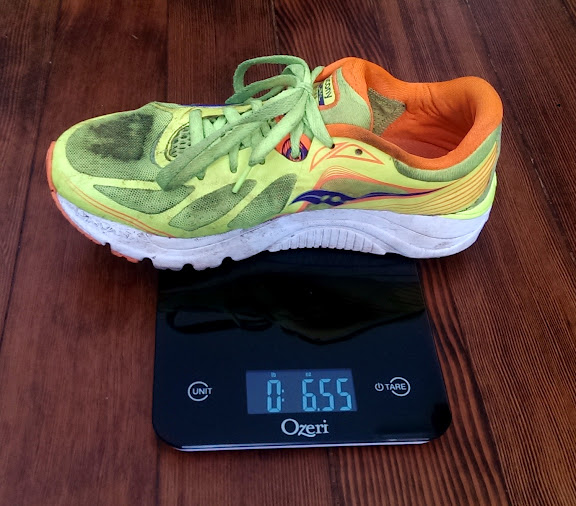 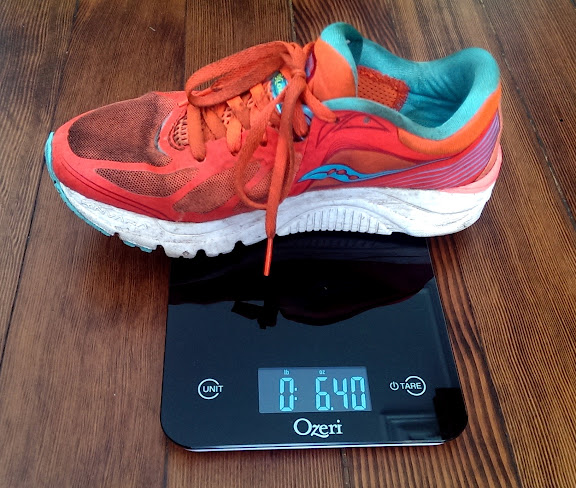 I have never once had an old shoe weigh in lighter than it did new (.2 ounces is a lot of rubber to wear off), so I'm tempted to conclude that the new scale just reads ~.1-.2 ounces lighter than the old one did. Which would put the Kinvara 6 at just slightly heavier than the 5s. (Though, if I were being really scientific about this, I would have weighed, like, five different pairs in case there's some slight variation the way there seemed to be with the version 4s. Sorry, not shelling out for that for a blog post.) 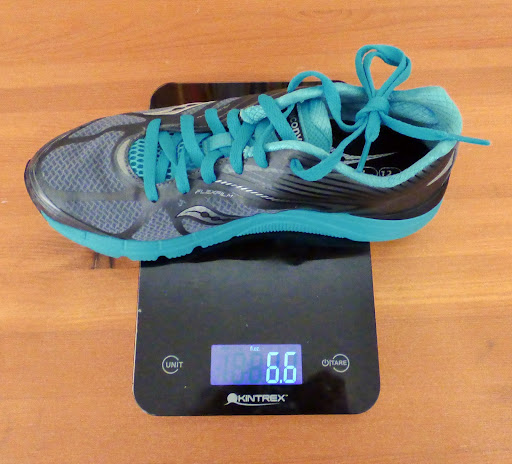 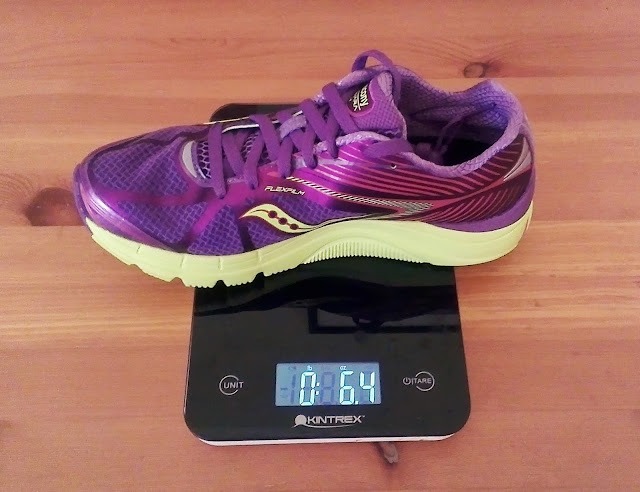 Two brand-new Kinvara 4s. After a year of use both still weighed the same as they did new.

When I first pulled on one of each and did a little bouncing around in them, I noticed two differences, both small but worth mentioning, I think. 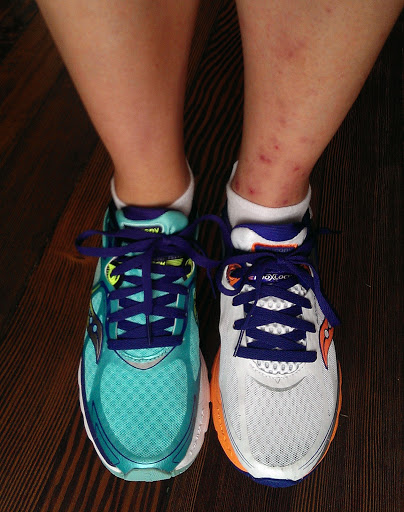 Before you ask: Bed bugs, while traveling for work. Do not recommend.

First, my heel felt like it sat a little deeper in the K6 than in the K5. I don't have particularly strong feelings about this one way or the other; it's just something I noticed.

Second, while the K6 feels just as wide and roomy in the toe box as the K5 (THANK YOU), it feels distinctly tighter in the vertical direction (ie, between sole and top of foot). Not uncomfortable, mind you; they just hug the middle of my foot in a way that the K5 doesn't. Something I have noticed about the 5s, having worn out three pairs now, is that as they get older and the midsole gets compacted a bit and the plush places in the upper collapse some, they start to feel significantly looser. I've often found myself a mile or two into a run and had to stop to tighten up the laces because my feet feel like they're sliding around some in the shoe. I've heard similar comments from others so I wonder if this change was strategic.

The marketing copy mentions an "Internal Bootie wraps the foot for a sock-like fit" and also that "Comfortlite Sockliner is a molded sockliner that contours the heel and arch, reducing pressures in the forefoot," so I kind of wonder if that's what that is.

Otherwise, no discernible differences. The K6 fit the same size-wise (slightly big; I wear a 7.5 in Kinvaras whereas in most other running shoes I wear an 8), the toe box felt about the same, and the shape of the shoe & the feel of the cushioning felt identical just walking around the house.

Part 2: Wherein I Put Some Miles on the Kinvara 6!

Posted by Angela Knotts at 8:04 PM