(**Quick Editor's Note** No, I have not stopped blogging--for behold, a blog post appears before you!--but it's been hard lately to find time to do it regularly, so I've been posting more frequent quick/short stuff--micro-blogging, if you will--over on Tha Insta. Just, y'know. If you ever start wondering what I'm up to when I'm not over here.)

I had a pretty sweet May of training with close to 180 miles, which is a lot for me these days. However, in June, work stress & travel was back with a vengeance, and while I did do *SOME* training, including several workouts and long runs, it wasn't the month I'd hoped for. PrideRun had always been one of those "maybe" races on my summer list; I'd been planning to target a fast July 4th 5K (PrideRun is NOT a fast course), and racing a hilly 5K five days beforehand seemed not conducive to running my best possible race on July 4th. On the other hand, PrideRun is *SO* much fun, cheap, really close to home, and always benefits a good cause (this year it was Gender Spectrum); since I wasn't in peak shape or anything & didn't feel like I'd be blowing a chance at a PR on July 4th, I decided what the heck, let's go have some fun on Pride weekend.

(Racing this weekend also worked out better logistically; Don's mother was in town for a long weekend, and racing Saturday meant that while she was in town I only had to do a short run on Thursday, a shakeout on Friday, race Saturday morning before anyone got up, and rest on Sunday; not racing would have meant 8+ runs every day, including a double-digit workout on Friday and a long run on Sunday.)

I honestly went into this race with no expectations other than to just run my best & see what happened. I knew I had a chance at a podium since it's such a small race, but I didn't care that much. Having run this race twice before (the 10K in 2011 and the 5K in 2012), I knew what to expect and was mentally ready for the long, steep, rocky-and-potentially muddy second mile. (I like to joke that this race is a one-mile XC race flanked by two downhill road miles.) At the start I tried to channel the wisdom of Steph Bruce as I had at Statuto Race, that there's only two things you can control on race day, your attitude and your effort, and just tune out any other thoughts, and it mostly worked.

Setting up for the race

Setting up the start 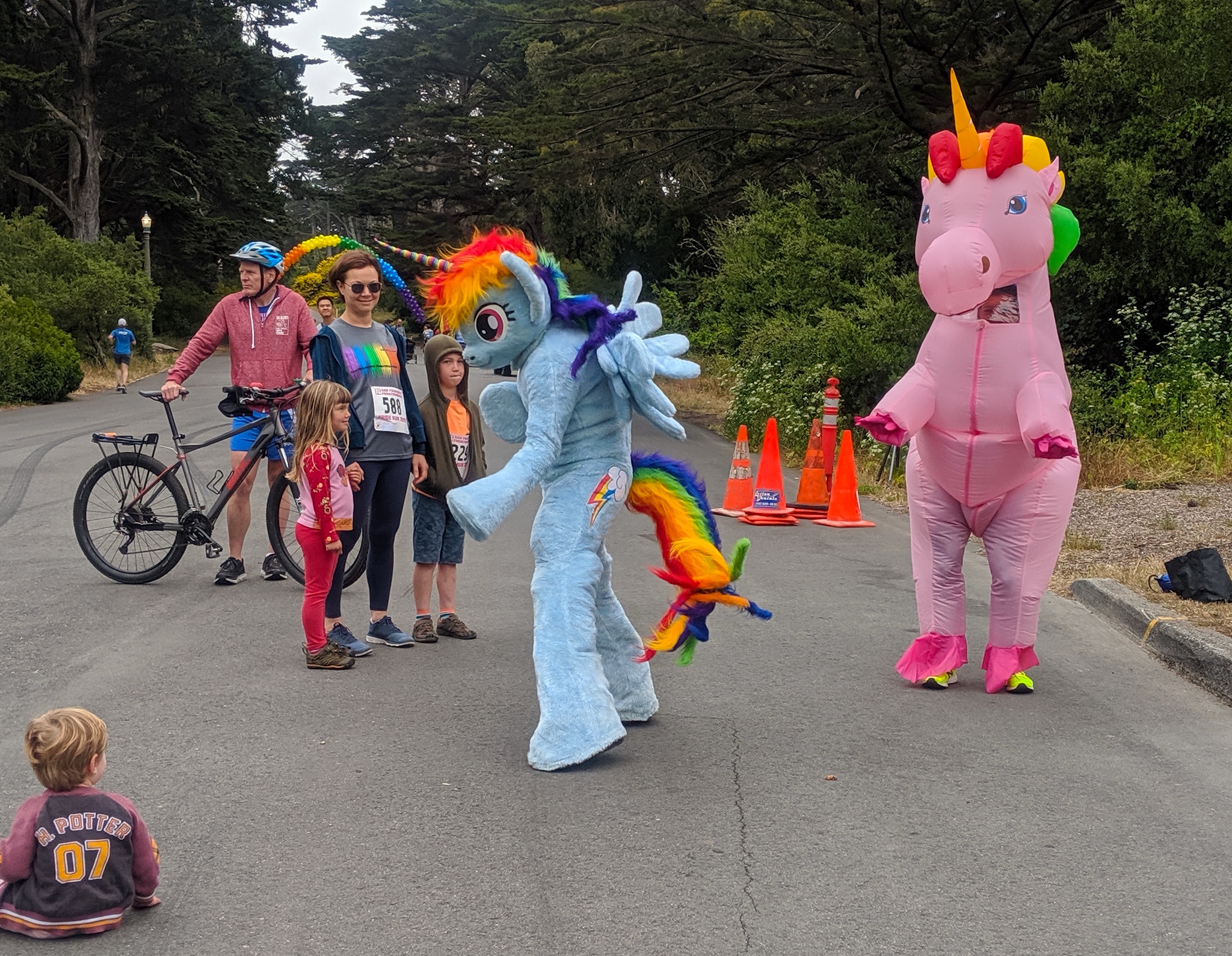 Before the main event there's also a kids race, which is pretty effing cute:

The 5K and the 10K go at the same time, with the 10K running two laps of the 5K course, but the starts are off-set a bit since the loop part is only 3 miles. (The 5K runs the .1 before hitting the loop, and the 10K starting .1 back from there gives them the .2.) I lined up near but not right at the front and saw maybe 4-5 other women around or in front of me & decided I would try to keep an eye on them unless any of them were obviously much faster than me right out of the gate.

Ready to do, y'know, something.

I knew from experience that if you want to run a good time in this race, you really HAVE to run the first half-mile or so too fast. It's noticeably downhill so it's to your benefit to bank as much time as you reasonably can before the steep-and-slow second mile. I think my 5K pace right now is around 6:50 so I let myself run that first downhill section at ~6:30ish pace, which felt very comfortable. I slowed a bit as it flattened out and then a bit more as the hill started and hit that first mile in 6:52.

Despite my efforts I'd sort of lost track of the other women. One, I thought I had saw run way ahead. Then in mile 1 there were maybe two or three who were staying in my general vicinity so I decided to try to stay with them during the hard second mile if I could and then maybe see if passing in the fast downhill third mile was possible. This helped me a lot in mile two as we started to go up and the footing got a bit treacherous. Their pace was definitely pushing me but I was able to stay with them without feeling like I was jeopardizing the end of my race. I even tried to see if I could push past them a little but couldn't quite shake them without doing something that felt stupid with half the race still to go.

That part of the course is not only steep and muddy/rocky but also pretty narrow unless you want to get way off the tangents. It's a small race so this isn't a huge problem but it can make it hard to pass if you're running in a tight pack. Plus the footing makes running close together potentially dangerous--twice I saw runners trip and go down, one almost right in front of me and the other two girls I was running with. (One nearly tripped over him.)

Mile 2 ends almost exactly at the top of the hill and I saw a 7:23 split on my watch. I didn't remember how fast I'd run that mile in 2012 so didn't have a particular time in mind, but at the time I remember thinking, "Oh that's not bad actually." I had also been thinking that mile 3 could potentially be my chance to shine, given all the downhill running I do, that when we hit the top of that hill I'd just light it up & hurl myself downward to the finish. However, I underestimated just how trashed my legs would be from the uphill and to be honest they felt a little like Jello! So, instead of hurling valiantly toward the finish I felt more like I was scrambling.

Thankfully I did manage to get my legs back underneath me and pick it up. Of course this is always the hardest part of a 5K and I was fighting back awfully hard against that little voice that always starts whispering around ~2.25 miles that "Eh, this race isn't that important, no need to kill yourself here." My strategy at that point was mostly just to tell it to shut right the hell up and run as fast as I possibly could.

I think there will be more photos coming eventually (there was at least one photographer on the course) but in the mean time please enjoy these stills from the finish line video (if you can't tell, I am the one bookin' it on the left side):

I didn't catch my mile 3 split at the time (6:44) because I was focused on sprinting to the finish (last .13 @ 6:31 pace), but given my not-amazing fitness and the fact that it's a slow course I was pleased to see that the clock was still well under 22:00. I finished feeling appropriately awful, stumbled around for a while catching my breath and searching for water, took some pictures of the finish line, & then sat around waiting for the results. 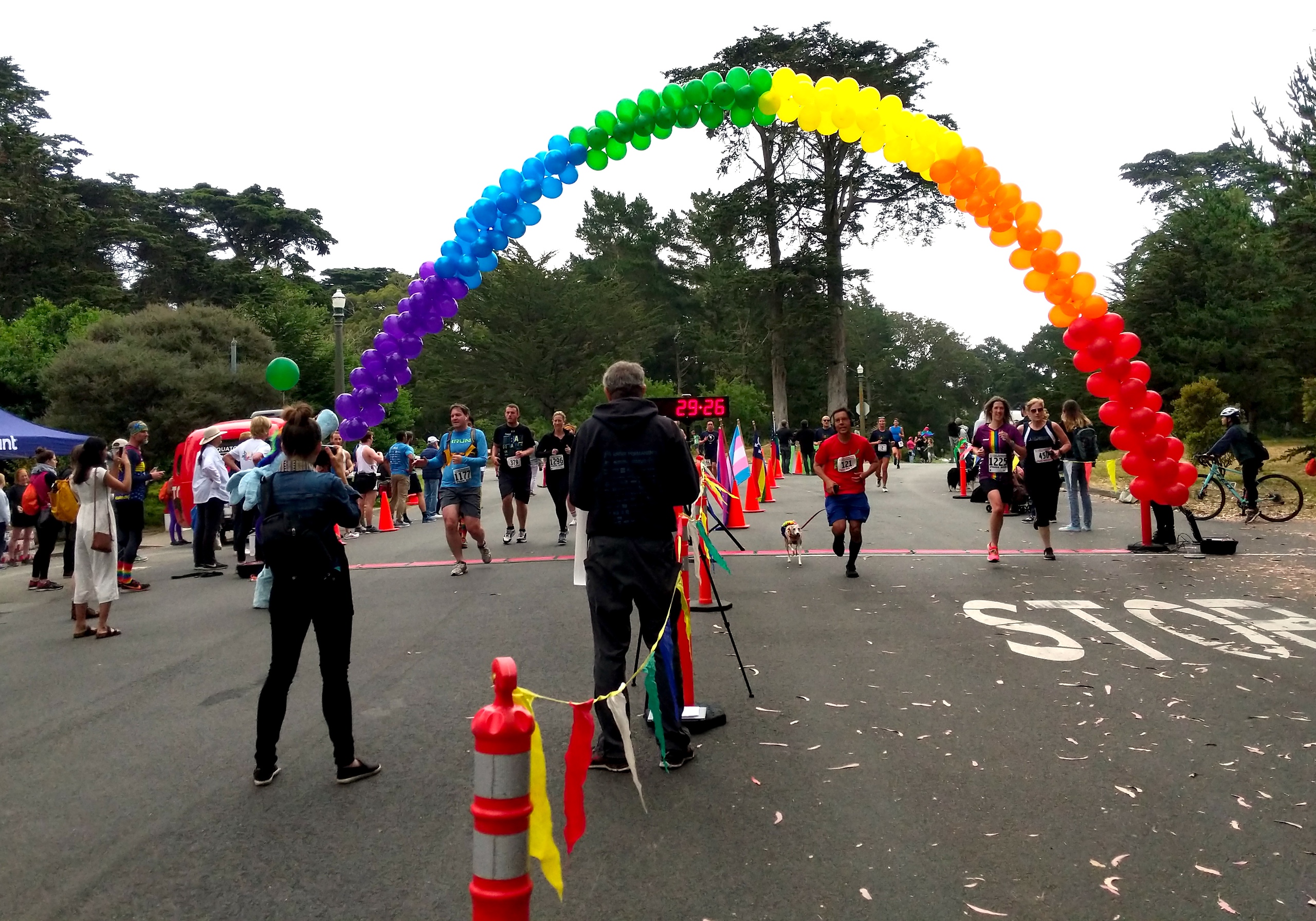 I swear this unicorn did not stop dancing. ALL. DAY.

I'd been preparing myself to be okay with a 22:00+ finish given my current fitness & the giant hill, so this was a pleasant surprise. (For comparison, my November Turkey Trot, racing all-out on a completely flat course was 21:46, so I can at least say I'm in better shape now than then!)

For funsies, I looked up the data from when I ran the 5K in 2012, because I thought it would be neat to see how my uphill split compared. -- on that day I ran 21:36, but that was about four Garmins ago & alas I think my watch actually died during that race. All three times I've run this race, going up that hill I've thought, "This is TERRIBLE, I am never running this race again!!" but I always get over it after and think, "Aw, I love this race!! I wonder how much faster I could do it next time!"

But yes. If you're in SF on Pride weekend, you will never see people having so much fun at a race. Highly recommend.

This year has the BEST SHIRTS, fight me

Heyyyyy I did a thing!

Pride Run is put on each year by the SF FrontRunners, the founding club of a now worldwide organization of running and walking clubs dedicated to the LGBTQ community. Every Pride weekend, they host a 5K/10K in Golden Gate Park with proceeds going to that year's selected LGBTQ charity. It's a small event (less than 1,000 finishers between the two races) but you CANNOT beat the energy, outfits, or unicorn dance moves.

Deadlines/sellout factor: When I signed up on Thursday the website said that there were 53 spots left but that it would probably still be possible to register on race morning. They did announce that this was a record-breaking field this year in terms of number of people.

Parking is plentiful & mere yards from the start. Bib pick up was quick and easy. There is a bag check if you want it, but parking is so close & easy that you might not even need it. The flush toilets by the polo fields have been open all three years I've run, plus a couple more port-a-potties. The staging area is fun with dancing rainbow unicorns & DJ Hot Toddy spinning tunes. Also free post-race brunch!

As I mentioned, this race is really an uphill XC mile flanked by downhill road miles (though actually I think the hill starts in mile 1, so it's really maybe only the first .5-.75 miles that's downhill). Though you will probably never PR at this race, you can make up a good amount of the time you lose in mile 2 by taking advantage of the downhills in miles 1 & 3 if you practice downhills a lot. Most of it is sidewalk open to other runners/walkers in the park, so just look out for people not in the race (there weren't many that I noticed). It can also be narrow if you end up in a clump, so try not to trip/shove anyone.

The swag has varied over the years--sometimes a tech T-shirt, sometimes tech shorts, sometimes a logo towel. This year it was a shirt with a pretty cool design, which is I think the best thing I've ever gotten. There are no finishers medals but there are both overall medals and age group medals three deep in 10-year increments. (I'm only ever in the running for these at small races, but I have to say, the closer you get to 40, the more satisfying it is to snag one when you're running against 30-year-olds!)

This is one of my favorite small local races. I've enjoyed it every time & given how close to home and logistically easy it is, I imagine I will run it many times again in the future!