I know, I know -- this race was like forever ago at this point & I'm sorry it's taken me so long to get it together & write a race report.

It's not that I think you all sit on my home page hitting refresh every ten seconds or anything; my bigger concern was that, because I've been so anxious & freaked out intently focused on Clarksburg & so vocal about what I wanted to do there, someone might take my blog silence in the days following the race as a sign that I either didn't survive it or had such a horrific race that I've been wallowing on the couch in my bathrobe for the last three days drowning my sorrows in rocky road & gin.

No worries. I've just been really busy the last few days, and also waiting for race photos to get posted. (Sorry if I worried you.) Thankfully, I was able to steal a lot of what I needed for this post from the one I wrote about Clarksburg when I first learned about the race. So here you go:

The Deal: A fundraiser put on by several Clarksburg community groups (Boy Scouts, Fire Fighters, Cub Scouts, The Soccer Club, & Clarksburg Schools) who volunteer to run it. Also, the half marathon is a PA USATF Championship race.

Sellout Factor: Unlikely, as far as I can tell; PA USATF grand prix aside, it's a small local race with race day registration.

To quote the site, "All courses are USATF certified, flat, paved and scenic past area wineries and farms." Flat? Yes. (The biggest hills on the 20 mile & half mary course are in the ~0.03% grade range.) Paved? Yes, but beware that these two-lane country roads do have a noticeable camber. It didn't bother me or mess with my stride at all, but I've heard that it's bothered other runners enough to turn them off of running it again. Scenic? Um, no. Except for some trees with some pretty fall foliage, there is nothing to see (and sometimes smell) but mile after mile of freshly fertilized empty fields. Technically, they may be wineries, but don't think for a minute that this is going to be like one of those hoity-toity boutique races through Napa or Sonoma.

The nice thing about the course, though, is the fact that it's an out-and-back with only a few turns -- easy to memorize and easy to run tangents on (my Garmin registered 13.15 miles), if you can mentally tolerate the long stretches of unchanging scenery. (The monotony didn't bother me -- I actually wouldn't mind running it again, but some runners said they were bored out of their minds.)

Relative to the number of runners, there is not a ton of parking, so I'd carpool or try to arrive early. Packet pickup & race day registration were easy to find & well-organized. There were plenty of port-a-potties, though this was not immediately obvious because they were scattered around different parts of the race area (3 here, 5 there, 2 over there). The races start later than most -- the kids' races started at 8:30, with the 20-miler at 9:00, the half at 9:15, the 10K at 9:30, & the 5K at 9:45 (though everything after the 20 miler ended up getting pushed back 10 minutes, but I don't think anyone cared). I didn't take advantage of them, but it was also nice to know there was a free lunch & showers after the races.

Based on the weather report, I was expecting low fifties & cloudy, so I'd brought a few different layering options, including arm warmers, gloves, and a headband with ear covers. There had been a chance of rain earlier in the week, so I also wore my rain shell as a warm up jacket. It was chilly when I arrived at 7:45, but started warming up quicker than I'd expected. Completely by chance, Sesa ended up parking directly behind me, so we finally got to meet! We chatted for a bit & then headed over to the start, & on the way ran into Katie & Jessica. S, K, & J were all running the 20 miler as a training run, so their race started at 9:00. We said goodbye at 8:56, I watched them start, then took off on my warm up. 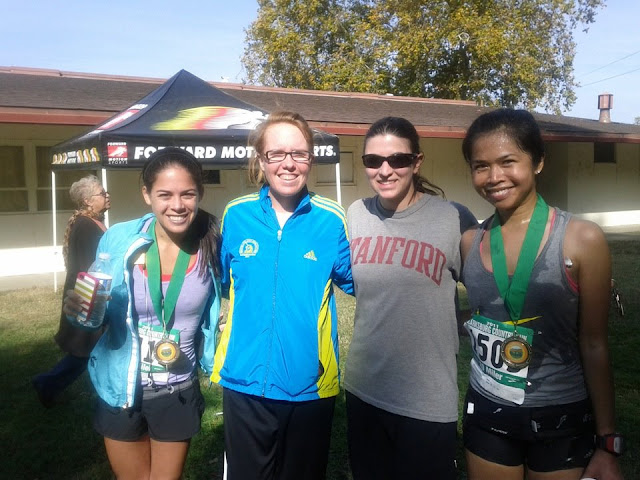 Jessica, Katie, me, & Sesa after the race. Totally stole this picture from Sesa, btw. ;)

Which is when I started to realize that in addition to being not terribly cloudy, it was also definitely not low fifties. Over the course of 15 minutes of jogging, I shed one layer after another until I was down to a sports bra & booty shorts & still uncomfortably warm. (I couldn't even tolerate my headband & just wrapped it around my wrist for sweat-wiping.) At the start, two separate women (wearing the long-sleeved finisher shirt & tights) asked me if I wasn't freezing. I was sweating just looking at them.

Towards the end of mile six, I started to feel some tightness in my chest, which made me nervous. By the time I hit mile seven, there was no denying that I was having a full-blown asthma attack. BOO! >:-(

I've talked about running through asthma attacks before. Using my inhaler 10-20 minutes before I run virtually always prevents attacks, so I rarely carry it with me. (Seriously - I haven't had an attack during a race since high school.) If I do have an attack, easy/moderate running is doable for a short while but not pretty or fun, and fast running is entirely out of the question. So as soon as I realized what was happening, I knew what it meant for my race. Somewhere in the back of my mind, part of me was crushed and painfully disappointed; the rest of my brain, though, was going into cold-blooded damage control mode.

Immediately, my "A" goal shifted from "break 1:40" to "avoid an ambulance ride." I still had over six miles to go at that point and was not at all sure that I would even be able to finish. Mentally, I started preparing myself to stop at an aid station and ask a volunteer to call the bus. I have never DNF'd before, so this was not a prospect that appealed to me greatly. Basically, I decided to run until I couldn't.

The next mental battle I had to fight was walking. I've never wanted so badly to walk. I would tell myself, "When you finish mile 9 you can walk. Okay, that wasn't so bad, you can make it to mile 10. Then you can walk. Okay, now try to get to mile 10.5. See if you can get to 11." In this fashion, I made it all the way to the last water stop around 11.5 without walking. I walked long enough to drain two full cups of water, then started running again. Even then, I wasn't sure I could finish, but I kept telling myself I knew I would anyway.

(Also, you know all the horribly violent thoughts you have about people shouting "You're almost there!" at mile 9? Try to imagine what that's like when you feel like you're breathing through a coffee straw. That and people at mile 12 entreating you to "Kick it in!" when your primary concern at the moment is avoiding hypoxemia.) 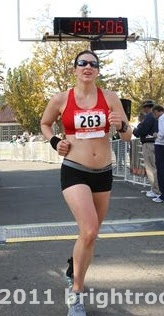 I don't know how I finished. I don't remember much about the last mile, except attempting over and over again to count to 100 and repeatedly losing my place and starting over. I do remember attempting some sort of kick when I saw the finish line & noticed that my pace as I crossed the mat was 7:19; I'm still not sure how I managed that.

The most ridiculous part was that, even after all that, I was within a minute of a PR. Granted, my current PR (1:46:10) is old and outdated and I am in far better shape now, but still. It wasn't even as bad as when I ran RNR San Jose last year with three injuries.

I grabbed my medal & two cups of water from the super-cute cub scouts at the finish (seriously -- I'm so bummed I didn't go back and take a picture of them. They were super cute and so excited to get to hand out medals & water) & stumbled/crawled back to my car like a drunk person & proceeded to suck on my inhaler until I felt human again.

(Do you like that fake smile, by the way? I had promised myself I would, for once, have a finishing picture where I was smiling, no matter how I felt physically or emotionally. "Woo, only .25 more miles to my drugs!!")

And really, that was the worse of it -- as soon as I could breathe again, I felt totally fine. (Of course, I then proceeded to have post-race brain damage & lose my keys for half an hour, which caused me to miss Sesa, Katie, & Jess finishing. My keys were in the keyhole of the open trunk. Right above my head. For half an hour.)

I saw Katie first & we commiserated about our un-fun runs. We also both agreed that in sheer defiance of the laws of nature, the course had somehow managed to have a headwind in pretty much every direction. It was sort of comforting to know that I hadn't been hallucinating that due to lack of oxygen. Although I think that without the asthma attack I definitely would've had a PR and come in very close to 1:40, I'm not 100% convinced I would've broken it. Even though it was probably only around 65°, I was running really hot (it was pretty sunny & most of the course was unshaded) & fighting at least some wind in every direction (!). Yes, I held a good pace for the first few miles & probably could've held it for a while longer, but my heart rate was up near 10K range for a lot of those first six miles, and I was having a little tougher time overall than I've had in most of my pace runs. I think I would've had a strong time, maybe 1:41-1:42ish, but if I'm really honest with myself, I don't know that conditions were right for me to run 1:39 on that particular day.

Schwag: A lovely long-sleeve tech shirt in hunter green, and attractive finisher medals for the half & 20 miler. Racing in the finisher shirt is always a bit sketch in my opinion (though admittedly a minor offense as running faux-paus go), but I thought it was extra weird at this race how many people were running in it given how warm it was. 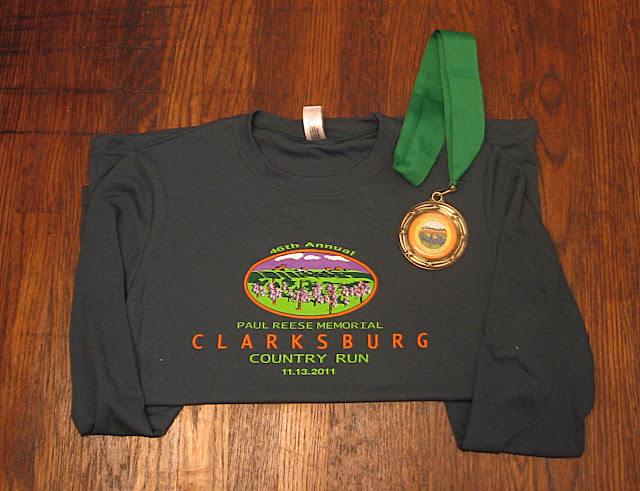 (I know it looks kind of gray in this picture, but it really is a beautiful shade of hunter green.)

So...given that this was supposed to be my re-match race after the death march at RNR SJ last year, you'd probably expect me to be pretty upset about how things went down Sunday. Yes, I'd be lying if I said I wasn't bummed about the asthma, but in spite of that, I'm in a pretty good place about it now. In fact, I'm actually excited about a bunch of things:

So yeah. The only question now is, When is the re-match of the re-match? Because there is still a 1:39:59 half in me just begging to get out. Far from discouraging me, what this ill-fated Clarksburg race actually did was let me get all the crazy-frazzled-anxious-nervous feelings out of the way. It's confirmed for me that, yes, this 1:46 PR business is silly at this point, and (barring freak medical problems) I could probably run a faster half any day of the week. It's given me confidence that 1:40 is within reach, even if it takes me a few races to actually make it happen.

Right now I'm too focused on CIM to think too much about when & where my next half will be. I know I'll definitely need a good bit of time post-marathon to rest & rejuvenate & generally take some time off mentally from structured training. But come spring 2012, it is ON, bitches!