To summarize some semi-relevant stuff I've posted in the past, I've only really ever run one 5K in my adult life where I was healthy and in good shape & training kinda-sorta heavily (to the extent that I ever train "heavily"), which is where I set my current PR (20:44/6:40 pace) in May 2012. It was so much faster than nearly every other 5K I've ever run that after a while it didn't really feel real, like "WHO ME RUN MULTIPLE 6:40 MILES IN A ROW? Phhhbbbt, that's not a thing that actually happened." Well, after massively PRing the marathon in December, I figured, what the hey? Let's take a crack at thing and see just how sturdy that dusty old PR is.

So, I registered for PrideMeet on June 17. (ProTip: If you want to run a fast, accurate 5K, do it on the track. Just don't weave too much.) I was in 60/40 not bad shape going into it in early May, then spent about 6-7 weeks adding some serious speed workouts. The workouts were tough but made a nice change from marathon training, and other than a sketch right calf muscle, I felt good going into the meet.

One sentence race recap: I ran a 6:52 mile which felt weirdly easy, then a 6:41 mile and still felt good, then proceeded to pull my calf so badly I couldn't put weight on it for several days. {Shakes fist at sky} Sure, I was bummed and frustrated, but another part of me could not believe I had run those splits and felt so good doing it. Sure, the plan had been to run this one 5K and then get serious about San Jose half training (10/8), but somehow I just could not let it go. What if I let the calf heal and run another?? Could that seemingly-untouchable PR seriously be about to fall??

And you know where this leads.

Tuesday, July 18 was soon circled on my calendar.

There were a few tricks involved. One, I had to get my leg healed, and I would not really have time to do that AND run huge volume. Two, I'd never run a week day or evening race as an adult. Three, I was scheduled to be in Sacramento running a workshop that day (ie, likely a more intense, busy day than average). But 5K training and half training aren't THAT different, so I added the July 18th meet to my RunCoach profile as a non-goal race and figured I'd just play it by ear.

Not even joking, by the time I left Sacramento at 4pm on the 18th, I still hadn't made a decision. My calf felt good and I'd brought all my clothes, but realized that day that I hadn't brought my watch, so it would be go tech-free or pony up for a basic stop watch so that I'd have at least *some* sense of my pace. (I wish I could say I'm good enough at the 5K to run it by feel, but alas that is not the case.) It had been a long day and I had not slept much the night before and honestly I kind of just wanted to go home and sit on the couch, but another part of me was like, "Do the hard thing. Do the brave thing. Choose the bigger life."

In the end I think I made the decision as I rolled up to the literal fork in the road between heading to San Rafael or back to San Francisco, mostly based on the fact that if I didn't run in the meet, I probably wouldn't end up running at all that day, given how late it already was. So off to Terra Linda High School it was.

After a quick stop by Big Five Sports to spend way too much money ($25) on a watch that looked way too fancy and did way too little in my opinion (did you know that most basic sports watches won't record your manual laps for you? I did not), I rolled up to the high school, found my way to the track still in Fancy Lady Presentation Clothes, and signed up for the 5K just as the first event was starting.

I knew going in that these meets were low key affairs, but I was relieved to see just exactly how low key--maybe 20 people, a huge range of ages and fitness levels (including kids!), and everybody clearly just out there to have fun. (At least two people ran all six races!) 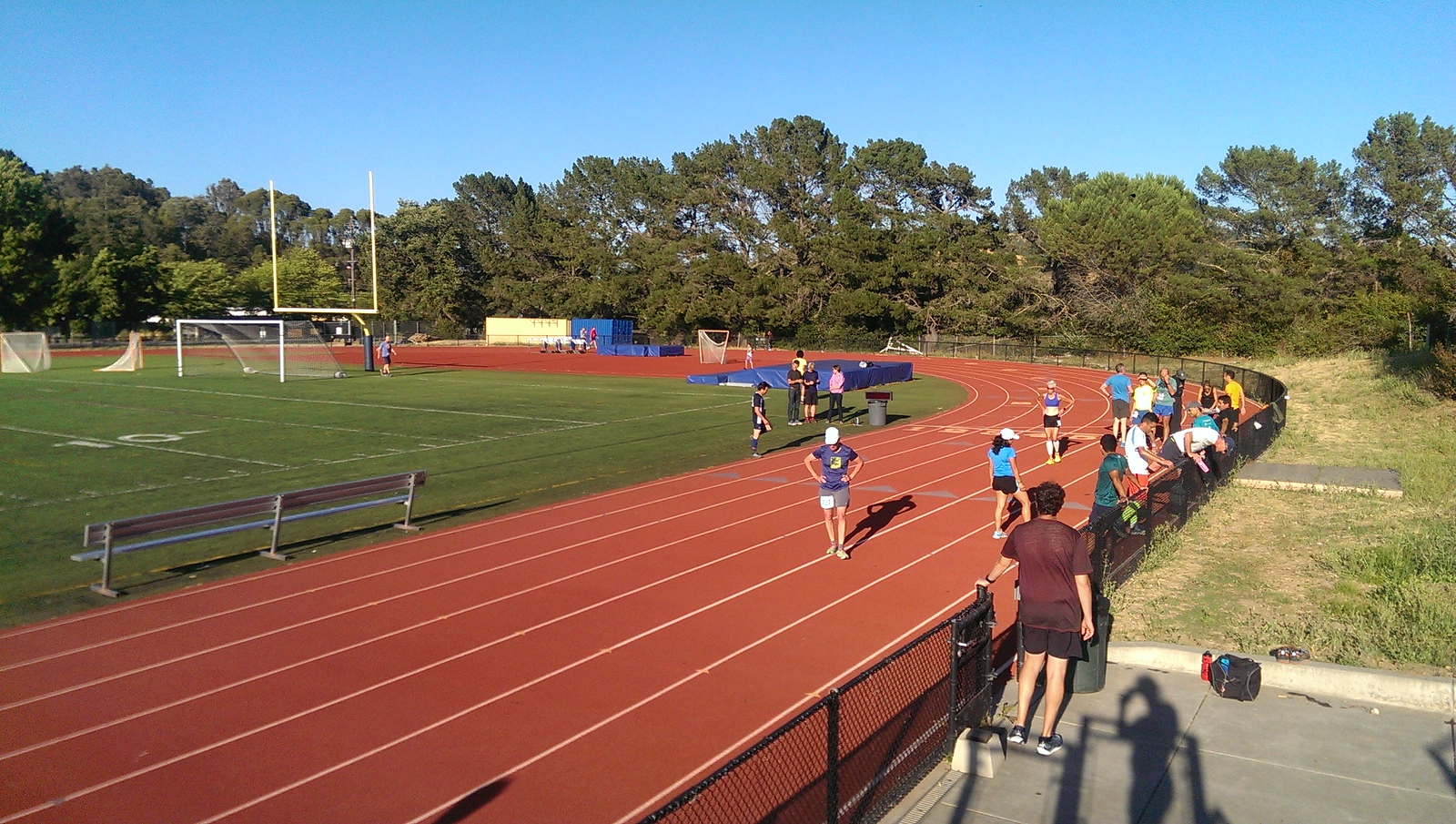 I got changed and warmed up while the rest of the races went off, trying to strike a balance between warming up enough vs. not asking too much of my calf. I felt pretty good and as the field of maybe 8-10 of us lined up for the concurrent 3K & 5K races, I thought, Maybe this was not a mistake. Maybe I'll have a great, super fast race and all will be well.

Things did not get better from there. I hit the first mile in 7:01, I think, and felt like I was going to die. At that point, to be honest, all I wanted was to quit--I'm not going to get what I came here for, so what's the point?--but more or less forced myself to be a good sport and at least finish the race with some integrity. For better or worse, my calf muscle took care of that issue for me; as I headed into the last 100m to finish mile 2, I felt a sickening twinge in my right calf, the same one that sabotaged me at PrideMeet. It wasn't quite as bad, but after a few more steps I thought, "There is just no reason to risk this, stop it, now," and stepped off the track in pretty much exactly the same place as at PrideMeet. Apparently my second mile was ~7:20 (and I have never run a 5K slower than ~7:05ish average pace, even as a fresh-faced newbie road runner, even completely detrained and barely post-injury), so there was really just nothing on the line to balance out the "Heyyyy how about I DON'T 100% re-wreck my leg this time" feeling.

The bad news is that I spent a good 20 minutes being like, "Do not get in the car and sob, do not get in the car and sob." Oof. That was a bit rough. The good news is that the Tamalpa Runners were just the nicest most friendly people and so kind and empathetic as I was sitting there just barely not losing my shit. Of course, everything seems super clear in retrospect; I should have stuck to the original plan, which was run PrideMeet 5K for fun, then concentrate on the half. Instead I let the stupid calf injury highjack my rational decision making & got caught up in feeling like I had something prove, like I needed revenge on the track 5K somehow. Which would have been maybe not so terrible had I not injured myself at PrideMeet. I should have said, "You know, it would be cool to run another 5K soon, but that calf needs to get better, and a month is just not enough time to both do that and keep up 5K fitness."

(Also, I really should have suspected that an evening race at the end of a long day on potentially not enough sleep would never be optimal.)

So, at this point I'm doing my best to just put it behind me & say, "Look, you gave it a shot. The calf is clearly still not quite 100%. Time to let the 5K PR visions go for now & start concentrating on San Jose without worrying about how to squeeze in non-goal races." I only have one other race on my calendar before RNR San Jose, Race to the End of Summer 10K (also in San Jose), and I may think about throwing in another 5K at the end of October (several weeks after the half).

Like I said, these meets happen about once a month during the summer in San Rafael, hosted by the Tamalpa Runners.

Location: It sounds like they usually happen at the San Rafael Track, but this summer are being held at Terra Linda High School due to construction.

Date: Tuesday evenings once a month, May through September

Deadline / Sellout Factor: I get the sense that as long as you sign up for a race before it starts you're good.

Parking: Plenty of easy parking near the track in the HS parking lot.

Staging: All you really need to be able to find is the table by the finish line where you sign up and get a bib. It was super easy & everyone was friendly and helpful.

The Course: It's a track, so pretty much as good as it gets in terms of flat & fast. As per usual we started at the waterfall line near the 200m start, with the finish in the normal track finish spot.

Schwag: Just your own personal pride!

I think these little meets make a great time trial opportunity if you're looking for something low key & cheap/free. 10/10, would race again.

Posted by Angela Knotts at 9:49 AM