This race was stop #4 on my 2011 10K Summer Tour (Santa Cruz, SF Pride Run, Bad Bass, and Summer Breeze) and put on by the same group that also did Bad Bass in July. I've been looking forward to it for a while because it's the first flat 10K I've run since Santa Cruz in April, and I was excited to see how much I've improved at this distance since then. Even better, I haven't suffered any debilitating injury scares lately, which is kind of a first this year as far as race weekends go.

Deadline: Race day registration if space (there was space in all distances this year)

Sellout Factor: Unlikely; it was a small event with race day registration 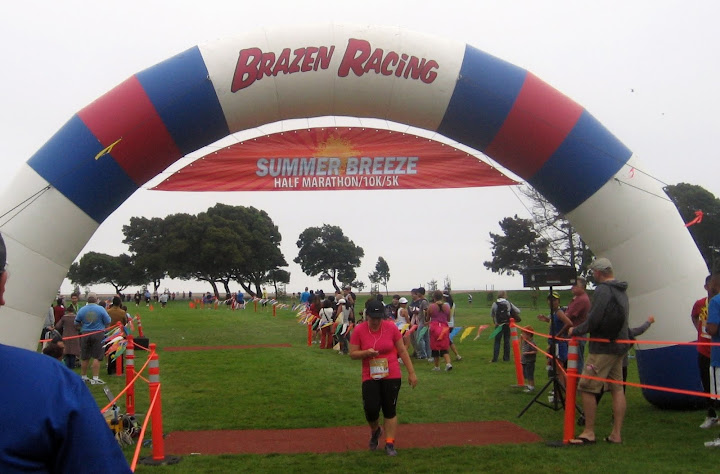 In the pre-race email, the race director noted that parking would be limited, so carpooling was encouraged. I suppose it's limited relative to the number of people participating, but when I arrived at about 7:30 or so, there were still a good number of public spaces left (though many of them were a good 5-10 minute or so walk from the start). All free, though.

As with the other Brazen races, you have the option of local pre-race packet pickup on Thursday and Friday or race morning pick up (which is what I did since I don't live super close). As with Bad Bass in July, the pick-up table was well-labeled, well-organized, and efficient, and there's a free sweat check a short walk from the start/finish. The T-shirt and goody bag station (also well-organized and efficient) was just a few tables over from the sweat check, & you could pick them up before or after the race.

Something I neglected to mention in my Bad Bass report is that part of the way that the group keeps race costs down is by using volunteer photographers instead of hiring a professional company. In my opinion, this actually works out better for runners; at most bigger races I've run, there's usually a photographer at the finish and maybe one other spot on the course, but at both Brazen events there were people taking pictures at several different places along the course as well as the finish. After the race, the photographers upload all their pictures to Brazen's online album, and runners can download them for free. The trade-off is that the pictures aren't indexed or tagged by your bib number so there's no super-fast way to search for yours, but I've found it's actually pretty easy to just scan each album visually. To me, this is MORE than worth not having to pay for professional pics or settle for low-resolution, watermarked proofs. I wish more races would do it this way. MAD PROPS to all the volunteer photographers, for sure.

Not to mention all the other volunteers--enthusiastic, friendly, helpful, knowledgeable, etc. I love volunteers who inspire me to think about volunteering at a race sometime when I'm not running. (Is it bad that I never have? Probably.)

Brazen is really a trail race group, so this course was a little bit of an outlier for them in that it was flat, fast, and almost completely on a paved trail (with the exception of 80-100 yards of grass at the start / finish & a few gravel patches). Rock! The only slightly challenging bit was that the trail isn't very wide, considering it was an out-and-back course. For the most part, I didn't have much trouble, but in the last few miles I did have to do a little weaving in and out of 5K walkers. It also meant that you'd end up on the opposite side of the trail from any given aid station either going or coming; not much of an issue for me but I could see how it could be a little tricky if you ended up having to cut through a bunch of runners coming back to get across to the tables. People who are more used to road races should also be aware that because of trail accessibility issues with the half marathon course, it isn't always possible to have regularly spaced aid stations; this year there was a 3.5 mile stretch without fluids, so half mary runners were advised to carry a bottle with them. Still, overall, a very nice course, particularly for chasing a PR. 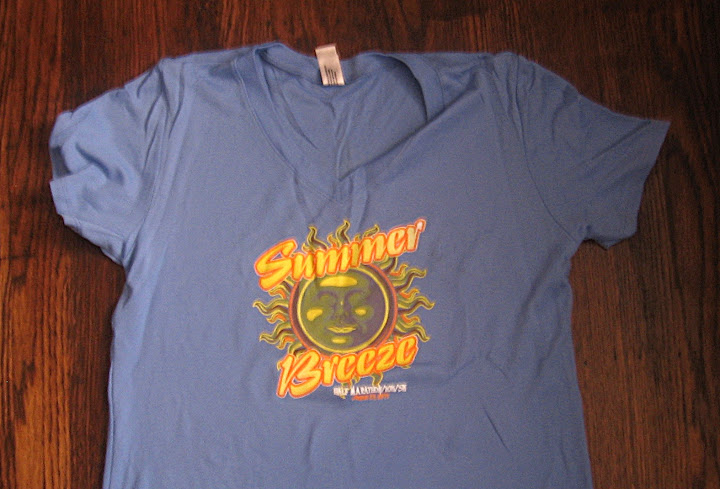 As with all Brazen events (as far as I know), a cotton T-shirt is included in the registration price. For $6, you can upgrade to a very nice technical shirt, or go shirtless for $5 off your fee. I ordered a women's medium tech shirt this time, which fit perfectly! I shall do this from now on any time I run a Brazen event. They will do exchanges for you if they have an extra in the size you want on a first-come, first-served basis.

All finishers received a large, hefty medal for their pains; equally hefty medals are awarded three deep in each age / gender group in five year increments, plus Fleet Feet gift certificates to the overall male & female winners for each distance. Finally, there was the small plastic bag with a few fliers, coupons, & samples as per usual. 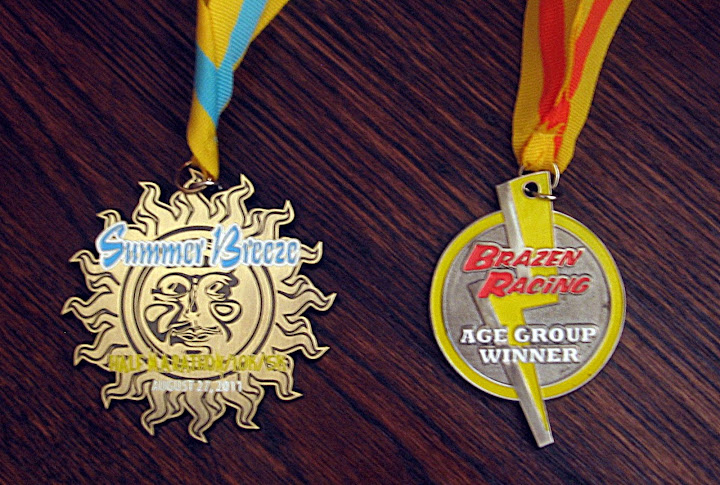 Like I said, I was particularly excited about this race going into it because, although it's the 4th 10K I've run this summer, both the Pride Run and Bad Bass had not-insignificant hills in places, and running another flat course would give me something objective to compare to Santa Cruz (also basically flat), now that I've had four additional months of training under my belt.

A word about Santa Cruz, though -- that was the first 10K I had run in over 10 years, and my time was 44:24. However, according to my Garmin, that course was also 6 miles even, not 6.2, so although it's my "official" 10K PR, the fact is that I was averaging 7:24 / mile, not 7:09 / mile as the results page stated. So you can see why I was excited about running 45:56 at Pride Run a couple of months later -- at that race I ran 7:19 / mile, a full five seconds per mile faster, on a course with two brutal hills. Since Summer Breeze was a flat course and I'd had two more months of training, I was pretty sure I could beat my Pride Run pace without a problem; I just wasn't sure by how much.

In the first mile, I concentrated on not going out too fast and finding a comfortable pace to settle into. My first split was 7:13, which startled me a little because I really didn't want to overshoot and end up dragging myself to the finish. I finished the second mile in 7:18, which made me feel a lot safer. On the other hand, I started thinking to myself, Wow, this really feels way too easy. My heart rate monitor seemed to corroborate that; generally I've been able to average right around 200 bpm in a 10K, and at this point it wasn't even up to 190.

Thus began an argument in my head between the part of me that really thought I could safely be running faster, and the part of me that was terrified of not having enough left to run hard at the end. You're already beating your fastest-ever 10K pace and it's only mile 2, I kept reminding myself. Just keep it here for a while and see what happens. 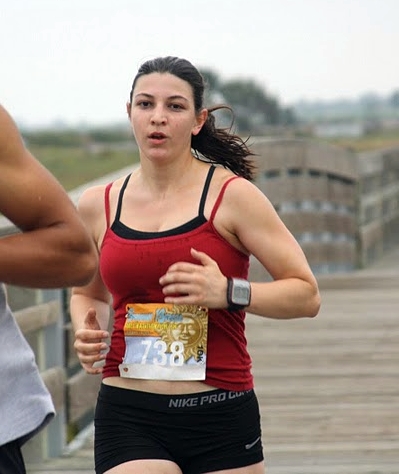 Still, I couldn't shake how good I felt at this pace. It felt like a tempo run, not a 10K race.

Finally, a little ways into mile 3, I started allowing myself to entertain the notion that these last two months might have gotten me into considerably better shape than I'd realized. I made a deal with myself that if I still felt like this pace was too easy at the halfway point, then I'd let myself push it a little more in mile 4.

I spent mile three slowly reeling in one of the only women in front of me that I could see. She'd run a good fifty yards ahead of me for the first two and a half miles; at about 2.7 I pulled even with her and could hear her breathing hard, much too hard for less than halfway through. I ran mile three in 7:19 and continued pacing her to the turnaround. After that she was done; I pulled away from her and never saw her again.One of the advantages of running the same distance several times within a short period of time is that you start to become an expert at how you should feel physically at different points in the race, and it gets easier to tell from your body whether you're right on track, taking it too easy, in trouble, etc. After the turnaround, with my heart rate still barely breaking 190, I kind of went, "Okay, this is ridiculous. I am not suffering NEARLY as much as I should be at this point." So I started to push more and let my heart rate come up to about 200. I decided I'd say there until we had about a mile and a half to go, and at that point I would run as hard as I wanted.

At mile 4 I spotted another woman twenty yards or so ahead of me starting to fade and went after her; at 4.5 I passed her along with a few men. The first/last water station was right at about 4.7, and as soon as I passed it I started pushing hard for the finish. Yep; I was thinking, definitely shouldn't feel this comfortable with only 1.5 miles to go. That's when I knew for sure that I'd run the early miles far too conservatively, just because I wasn't sure what kind of shape I was in and what I'd be able to hold. I could've run miles 2 & 3 each at least five seconds faster and been perfectly fine.

Although I really am quite happy with my race and my time, I'm kicking myself a little (in an half-amused, good-natured way -- honest) for not trusting my intuition and heart rate more in the early miles (ironic, given my recent posts on that subejct...). I ended up averaging 195 when I really should have been closer to 200. I doubt I had it in me to catch the 1st or 2nd place women (42:34 and 43:34 respectively), but I have a feeling that if I'd suffered just a touch more, I may have been able to beat my Santa Cruz time, or at least come close, and this time on a legitimate course.

Here's the really exciting news, though. According to the Runner's World pace prediction calculator (which I love, BTW), running a comfortable 44:42 10K should translate to a comfortable 1:38 half marathon. As much as the 10K has grown on me over the last few months, and as tempting as it is to keep working on that distance and chasing new PRs, the whole point of spending this summer on 10Ks was to get in really good shape for half mary training in the fall. Getting back under 100 minutes at that distance has been my fondest goal for a while now, and I think I'm finally ready to do it. Given all that, I've decided that instead of continuing to work on the 10K and running Race to the End of Summer 10K in September, leaving only seven weeks until Clarksburg, it really makes more sense to get back to half training right away and give myself the full eleven weeks. So yeah; Summer Breeze was very likely my last 10K this year. (And hey, nothing wrong with going out on a win!)

I have to say, I've been pretty impressed with the Brazen races. Both were lots of fun and well-organized, and I really enjoy the lower-key feel. I'll definitely keep this race in mind the next time I want to shoot for a fast time in the 5K, 10K, or half. :)

Posted by Angela Knotts at 1:54 PM