I swear I blinked and this race/entire race experience was over. How the heck did that happen?? I can't even give you like a mile-by-mile account because it was over so fast and I barely remember the details.

As I said in previous posts, I like to run a half all-out 5-6 weeks before a marathon to get a sense of my fitness. So I wanted a race with a nice solid course (not necessarily flat but nothing crazy), high probability of good weather, well-organized, not too big or too small, and reasonably close to home. (At 2-2.5 hours depending on traffic, Folsom is probably right on the edge in terms of what I'm willing to drive to for a non-goal race.) Not breaking the bank ranked pretty high as well.

I'd heard a lot of good things about Lake Natoma Four Bridges Half, but lo & behold, when I looked into it, that event had been taken over and re-routed by Sacramento Running Association and rebranded with a Johnny Cash theme as the "Folsom Blues Breakout" Half & 5K. SRA is the group that runs CIM and a few other well known, well respected races in the Sacramento Area, and they have a reputation for doing solid events "for runners, by runners," so my interest was piqued right away by that. The date was a good fit in terms of building up to CIM, and after investigating the course (gently rolling but net downhill, paved & closed course, reasonably shaded) and seeing that I could get the early bird price of $45 if I registered before March (!), I was sold. 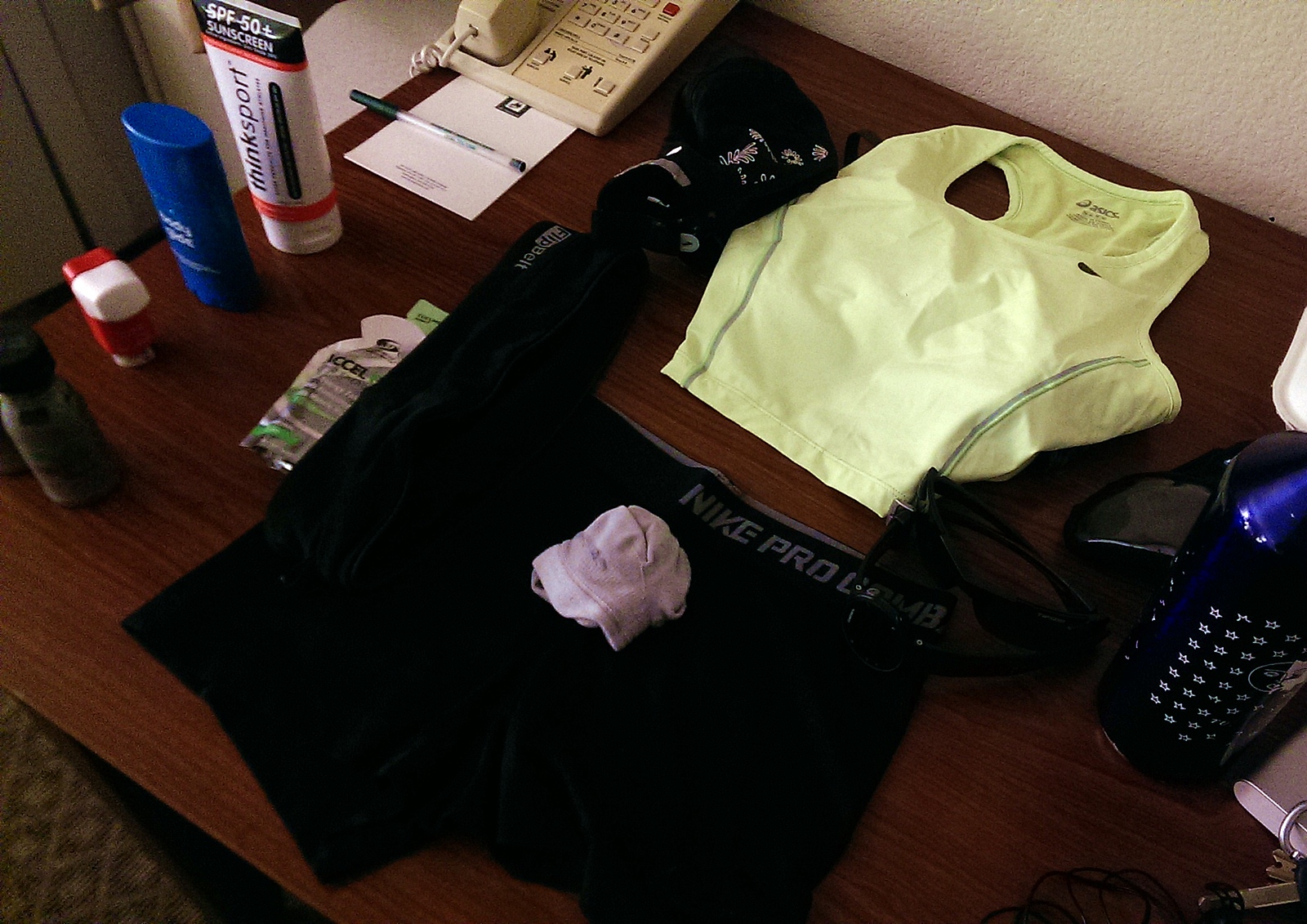 Bib lady ready to go (except for the bib)! If you run this race,
I highly recommend staying at the Lake Natoma Inn maybe 50 yards from the finish.

Unfortunately, race weekend ended up being a little crazy for me. After flying back from Texas on Monday, I felt like I'd never had a chance to really catch my breath. Several late nights and early-morning work calls meant I didn't get a ton of sleep. I spent most of the week feeling like I might be getting sick.

The Stanford game Saturday was scheduled for noon which meant I could actually go, but it also meant getting up early (again) to get ready for tailgating. We also stayed later than we should have, so by the time we got home and I got to Folsom, it was nearly 10 pm. After a desperate late-night dinner trip, I finally laid out my gear, double-checked the schedule for tomorrow, and hit the sack.

I was up at 5am & off to Dick's Sporting Goods two miles away to pick up my bib at 6am (thank you for having race morning pickup!!!!). They loaded the buses at about 6:30am and dropped us off at the start around 7am, where we were treated to a gorgeous sunrise & some spectacular views of the American River and Folsom Dam. 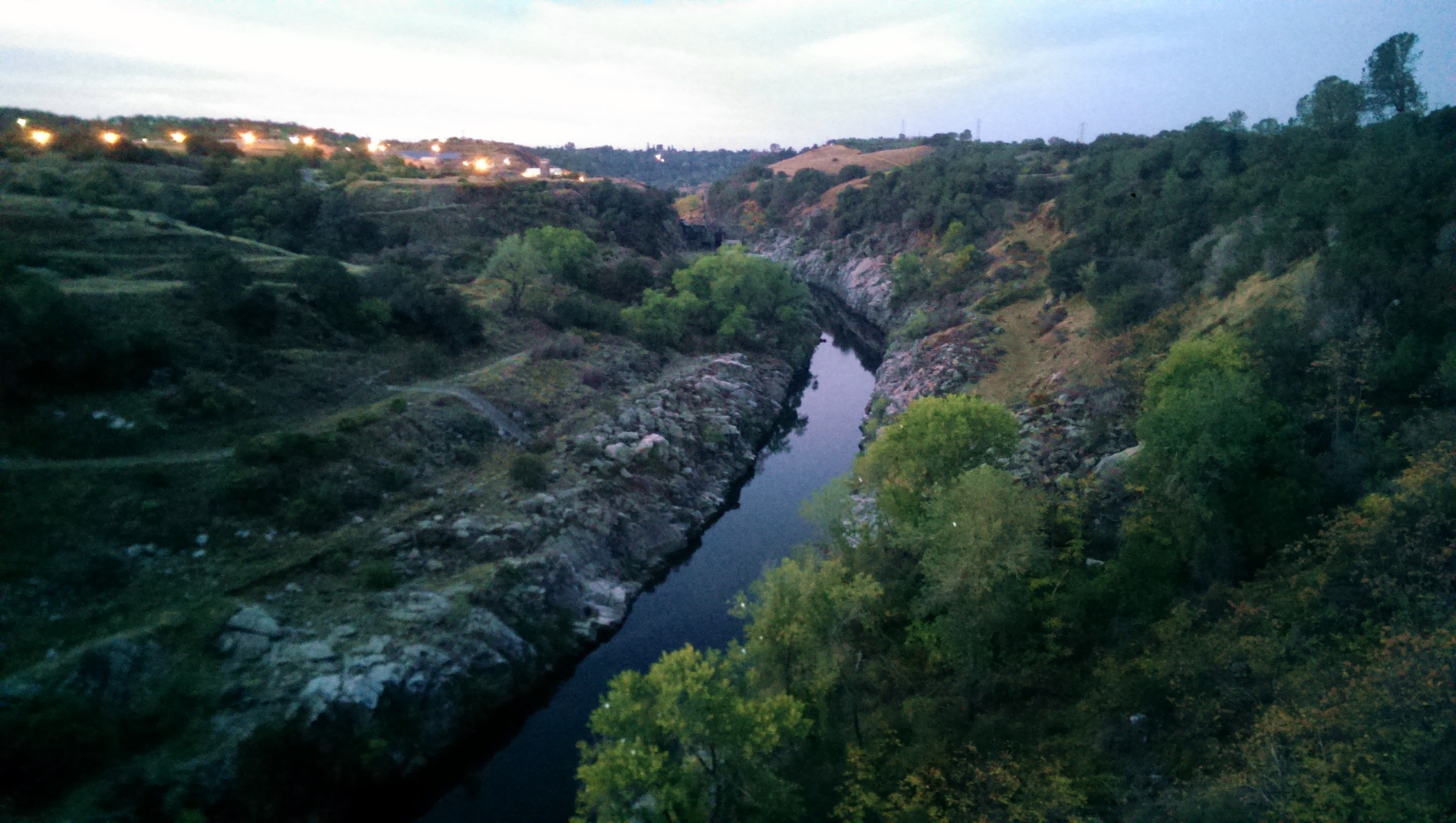 My plan was to run 1.9 easy miles before 7:20, hit the port-a-potties one last time, then jump in the corral. Unfortunately my race brain for some reason thought, "Eh, starting at 7:05 is good." But by the time I stripped down & dropped my bag it was 7:10, and as I started jogging back towards the course, I realized that the potty lines were looking reaaalllllly long. So I figured I better go ahead and jump in one of them. Long story short, people were taking a LONG ass time, the line was barely moving, and I was still several people back when they started herding people towards the corral at 7:20. I finally got my turn but I did NOT get any more time to warm-up, so rather than 1.9 miles, .3 had to do. Not ideal.

I wish I had more to say about the actual race, but it went by so quickly that most of it is a blur. I can tell you that the course was beautiful with lots of pretty fall foliage and a number of nice views of Lake Natoma, the American River, & the various bridges (at least three of which we ran over).

The weather was perfect, and the course as promised was closed, smooth, gently rolling for the most part. It wasn't at all crowded, nor was I ever out running alone (which I hate in races). The event itself was spectacular and I will absolutely drive 2-2.5 hours each way to run it again.

I can also tell you that I have never had such mixed feelings about a race performance in my life.

I really hate writing race reports that go, "Oh, it wasn't the time I wanted, but it was actually pretty good **under the circumstances**." That always feels to me a little too much like, "No really, I swear am way faster than that, and here are all the excuses for why I wasn't that fast today." Because real talk, nobody really cares what you can theoretically do under perfect circumstances, they care what you actually do on non-theoretical days that actually happen.

It also feels a little like settling ("I am fine with running a slower time than I think I'm capable of, because if not for x/y/z I am sure I could have and that's good enough"). That said, I was listening to something the other day about the difference between "settling" and finding a way to be satisfied with what is or has been. So, I'm not settling for 1:42. I still want to run another sub-1:40 and (gulp) maybe even one more PR before I run out of days where it's physically possible. But in the mean time, I'm trying to find a way to be satisfied on this day with running my fastest half in 3.5 years on trashed legs while trying not to die of hypoxia.

Deadlines/sellout factor: I don't think either distance fully sold out, but the deadline to register was 10/17. The incentive to sign up early is really all about the early-bird price; I signed up in February, so getting the half for a whopping $45 made me feel a little better about springing for gas & hotel.

There were special rates available for runners at several area hotels, as well as shuttle service to the start and back from the finish. I highly recommend staying at the Lake Natoma Inn directly in front of the finish line!

I don't think there was an expo per se, but there was packet pickup at Dick's Sporting Goods two miles from the finish in Folsom 3:00-6:00pm on Friday and 12:00-5:00pm on Saturday. I was VERY happy to learn that race morning packet pickup was also available at Dick's 6:00-6:30am, and parking/shuttle service to the start & back from the finish. This made everything super easy for me even though I didn't get into town until late Saturday night. (Also, there were donuts, bananas, and coffee at Dick's. I love it.)

The start was on Folsom Lake Crossing Bridge (aka the "Johnny Cash Bridge") over the American River, which has some spectacular views of both the river and Folsom Dam.

Buses dropped us off near the start, and one of them also served as the sweat check/gear drop and took everything back to the finish for pickup. (Gear drop mostly involved a folding table, a box of trash bags, and a bunch of sharpies, but for the size of this race that worked fine. Bags were organized in piles by bib number at the finish and I found mine easily just minutes after crossing the line.)

The port-a-potties were actually on the "race" side of the start line, which I didn't realize until it started getting close to to race time & the organizers started desperately trying to herd the runners out of the potty lines and to the other side of the starting line. The potty lines actually ran the whole width of the course, so they actually couldn't start the race until people cleared out. So, that whole setup seemed a little weird to me. (Though, it could be that they simply can't put them on the other side of the bridge. I don't know enough about how port-a-potties work. All I know is that the lines were concerningly long, and YOU try telling a runner s/he can't hit the potty one more time before running 13.1 miles.)

The finish was right in front of the Lake Natoma Inn, & was pretty well organized and easy to navigate as far as my experience went. The only slight issue I had was finding the bus back to Dick's Sporting Goods, but it was fine once I remembered that I'd seen them on a particular side street that morning.

Oh, you guys. This course was very nearly everything I want in a half marathon course. Smooth concrete roads. Closed course. Gently rolling, with nothing particularly steep or particularly long. A handful of aid stations serving something with calories in it. Not too many turns. Lovely fall foliage, with the occasional breathtaking view. Given the location and the date, it's a pretty darn good option if you're looking for a fast race.

Now, is it a time trial-fast course? Ehhhh probably not really. None of the hills are very big and it is slightly net downhill, but if it's your last chance for meeting some kind of high stakes time trial standard, there are a couple of *slightly* longer uphills that could ruin your day. (For example, the winding approach to the bridge in the Nimbus Dam area that crosses the American River, and that really demoralizing last .2-.4 right before the finish.)

Personally, though, I think I do a little better with some variation in terrain, so I would absolutely 100% consider it a good option if I thought I was ready to PR.

Logo tech shirt & finisher medal, plus post-race snacks & a free beer. (I don't know what the beer was because honestly the idea of alcohol after running hard for 1.5+ hours is nauseating to me.) 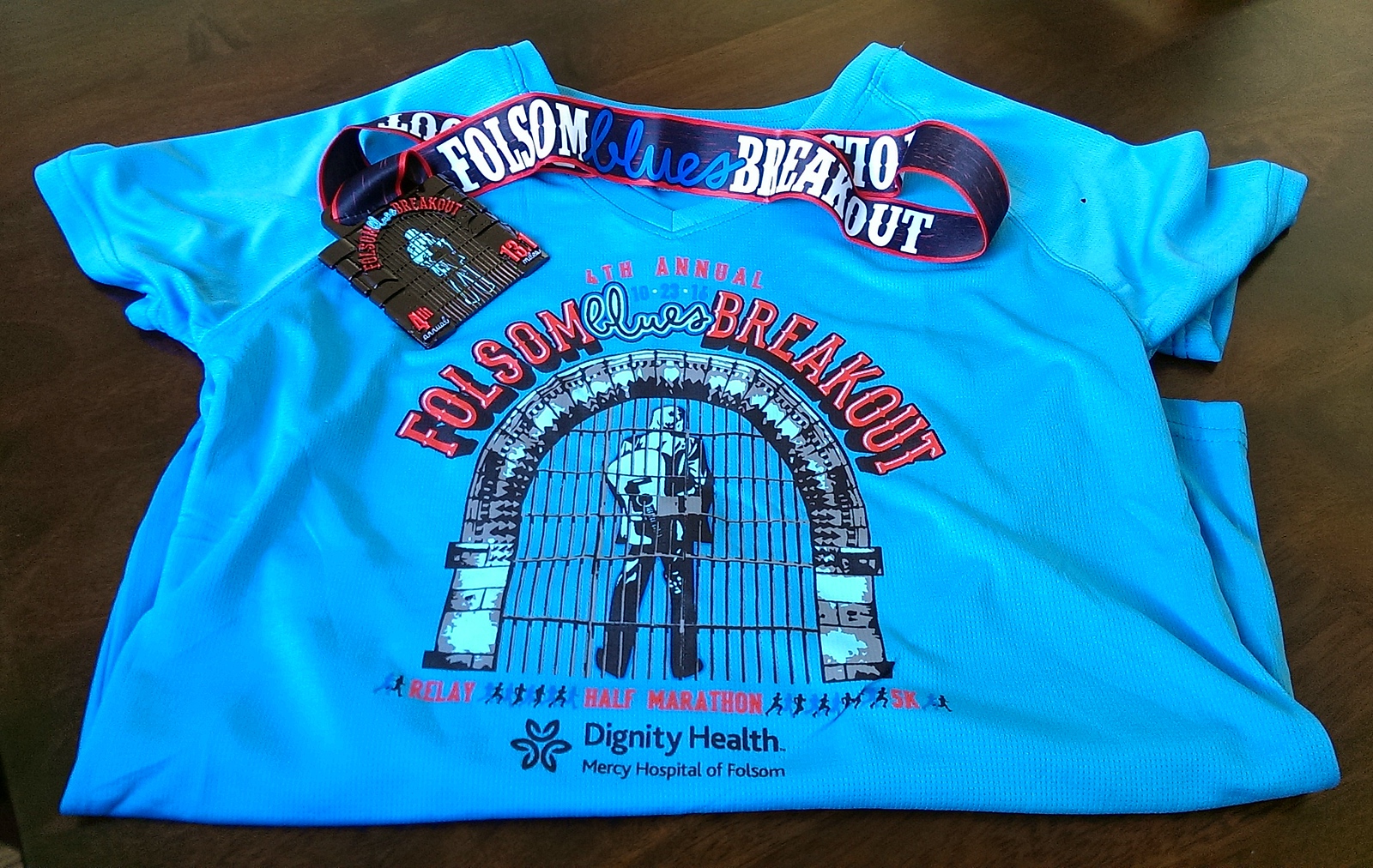 I LOVED this event so much. A great course, super well organized, and $45 to sign up early? Yes please! Sure, if pressed, I can come up with a couple of TINY, WEE little quibbles, but in terms of the things I actually care about when I really, truly want to run a fast race, FBB scores pretty highly. Yes, it is kind of a drive for a half, but I'm willing to do it occasionally for a great race where I'm looking for a fast time.

Email ThisBlogThis!Share to TwitterShare to FacebookShare to Pinterest
Labels: half marathon, race reports