This portion of the race report is the logistical parts & covers all the "nuts and bolts" information you might be interested in if you're thinking of running this race. If you want to read about how my race went, check out this post.

In a world of ever more absurd race fees, it really just does not get much more reasonable than that.

Deadlines/sellout factor: I know the half & full marathons did completely sell out, but not until a few weeks before the race. Not sure about the 5K.

A couple of other relevant things to know:

Field Size: On the small side. The marathon was advertised as being capped at 1,000, but there ended up being 1,250 finishers, and it looks like next year it will be 1,500. The half marathon had 1,206 finishers.

The Expo: I wouldn't say there was an expo so much as a packet pickup with a few sponsor tables. They had three different packet pickups on different days in different locations, rather than one huge ass expo the day before the race. This was a-okay by me. I don't need no stinkin' expo. (Also, it made it less crowded and MUCH faster to get your bib & shirt.) 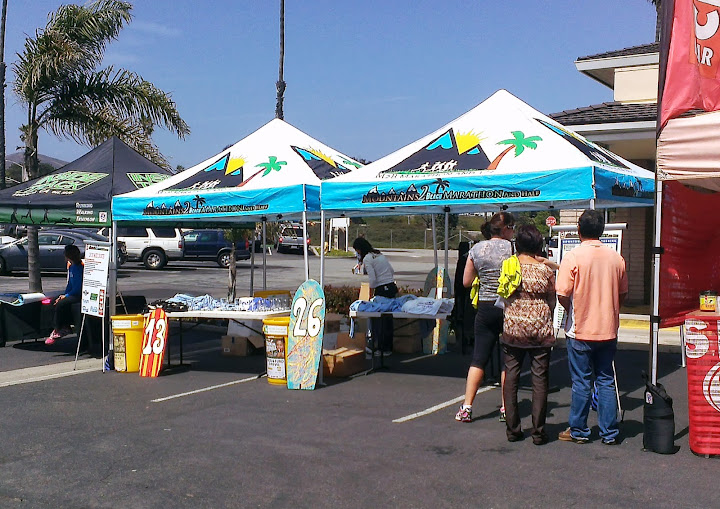 This is literally about a third of the packet pickup area.

The start of the marathon was at 6 am at Nordhoff High School in Ojai, which you get to either by having someone drive you or by riding on a school bus. (There seemed to be plenty of parking there from what I can tell.) The shuttles pick up in downtown Ventura, where there are several free public lots & it's actually not that hard to park somewhere, though some lots were closer to the buses than others. In theory the earlier you signed up, the later shuttle you could get on, but I didn't see anyone checking -- the volunteers basically just asked you whether you were half or full, & pointed you to the right set of buses. Even though I signed up early & so was supposed to take a 5am bus, I drove over early & sat in my car for an hour because I didn't want to waste my hip walking to the bus from far-away parking.

Now, I have heard a lot of stories about marathon shuttle drivers getting lost or not knowing where they were going, but this is the first time it's actually happened to me. Our driver took the freeway exit for the half marathon start instead of the full, there wasn't an easy way to immediately get back on the freeway, and it seemed like on top of this she maybe didn't know that area so well so she didn't know how to get back. The road was too narrow for a school bus to turn around on, so she just had to keep going until she got to the half marathon start where they had to move all the mats so she could drive through the start & get directions back to the freeway.

Was I slightly nervous? Maybe a little. We were one of the later shuttles, we'd left Ventura maybe 10 minutes late as it was, and the detour took us another good 20 minutes. But some of the other people on the bus were having full-on MELT DOWNS. Jesus Christ, you would've thought we were being hunted by terrorists. On top of this, the poor woman driving the bus didn't speak much English, and I couldn't believe how the melt-downers were treating her (yelling at her, mocking her with fake Spanish, mockingly repeating the one guy on the bus who legitimately spoke Spanish and knew where we were going and was actually being helpful). Seriously. I have never seen people behave so horribly at a race. When we got to the start at ~5:45ish & filed off the bus, the driver was crying. I felt so terrible for her and was sure to say thank you (and was glad to see that several other people did to).

Seriously. What the eff is wrong with people?

Can anyone guess the downside of "getting" to take a later shuttle? You guessed it!! Standing in a 200 yard long port-a-pot line!!

This was the longest potty line I have seen at a race by a factor of maybe 20. And actually it was two lines feeding into the same honey pot village, so a factor of 40 maybe. We are talking about a quarter of a mile of potty line. This was what actually made me nervous. I don't know whether this was a matter of not ordering enough or several buses arriving all at once or what, but that is something I would look into if I were the race director. I think there were like 6 people behind me when I finally made it to the front at ~6:05am. (Thankfully, the start was delayed.)

Bag check was super easy (BYO), and no line because every single other person racing besides the six people behind me still in the port-o-pots had already been there / done that.

I talked about this in more detail in a previous post, so I won't belabor it here, but just a quick-n-dirty recap of what you can learn from the website:

After running the race I would add that in the later miles there is not a lot of shade, and although it never got hot, it was warm & sunny enough that after running 18-20 miles, I got VERY thirsty. I mentioned in my previous post about how although the aid stations were more or less every mile towards the end of the race, it still didn't feel like enough.

Parts of it and rather scenic and of course the end is beautiful (if you're still aware of your surroundings at that point), but be prepared for a kind of industrial stretch in the 17-21 neighborhood. The downhill was barely detectable & not the kind that destroys your knees & quads & has you cursing halfway, but my quads were quite sore by 21 & I wished I'd done more training on sustained, gradual downhills just to give them a little extra endurance in that way.

And GAAAAAAH the out-and-back and the end. Jesus Christ. Why do races do this? It's morale death. Absolute & utter death. So be prepared, to the extent that you ever can be. I was really worried that because you get to the ocean at 21 the intuitive part of me would be going "Weeeee, almost done!" when in fact 21 is very far from done, and that is exactly what happened.

The finish line was by a big grassy area next to the Promenade where they set up tents for water, food, massages, bag check, beer garden, photos, results, etc etc. For the most part I think this was fine. I was so broken at that point that I didn't stay to take advantage of any of it, so I can't give you exhaustive details.

I do have two thoughts for the race director, though. 1) The finish chute area where all the water & Gatorade was got REALLY crowded by the time I finished at 3:36 -- I had to shove my way through throngs of people just to get to where the fluids were pretty aggressively, so I wonder if spreading this part out more might be a good idea. 2) All the fluids were in that one tiny area in the finish chute, which meant if, after you got your medal and enough fluids to not collapse & laid in the grass for a while & went to get your bag or a massage or whatever & got thirsty again, you had to fight your way back into the finish chute. So maybe a couple of smaller water tables in other key areas (say, at the bag check, the results table, & the massage area).

A logo tech tee & a medal made from recycled materials, which I think is kind of awesome. No bag of free samples to go through. No flyers that are going to get tossed at the first opportunity without a second glance. No fancy fleece / jacket / what have you to jack up your race fee by $40. 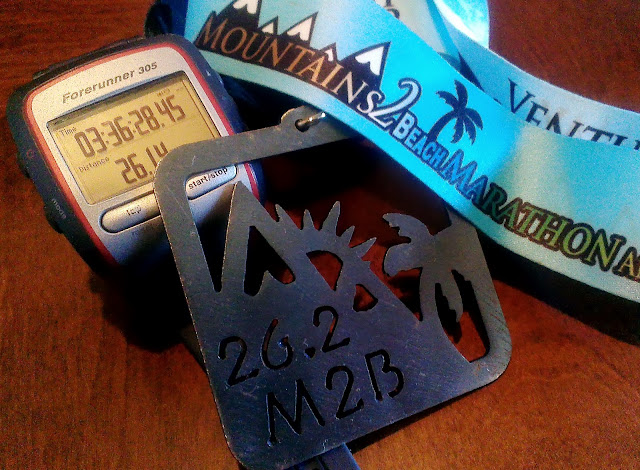 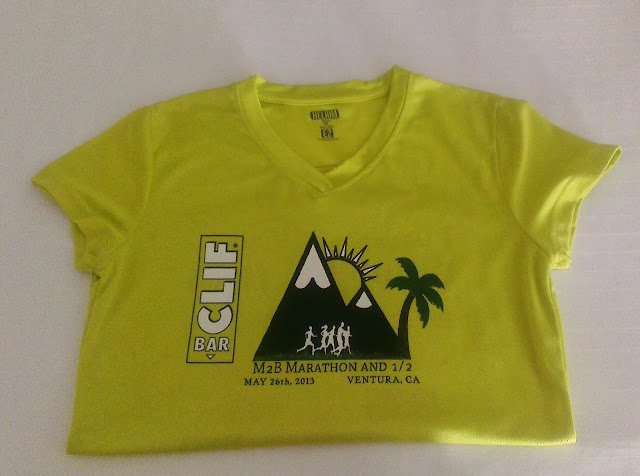 Sure, there may be a few things here & there would change, but by & large, I thought this was a great event.

I don't know about you but I am SO DAMN SICK & TIRED of race management organizations falling all over themselves to lure in the marathon-as-bucket-list-experience / running-as-amusement-park crowd with rock concerts & loyalty programs & fleeces & track jackets & super-dee-dooper-giant-glittery uber medals & wine tastings & VIP tents & health & wellness expos with keynote speakers and GOD DAMMIT CAN'T WE JUST FREAKING HAVE A RACE?!?!??

Because I don't give half a rat's ass about any of that, and I DEFINITELY am not interested in paying for it. So thank you, Mountains 2 Beach, for being a runners' race & not a dog-and-pony show. I will remember you the next time I am in the market for a spring destination marathon.