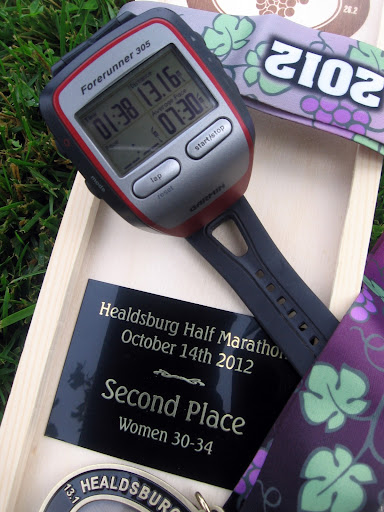 I have enough interesting stuff to say about this race that I'm just going to say it all up front. Scroll down for logistical details (cuz you know I've got you covered like that). ;)

You know those inspirational team sports movies that start out with the team sucking and with all manner of dysfunction, & then after some amount of wacky shenanigans & heartfelt bonding experiences & a rousing speech or two from the coach, they rally together & win the big game against all odds? This race was kind of like that, with all my different muscles & joints & things as the players & my brain as the coach. As of Saturday night, any number of my critical running parts still weren't talking to each other, and I was feeling pretty nervous about how things were going to go. I was scheduled to do a few shake out miles on Saturday morning, but what with the state things I didn't dare. I just packed up the car, did some easy stretching, & left.

I got to the expo around 4 & grabbed my stuff, which was a breeze. After that I killed some time at the 3rd Street Fleet Feet & talked shoes with Mark, then walked over to meet Cathryn & her family at LoCoco's for pasta. It was so great to finally meet her! They are all lovely & we had a wonderful meal & a little wine (um, hello, Run Wine Country), then headed back to our respective hotels for an early bed time. (Er....mine did not end up being so early. :P )

Given the tenuous nature of my lower extremities, I'd brought two pairs of shoes--my Newtons, which I prefer for racing, & my Brooks Adrenalines, which I wear for long runs & when my legs & feet are feeling weak & I don't trust them to get it done with less shoe than that. I figured I'd warm up in the Newtons & see how I felt, & if I still wasn't feeling comfortable I'd race in the Adrenalines. The next morning before I started jogging, I mentally gathered the troops & gave them a little pep talk.

"Alright, guys," I told them, "we've been working hard for the last few weeks. I know you can do this. I know you can run a strong race. I'm not asking for a PR, just a solid effort that doesn't leave me writhing in pain afterward." And then they all gave each other the awkward, painfully earnest look that dysfunctional teams give each other at that point in the narrative arc, put all all their hands in the middle, & yelled, "Goooooooo TEAM ANGELA!!!"

I would not say that warming up is a bellwether because I have had sucky warm-ups that preceded PRs & AG places. But I've never had a really good-feeling warm-up & then a disastrous race, so I took it as a good sign that I felt "in phase" as I jogged around the start area, with everything working together & cooperating the way it's supposed to.

Since I'm right in the middle of marathon training & wasn't really thinking of this one as an "A" race, I was never intending to go 110% all-out the way I did at Windsor Green in May, but I still wanted to push hard & race--say, maybe 90% effort. I've been running enough halfs lately that my body has started to learn what the right effort level is at different points in the race, so for the most part I wanted to just go by that & see what happened. If nothing else, it would give me an idea of roughly what kind of shape I was in & an updated benchmark I could use for the rest of my marathon training. The nice thing about this was that I really didn't feel any pressure to run a certain time or finish in a certain place--I just wanted to run a strong race & finish feeling good.

I'd left my phone in my car so didn't have a great way of finding Cathryn & Jen, but I'd seen Cathryn's bright orange top & figured I might spot it if I milled around long enough. A few minutes before the gun I headed towards the start & spotted both of them, & I was glad I got at least a little time to say hi & chat some before we were off. 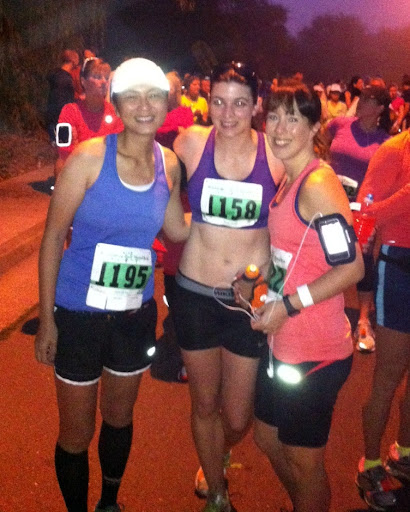 The rest of this race report has a theme and it is called THINGS THAT I HAVE LEARNED FROM RACING HALF MARATHONS:

Posted by Angela Knotts at 6:14 PM