I think I may actually be developing some skill at the 10K.

I'm not talking about speed, necessarily (though I have improved there); I'm more talking about strategy, and about the intuitive body sense of how hard you can run at a given point in the race that only comes with experience, through racing the same distance over and over again in a short amount of time.

If you do much racing in the Bay Area, particularly the East Bay, chances are you're familiar with Brazen Racing. Mainly their bag is trail races (and they do some amazing ones!), but they also host the occasional thinly-disguised good ol' fashioned road race. Last summer I ran their Bad Bass 10K at Lake Chabot (mostly runnable paved hills and one MONSTER dirt hill -- very much not an example of a thinly-disguised road race) as well as the extremely flat, fast, PR-friendly Summer Breeze 10K at the San Leandro Marina. The 10-second story is that I had a perfect day and a perfect race, and seven months of 10K-specific training culminated in a 44:42 PR finish, good enough for 1st in A/G & 2nd overall.

In February, they host basically the same race (same distances, courses, etc.) under the moniker Bay Breeze. The timing couldn't have been more perfect for a half marathon tune-up. The 2/18 race date fell almost exactly halfway between the beginning of the year (when I started running again after taking 4 weeks off) and the 3/25 Oakland Half, and having a strong time on the same course when I knew I was in really good 10K / half shape would make it easy to gauge my current fitness. 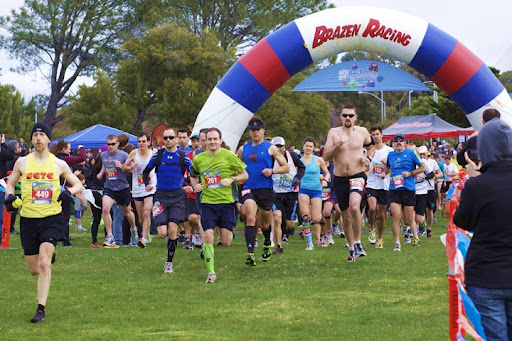 Deadline / Sellout Factor: Race day registration if space. Last year you could count on race day registration, but recently their events have started selling out ahead of time, especially the 5K/10K. I think this was the first one where everything sold out pre-race day.

Pretty much identical to Summer Breeze. Parking is free but limited, so get their early or car pool (highly encouraged). I arrived at 7:15 & had a 10 minute walk to the start.

As with the other Brazen races, you have the option of local pre-race packet pickup on Thursday and Friday or race morning pick up. As always, the pick-up & t-shirt tables were well-labeled, well-organized, and efficient, & free sweat check close to the start. This time there were boxes of sample bags sitting out for runners to take if they wanted instead of handing them out with the T-shirts, which seemed less wasteful to me. (I always feel bad that I end up recycling or throwing out over half the stuff, so I didn't take one. Plus I have enviro-guilt about plastic bags.)

Volunteer photographers are stationed along the course & upload their pics for runners to download for free (love), not to mention awesome, enthusiastic, & hard-working volunteers all around.

Summarizing from my Summer Breeze RR... 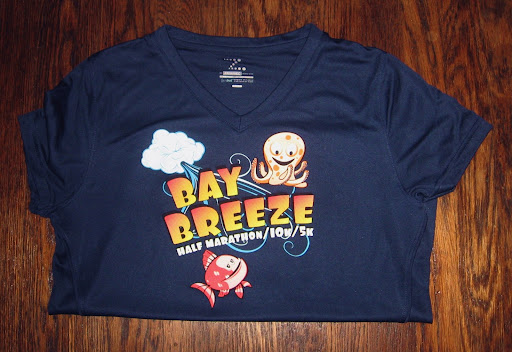 When I ran Summer Breeze in August, I had a reasonably good idea of what I'd be able to do based on the other three 10Ks I'd run that summer. This time was different, given that I've done a grand total of 7 weeks of any kind of running since sitting on the couch for 4 weeks post-CIM. I felt pretty certain that I could run sub-7:30s at the very least and fairly sure I wasn't up to my 7:12 PR pace from August, but within that range, I really had no idea.

My strategy at Summer Breeze had been to run 7:15-7:20 miles for the first half (a strong but slightly conservative pace for me at the time), then kill the second half with whatever I had left. I decided to go with the same general strategy this time, except aiming more for the 7:20 end of things for the first 5K. If I started off running 7:20s and was dying by the second or third mile, I could always dial it back; it was just a tune up, after all.

I lined up in the second or third row and watched maybe twenty women blow by me in the first hundred yards or so. I took a moment then to reflect on how there'd been a time when this would have bothered me and I would have charged recklessly after them, pace be damned. These days I've got a lot more experience and a lot more confidence; I'm completely comfortable now with running my race & letting everyone else run theirs. If I can catch them, it'll happen when it happens, and if I don't, then charging after them in the early miles wouldn't have helped anyway.

I did a little Garmin stalking in the first couple of miles, just to be sure that I wasn't going out too fast or falling into the trap of settling in behind or next to someone who appears to be going about the right pace for me but then imperceptibly begins to slow down.

This pace felt good. Yes, it took effort, but I also felt like I had plenty in reserve & could've run faster. I kept telling myself to stick to the plan, though, & keep it around 7:20 at least until the turnaround. Surprisingly, it was during miles two & three that I picked off the women who'd gone out too fast, plus the odd dude here & there; in the past, most of my passing has been spread more evenly across the middle half of the race.

"Third female!" a volunteer on a bike called to me, coming back the other way as I approached the turnaround.

It was then that something in my runner brain clicked on and everything else shut down. I stopped thinking. I stopped looking at my Garmin. Yes, the rational part can draw on data from tempo runs and speed workouts and analyze and calculate and make smart guestimations about just exactly how hard my body should be working at this point in a race, what my pace should be, what my heart rate should be, but for some reason at that moment my runner brain decided to step in and take over.

"Good work in the first half," it said to the analytical part. "You played it smart & got us this far in good shape. But I can take it from here."

The analytical part obliged, slipping amicably into the back seat as the runner brain took the wheel.

I could tell in mile 4 that I was speeding up, but not really by how much. But I also knew intuitively that whatever the numbers were, it was just the right pace for this point in the race given my current fitness. I reeled in a few more dudes. I ignored my Garmin. I kept speeding up; it hurt but I knew that the runner brain was in charge and trusted that it knew its business. Somehow it knew exactly how hard to push and when -- truly, I can't express in words how liberating it was not to have to think & worry about & watch pace at this point. I kept an eye out for either of the two women purportedly in front of me but couldn't see them anywhere.

In mile 6 I caught up with the gauntlet of 5K walkers, both out- and in-bound. I duked it out with a guy in blue. We traded the lead back and forth for maybe half a mile before the runner brain said enough of this and dropped him. With less than .7 left to go in the race she became exceedingly fed up with 5K walkers three and four abreast on both sides of the road. She may or may not have barked at a few and/or clipped some shoulders here & there; I can't say for sure because I wasn't running the show at that point. (Honestly, I don't feel too badly about it either way, though, since we were given clear instructions multiple times to run/walk single file unless passing due to the narrow-ness of the trail.) A volunteer at the last water stop called out "Third woman!" again. Having seen hide nor hair of them, I figured at that point that whoever those two ladies were, they were WAY out of my reach.

Once the finish was in sight it was tunnel vision. At this point, all conscious thought had ceased and I'm pretty sure it would have taken a physical barrier or debilitating injury to stop me. The rational, analytical brain was just holding on white-knuckled at this point, doing her best to keep breathing & not pass out.

"Hold on," the runner brain said to her. "Just a little farther now."

She nodded and clenched her jaw and covered her eyes.

When I crossed the mat I was a bit unsteady on my feet but managed to smile at the volunteer who draped a lovely cephalopod medal around my neck and told me "Good job!" I heard Sam announce me as the 4th 10K woman overall; apparently the other volunteers had missed someone.

It wasn't until I'd been stumbling around the finish area for a while that I realized I hadn't stopped my watch (I had to go back later & subtract to figure out my split for the last .2), so I didn't know my exact time until the official results were posted. I knew I'd run a solid race, though, and probably a fantastic one considering where I was training-wise. Still, it still blew me away to see 44:49 next to my name -- only 7 seconds off my Summer Breeze PR time. I'd have been happy if I'd managed to average a 7:20 pace; 7:13 was beyond my wildest expectations.

Not that I was even REMOTELY in this one for competition's sake -- I'd gone into it assuming I was nowhere near ready to put up a medal time -- but it was sort of gratifying to see that the three women ahead of me (40:56, 43:21, 44:01) were too far ahead to have worried about catching. (Also interestingly, at 47:00, the next female finisher was more than two full minutes behind me. Since I was never going to run faster than 44:01 or slower than 47:00, my place in the finishing order was basically pre-ordained.) And, bearing out my long-standing and well-supported belief that on average the fastest chicks are in their early thirties, two of those speedy chicks in front of me were indeed in my age group. 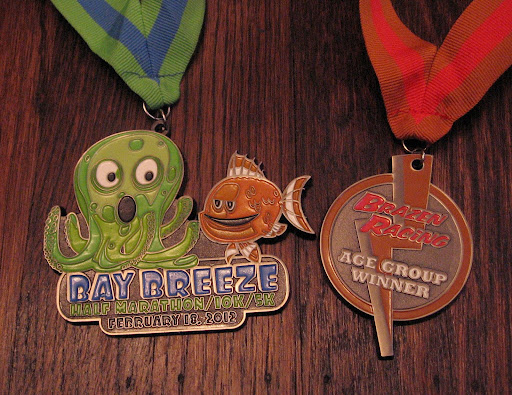 According to Coach McMillan, a 44:49 10K should give me a good shot at a 1:39:44 half marathon (plus the 5 weeks of training time I have left). It looks nice on a computer screen, but so far I have yet to translate a sub-45 10K into a sub-1:40 half marathon. It seems clear that I've got the speed, so in the next few weeks (months?) the real work will probably need to be around melding that with the strength necessary to make it 13.1 miles at a reasonably uncomfortable, just-barely-manageable pace. Yes, there's a lot left to do, but it is nice to know that I'm at least back in the right ball park. :)