Finally, on Friday afternoon I decided what the heck & pulled the trigger on a hotel room & a(nother) rental car. I was kind of shocked to see that I could still get a hotel room on a very reasonable number of points at the super nice Marriott right by the start & finish but hey, I'll take it. (Part of what makes this race so logistically nice is that it's right downtown so there are a billion hotels just blocks away from the staging area; if you live this far away you pretty much have to go down the day before since there's no race day bib pickup, but I won't complain because it also means you get to sleep in, relatively speaking.)

As I said on the internets, carb-bloating, amirite?

By the time I got back to my hotel in San Jose around 8:30, I was exhausted. I kept myself awake long enough to construct Flat Angela & make sure I had everything I needed for the morning (and also to make brunch arrangements with BT), but then I completely crashed. I didn't sleep well and woke up suddenly several times sure I had missed my alarm (in desperate need of water). I woke up feeling like poo and DEFINITELY not like I wanted to race a half marathon.

Water & food (& coffee) helped, as did being in the race atmosphere. For all that I have ambivalent feelings about Competitor group, this particular race is a good, solid, competitive runner-friendly one, and when everyone around you is warming up and doing dynamic streches and strides with serious looks on their faces, it makes you want to warm up and do dynamic stretches and strides as well. The upside about not feeling super invested in a race is the complete lack of pre-race nerves & anxiety; I couldn't bring myself to care too much about the outcome so I figured, hey, I'll just do the best I can & see what happens. That was my attitude last year as well, and it paid off.

Desperately trying to look like I want to do this

Like I said, I haven't been doing much HM pace specific work lately, so I was happy to see that I was able to get up to pace fairly easily and ~7:40 didn't feel too hard. This was the case for the first few miles, and then suddenly it wasn't. The course is very nearly pancake-flat but it does have a just-perceptible incline starting at mile 4; I don't know if it was that or the heat or the not sleeping well or just plain not having the fitness right now, but within the space of a mile I went from "Wow, this feels startlingly easy" to "Wow, I am giving it all I've got and my pace just keeps ticking up." One minute I was running 7:37 pace comfortably and the next I was running 7:42, then 7:43, 7:44, 7:45, in spite of constantly trying to pick it up. I just felt like I had no gas in the legs, like my quads and hamstrings had spontaneously turned into jello.

I think I probably could have kept giving it race effort and finished around 1:44-1:45, but I just had no interest in that. I only wanted to bury myself if it was going to get me in the 1:40-1:41 range, and since I knew that wasn't going to happen, I decided I'd rather just make it a solid pace workout & keep training for the 5K at the end of the month. The new plan was to push through to mile 6 at as close to 7:40 as I could manage, then take the rest of the race easy.

Which, I mostly did. I jogged comfortably from mile 7 on, walking the water stations, but admittedly picked it up a bit toward the end (because, end-of-race vibes) with a 7:50 mile. In the end I crossed the line in 1:51:30.

Yes, part of me is disappointed that for whatever reason I didn't have 13 miles worth of 1:40 pace in my legs that day, and part of me feels dumb going "What the heck, I'll go race" and then only racing for half of it. But given how my heart was never really in it to begin with and my real focus this fall has been the short fast stuff, I think it was an okay decision. Sometimes I start to question, "But was it really physical, or did you wimp out?," but I really do think that I've been doing this long enough that I can tell the difference. In miles 5-6ish I was really trying, really pushing, and just could not keep the pace up without ramping up into what felt like 5K/10K effort. Ah well.

So, yeah. Instead of a recovery week, it's back to training for the 5K, which I'm happy about. Looking forward to my first road 5K in three years at the end of the month!

Price: Competitor shows only the current price rather than the entire fee schedule and I was not diligent enough to track the various price increases, BUT I can tell you that last year I paid $79.99 + $11.99 transaction fee (!?!) in March, and the price had risen to $175 for last-minute expo registration. However, they were offering a 2018 re-run special the week after the race, which I took advantage of. (Did I do it again this year? You bet your sweet tush I did. RNRSJ, I can't quit you.)

Truthfully, the cost of Rock 'N Roll races makes me a bit ill. It is worth noting, though, that RNR now offers a kind of refund insurance that covers things like illness, injury, pregnancy, etc. that might foil your race for $8.99, and you can also defer for $45.

Deadlines/sellout factor: I feel like this race has sold out in the past, but as of the day before the race, there were still spots available if you signed up at the expo. (Online registration was closed on Friday, I think.)

They've changed their results interface this year which made it super time consuming to look these up, so here are last years' numbers:

This year's were probably not significantly different.

The start is at Santa Clara and Almaden, just a few blocks north-west of Cesar Chavez Plaza, and the finish is pretty much at Cesar Chavez Plaza, so I was excited that I was still able to get a room at the San Jose Marriott which is literally RIGHT by the finish & just a couple blocks from the start. (Thanks, rewards points!)

You might have to pay, but there is plenty of parking available near the start/finish, including several large garages and smaller municipal lots, and if you're super diligent, you might even be able to find free Sunday parking on the street. (I don't know San Jose super well so I couldn't tell you exactly, but I have it on good authority that it does exist.)

If you're staying at hotel near the start (and there are MANY to choose from), you're good; you'll just probably have to pay. (Eg, last year at the Four Points Sheraton, a couple blocks from the start, parking a car was $29.99/night; this year since I paid for my hotel with points I sprung for valet parking at the nice Marriott which was $39.99.)

This course is near pancake-flat, and actually has relatively few turns for an urban race. (Don't let the elevation graph fool you, look at the scale.)

Every time I've run this race there has been a pretty awesome crowd presence (see: urban races), plus there are the bands if you're into that. (I tolerate them because I like the rest of the race.)

Aid stations were sufficient, well organized, staffed by super with-it volunteers, and--be still my beating heart--pouring real actual sports drink with real actual calories in it. Lemon-lime Gatorade 4eva. I carry my own gels but the later stations were handing some out along with maybe shot blocks or something, not totally sure.

Not that I need more of them but I am happy to say that the tech T situation has much improved since 2010! Both last year's and this year's actually fit, and don't make me feel like I look like a can of Sprite if I wear them in public. 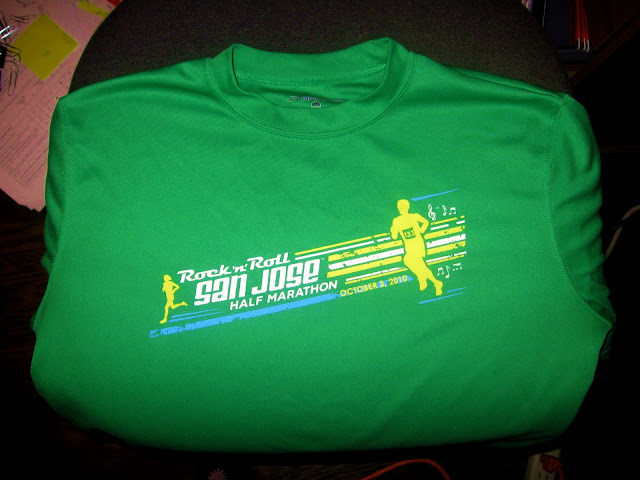 I must say I was a bit disappointed in the lack of goofy rock 'n roll theme elements in this year's medal. It seems we went Silicon Valley chic instead.

Can I just say THANK YOU to this & all the other races that still give out tastefully sized medals?
What is the deal with the crazy enormous medal trend lately??

If you are super speedy, it might be relevant to your interests that there are prizes for male and female overall winners 1st-3rd, plus 1st, 2nd, & 3rd male & female in five-year increments. At 6,000+ runners, including a fair number of elites and pros, though, they were definitely not relevant to mine! (I believe the men's race was won in 1:03:xx & the women's race in 1:12:xx hoooooly Jesus!)

You know, for all that I am not a fan of Competitor Group and some of the Rock 'N Roll races have gotten bad reports in the past, I have to admit that San Jose is a really great, really well-run and convenient race for me. There is a reason elites come to this race to OTQ (yes you can do it with a half) and that people also use it as a NYC qualifier regularly. All in all it's a pretty great Bay Area option if you're looking to run a fast race, and I can see why so many elites and other super speedy folks run it. No, it is not the cheapest race you could run, but I (once again) just took advantage of that $59 2019 re-run deal myself, which I think is pretty fair.

Posted by Angela Knotts at 3:25 PM