I was thinking about it the other day and realized that since I started running marathons in December 2011, there's been extremely little time when I haven't had one on the calendar *somewhere*. After CIM 2011, I waited maybe 6-8 months to sign up for CIM 2012. I signed up for Mountains 2 Beach 2013 before CIM 2012, and then after M2B I had a gap of about three months before I signed up for the 2014 Napa Valley Marathon (which I deferred a year because of a stress fracture). But other than those two gaps, at least as well as I can remember, I have always had a marathon somewhere on my race calendar, even if it was a nearly year and a half out.

It's pretty safe to say that I'm feeling satisfied on that front, for now; after so many marathons where something went wrong, I spent a long time feeling like I had unfinished business with the whole thing and just wanted one good, solid 26.2 where my training went well and I didn't get sick or injured and the weather cooperated. I feel like I finally got that at CIM 2016, but of course after that there was no question but that I was then going to run Boston (and Big Sur!) since I had the opportunity and might never get it again.

At this point, though, I'm feeling pretty good on that count & like I don't need to run another marathon again for a good long while. (Maybe when I age up next, in 2021, or in time to qualify for 2021 Boston in my new age group? We'll see.)

What I'm really itching to do now is get back to running fast stuff again. I may have run two marathons 13 days apart, but I haven't been able to finish a 5K without blowing out a calf muscle since December 2015, and gosh darnit, that needs to change. I want to run 5Ks and 10Ks in & around my backyard, maybe some cross country, maybe some track meets. 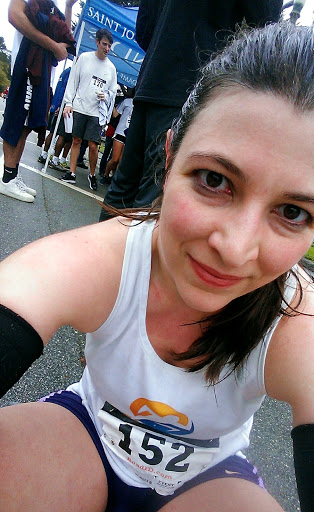 I've got RNR San Jose Half in October but that might be the longest race I run for a while. Right now the other thing I'm actually signed up for is Race to the End of Summer 10K, in San Jose on Sept. 2. Which, hey! Speaking of which! If you want to run a reasonably flat & fast 5K, 10K, or half on that day, you can take $7 off the registration price with code AK2018. That makes it $23 for the 5K, $28 for the 10K, and $48 for the half, tough to beat for a real, actual, proper road race these days.

I ran the 10K in both 2016 and 2017 and, though it can be warm depending on the day (hi, South Bay in late summer!), it's a solid course and a well organized event with cool swag for all distances. I'll be taking another crack at the 10K myself--come say hi!

No, I will never not post this picture when I talk about this race.

They always have cool medals at this race.

After RNR San Jose on October 7, I want to keep the momentum going with some other short, fast stuff. I have always wanted to dip my toe back into cross country, so once the schedule comes out we'll see if there's a race or two I might be able to jump into; there also tend to be all kinds of local holiday-themed 5Ks & 10Ks. The truth is that while I think all this marathon training for so long has helped me get really good at a certain kind of suffering, I feel like I've gotten out of practice with the kind where you just hurl yourself face-first into blinding white-hot agony for 5-10-15-20-40 minutes.

Local peeps, any favorite fall/winter short races you'd recommend? I'm hoping to get maybe one thing on the calendar in November & one more in December.

Posted by Angela Knotts at 8:42 AM