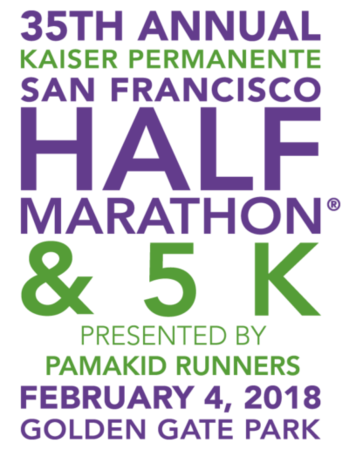 I'm probably doing all this in the wrong order, posting-wise, but oh well! You get a post! And a post is better than no post. Right? Let's go with that.

Kaiser Permanente Half is one of the iconic San Francisco races, right up there with SFM and Bay 2 Breakers. In fact, in spite of the fact that SFM and B2B are flashier & marketed way more heavily, I would probably still consider Kaiser Half my "hometown" race over either of those, for a few reasons.

1) There are a lot of fun, well-done races in San Francisco that offer their own unique experiences, but most of them also tend to be a bit of a spectacle and cater more to tourists and fun runners looking for an "event" or "experience" than local runners just looking for a good, fast race.

2) If you're hoping for a half PR, Kaiser is 100% your best bet in SF. The course is 90%+ flat or downhill, doesn't have too many turns, and takes place in early February where the biggest weather risk is heavy rain or wind (and a light breeze and/or drizzle is much more likely).

3) $$$. The first time I ran KP half, I think it cost less than $50. It was up to $60 when I registered at the early bird price in July (plus transaction fee, bah), but that's still over $100 less (!) than some other half marathons in the city that offer a different experience.

None of that is to say that the flashier, more spectacular races aren't worth running (and I have!) depending on your goals and interests; just that to me they tend to feel more like destination races than truly "San Francisco" races for San Francisco runners.

I ran Kaiser for the first time in 2010, my first distance race after a bit of a hiatus when I was working a lot and realized I'd gotten rather sedentary & my best pants no longer fit quite right. Did I train for it? Ehhhh sort of! But it was kind of what I had in me at the time.

I wouldn't say I ran a perfect race but it was also not awful, and at the time my 1:47:10 finish was a PR. I registered to run it again in 2014 but came down with a stress fracture in December 2013, womp womp. Ever since then I've been wanting to take another crack at it, but until this year the timing hasn't worked out. So I was pretty excited to line up in Golden Gate Park on Feb. 4 until (WOMP WOMP) I came down with a case of WTF hip dysfunction. >:-(

The short version is, a tiny niggly ache in my left hip suddenly exploded into a full-blown catastrophe during a hotel treadmill track workout on Jan. 23. I was only worried about it for about 24 hours, at which time I came down with the flu (!) in an airport (!) in a downpour. (Like. Seriously. WTF, universe.)

So having the flu for four days sucked a lot, but part of me kind of went, Hey! At least there's no pressure (read: possibility) of running, so maybe when I get done having the flu whatever this stupid hip thing is will be gone. Except that's not what happened, and 5 days before Kaiser I was unable to run even two easy miles without very serious, sharp, red-flag style pain. So my pie-in-the-sky plan was to not run at all until the race, and Hey! Maybe a miracle would occur!

Normally I wouldn't even have bothered, but the start is like 4 miles from my house and I had a bunch of friends running as well. In spite of the fact that I've only actually run the half once, I know this course better than any other I've ever run. It winds through Golden Gate Park, the Panhandle, and finishes on the Great Highway, where I've logged literally thousands of training (and race) miles since I've lived in San Francisco. So I figured that literally the worst thing that happens is I go, I start, I have to DNF, & then I get back home more quickly to prepare for the post-race brunch I was hosting.

The good news: Although I could barely walk Tuesday night, my hip slowly but surely did get better with complete rest, and as of Sunday morning it felt completely normal. I didn't feel completely stupid suiting up & making the 15 minute drive to the start. Logistics were super easy, and about 20 minutes before the HM start I found Jen & a couple of other friends by the port-a-potties. (There were a bunch, but the lines still struck me as really long and slow.)

We chatted for a bit, failed miserably at taking any selfies, then walked over to the start a few minutes before the 8:10 gun. It was a bit of a traffic jam working my way up to the ~7:30 area (there are pace signs but it's all self-seeded) because apparently a bunch of the 5K runners missed the 8:00am start & were frantically making their way to the mat, but since I didn't have much hope that I'd be able to run more than a couple of miles, I was not too worried about this. (I didn't even warm up; that's how pessimistic I was.

The gun went off and within maybe 30 seconds I crossed the start & started running. The first mile was WAY way more congested than I remembered, with the people around me who should theoretically have been running about 7:30 pace running closer to 8:30. It was really too crowded to do much about it that early without weaving around people, so my first mile was a good bit slower (7:49) than I'd hoped (but again, I didn't expect to come anywhere close to finishing, so it was no big deal).

I was able to pick up the pace in mile two, going seriously downhill as we headed east through the Panhandle, & clocking a 7:36. At this point, I was really kind of stunned that I had no pain in my hip, but never expected it to last. Sure enough as I started mile 3 going back uphill through the Panhandle, I started to feel a little something, and it only ever got worse. Mile 3 ticked off at 7:48, but it was not long after that point that I made the decision to stop at mile 4, if I could even make it to that point. The pain was just getting worse and worse and I really did not want to risk any serious damage. So when my watch ticked off a 7:37 mile 4, I hit stop and stepped off the course.

Yes, it was a bummer, even moreso because I have been absolutely CRUSHING workouts and felt like I was actually in significantly better shape than when I ran Rock N Roll San Jose four months ago. But, it does make a huge difference when you've already been through the whirlwind of panic/anger/bargaining/depression and just accepted that this race was not going to happen this year. Honestly, given that I was in so much worse pain after only two miles at the track five days before, I was surprised that I made it as far as I did.

In any case, let's just say I had plenty of time to get back home & finish prepping for post-race brunch, which was still a bunch of fun, finish or not. 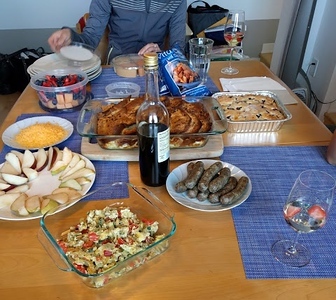 Price: If you register early (I registered in July), you can run this race for $60, and as per usual it climbs up from there. No, there aren't a bunch of bells and whistles, but if you want a well-run event on a solid, generally fast course in *probably* pretty good weather, it's the best value around. (Spoiler: I immediately signed up for the re-run deal. A woman needs redemption! Preferably close to her house.)

Deadlines/sellout factor: I don't think the half usually sells out, so there are *probably* still spots available if you want to squeak in at the last minute.

Somehow this race always manages to feel a lot smaller than it is!

The start is near the De Young Museum on JFK Drive in Golden Gate Park, and the finish is also on JFK Drive, just a bit into the Park from Ocean Beach. There is generally plenty of parking in and near the Park near both the start and finish, or up at Land's End. There are shuttle buses that ferry runners between the start and finish areas and the Land's End parking lot, so logistics are pretty easy as long as you give yourself enough time.

If you're coming from out of town....Man, I don't know what to tell you. It's not really that close to anything and/or get ready to spend $300/night because #sanfrancisco.

This course is pret-ty close to flat with very few turns, though it is helpful to know where the slight up- and downhills are. Mile 2 is a nice downhill where you can (responsibly) pick up a few seconds; in mile 3 you pay that same hill back so expect a slower split. A LOT of the first half of the race that winds through Golden Gate Park is a lovely, gentle downhill where you can really tear it up. The second half of the race is a god-awful out-and-back along the Great Highway along Ocean Beach, which sounds nice except HI, it's the second half, have fun running ~3 straight, flat, completely exposed monotonous miles to the turnaround and then ~3 straight, flat, completely exposed monotonous miles back to the finish. That section is not physically hard (unless it's hot, or there's a headwind, in which case, HARD!) but mentally it can be an absolute destroyer if you're not prepared for it. 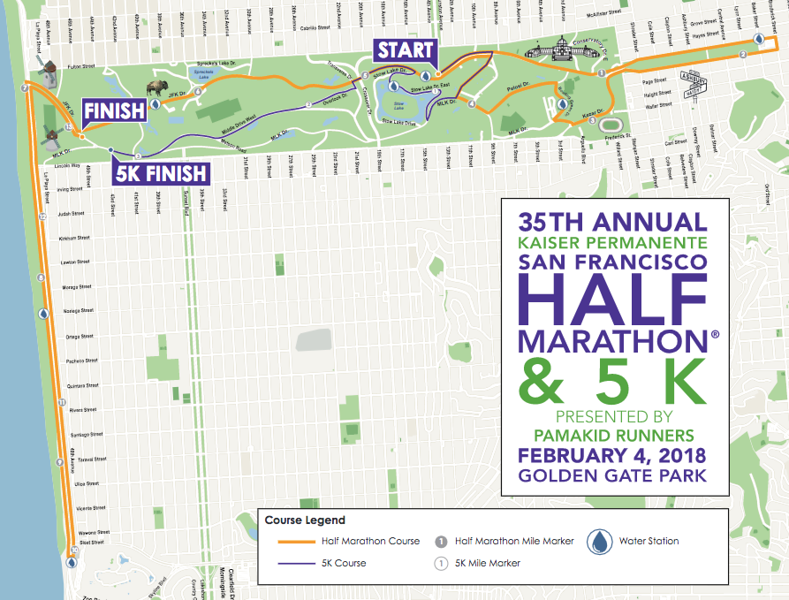 Aid stations are generally sufficient, well organized, staffed by super with-it volunteers, and--be still my beating heart--pouring real actual sports drink with real actual calories in it. Plus I also just find Golden Gate Park super lovely to run through. It is perhaps just a *bit* rolling, but mostly downhill on this course.

A pretty decent (if thin) long sleeve tech shirt, and they actually do a medal now, which they did not the last time I ran this race. (Perhaps that accounts for the $15 price jump....) 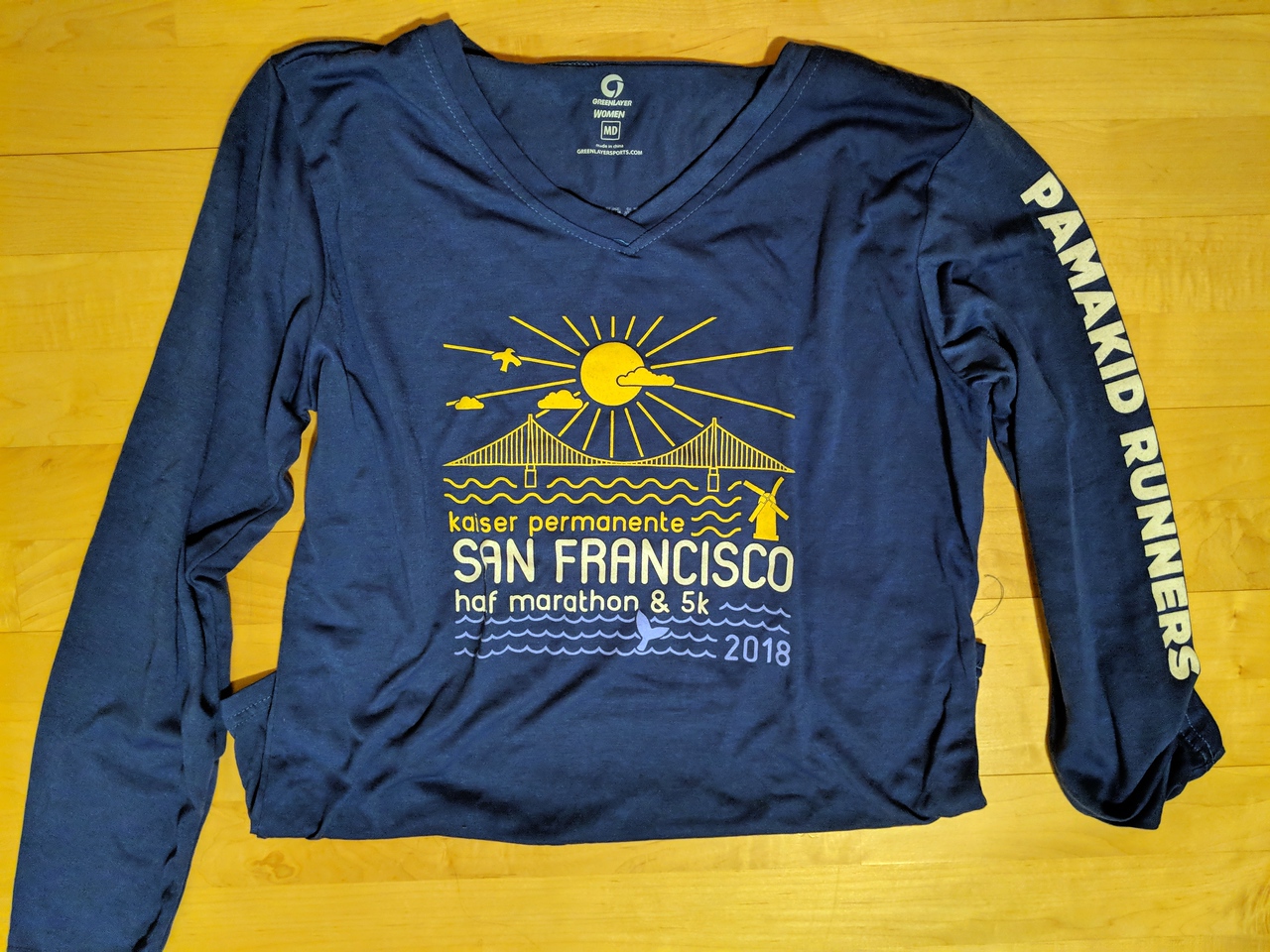 Photo credit for the medal goes to my lovely friend AF :-)

Yes, I've registered for the half three times and only managed to run and finish it once, but I still LOVE the course and that it's so cheap and close to my house. I'll probably keep registering for it forever, no matter how many times I get hurt & can't run it.