I signed up for this race back in September back when I was looking down the barrel of a dozen+ CIM long runs and already dying of boredom from running my same old routes over and over again. I'd run the inaugural Berkeley Half back in 2013 and been disappointed by the course (which spent about 8 miles dog-legging along freeway frontage roads), but since then it seems like they've been able to get the permits to create something more interesting & scenic where you actually get to see a bit of Berkeley. My schedule called for 17 miles with a fast finish and doing it on a race course seemed more appealing than doing it on my own with pedestrians and traffic lights to contend with, and since BHM was close to home and not stupid expensive, I figured what the heck. 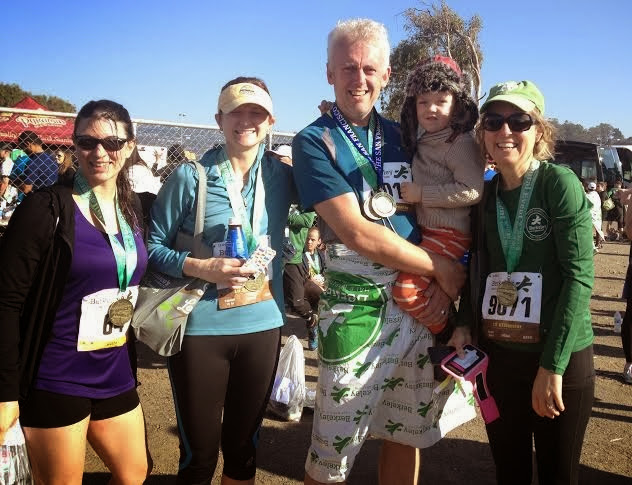 Inaugural Berkeley Half 2013 with IronHubs, the Dude, & friends of Cat. 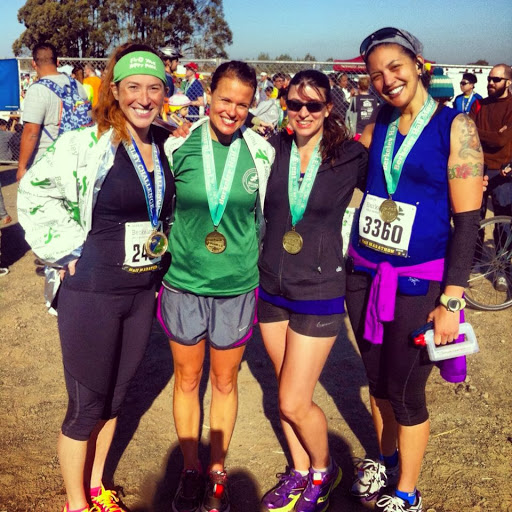 I got to Berkeley around 6:30 & easily found street parking two blocks from the start. (Our wave was starting at 8:12.) The forecast called for rain all morning, and though there were definitely plenty of ominous clouds, there was no sign yet of rain. I walked over to the staging area to find the port-a-potties, then started my 4 easy pre-race miles around 7.

Pretty sure I was the first one here.

Those first miles felt so awful. Like I almost think if I hadn't paid to run a race I would have scratched it. My feet and legs felt sore and heavy and "easy" effort was getting me like 10:30-11:00 pace. I just felt completely awful, and when my watch ticked off mile #1 I kind of wanted to cry at the thought of running 16 more.

I felt *slightly* better after three more miles, then headed to the bag drop in the Berkeley High School to meet Jen & get my bib from her. We made our way to the corrals and found our wave and also Jen's friend K (who is also running CIM). We were all running pretty much the same pace and I was happy for the distraction.

Around mile 4, maybe, it started to drizzle, which was actually nice and refreshing. It was cool but not cold and not at all windy. In the second half of the race the rain picked up at bit and by mile 10 it was full-on raining. (Coming back across the University bridge from the out-and-back section at that point, we past a lot of walkers at maybe mile 6 just headed out, and as the rain intensified I thought that if I were facing the prospect of walking 6-7 more miles in this, I would have probably quit.)

I now present for your enjoyment a collection of facial expressions from the Berkeley Half:

And the pièce de résistance (courtesy of Kimra):

Mile markers matched my watch exactly until mile 10, which appeared when my watch read 9.86. Every mile marker after that showed up at exactly x.86 by my watch, and I got 13 exactly at the finish, which seemed in line with what most other folks got. Given the accuracy of the later mile markers, I kind of wondered if maybe we went through a GPS dead patch in that two-mile out-and-back section & lost .14 miles somewhere. Then again I don't think the course is certified, so it could also have just legitimately been short.

Something else strange happened in that section. We started the out-and-back in the north lane, with folks running back in the south lane, but the mile 8 marker was in the south lane and the mile 10 marker on our side (facing the other way). Then suddenly out of nowhere we found ourselves running straight at people heading back in our lane! People were suddenly frantically trying to switch sides so that outbound runners (us) were now in the south lane and those returning were in the north lane. Weird, but we just went with it. After the turnaround, we ran in the north lane for a good bit, and all our mile markers were on the correct side, but then were directed by course marshals in a smart cart to cross over to the south lane. Now our mile markers were on the wrong side of the road.

Not long after that, we heard someone screaming behind us, "LOOK OUT LOOK OUT!!" It turned out to be probably the 10K leader, running, I dunno, 5:30-6:00 pace & desperately trying to weave his way through our crowd running 9:00-10:00 pace. More super fast 10K runners followed him. We tried our best to stay out of their way, but it was still a mess for the faster 10K runners. I still don't know what happened with the course during that section but it was a mess.

I was never running even remotely hard in this race but even so, by mile 10-11 I was *SO* over it and ready to be done. On the plus side, once we finished and I wasn't running anymore, I actually felt fine almost right away and was fine for the rest of the day, so I suppose that's the combination of peak cumulative fatigue along with being in pretty much peak shape endurance-wise. I felt horrible, but I felt horrible from the first step and it never got any worse than that.

You can't tell but all three of us leapt into the air at the finish. Apparently I was the only one the photographer caught. #lame

Deadlines/sellout factor: This year all three races sold out. I think the 10K went first and the other distances sold out closer to race day. (Weirdly, there was a "Race Registration" tent in the staging area. I'm not sure what that was about. Maybe early registration for next year?)

It looks like the website now has only the most recent price ($110), and I don't remember what it was when I signed up or how many times it increased. Fail. It might have been like $80 in September & I think I had a discount code. If you decide to run this race, I recommend poking around the internet for Groupons, race ambassador promo codes, and other discounts.

The expo/bib pickup was Friday and Saturday at Berkeley Sports Basement. There is no race day bib pickup, but you can have a friend pick up for you. (Since she lives closer, Jen volunteered to pick up my bib for me. THANK YOU JEN!!!)

Race Start was on Milvia St. at Kittredge St., & the finish was just a block or two away, on Milvia at Allston.

Bag check was in the Berkeley High School gym right by the start, and when the rain showed up it was REALLY nice to have an indoor area available after the race!

As mentioned above, there were plenty of port-a-potties. I also appreciated all the picnic table seating (though due to weather there wasn't much use for it). Often after races I find myself lamenting the lack of available seating areas that are not on the ground.

The course was a big loop with lots of turns, a few steep-ish hills, and one nasty two-mile out-and-back section along the Bay. This year's course was MUCH nicer than the first year I ran it, meandering through various parts of Berkeley. I've been told that in the second and third years the course actually wound through parts of the UC Berkeley campus, but no such luck this year. Some of the roads were fine but a not insignificant portion of them were chewed up and riddled with potholes. (Between this and the rain, I decided to wear trail shoes.)

Aid stations were every couple of miles with water and Nuun, which makes the second time I've run this race without any useful sports drink out on the course. Nuun is electrolytes; it contains no calories. This makes it next to useless in terms of distance running. One of the aid stations had chews and a few had granola bars of some kind, so there was that. But still. I don't understand why so many races seem to be switching away from calorie-rich sports drink to low- or no-calorie drinks. It makes zero sense to me.

Like I said above, pretty much everyone I know clocked a short course, starting at the mile 10 marker. The course isn't certified, I believe, so it's hard to say whether this was a GPS issue or a legitimately short course. Also there was definitely some sort of issue in that out-and-back section that will need to be sorted out, as well as the issue of the fastest 10K runners getting stuck behind thick crowds of half-marathon mid-packers. Either something went very very wrong with the 10K or someone just didn't think the whole situation through.

This race was fine, I guess, but I didn't love it. The course is okay but not particularly fast or scenic, and there is some question in my mind as to whether it might be short. (Though, I think the course has been different every year, so who knows what future years will bring.) It's not stupidly expensive, but not particularly cheap either (~$80-110, I think, maybe a little less with a discount), so the only real reason I can come up for running this particular race is that it's nearby and the date most likely means cooler weather (though you could also get a downpour as we did). Due to all the turns, the few hills, the uncertainty about the distance, and the funkiness with the course in the out-and-back section, I don't think I'd recommend this race for a PR/time trial course.

Posted by Angela Knotts at 5:10 PM