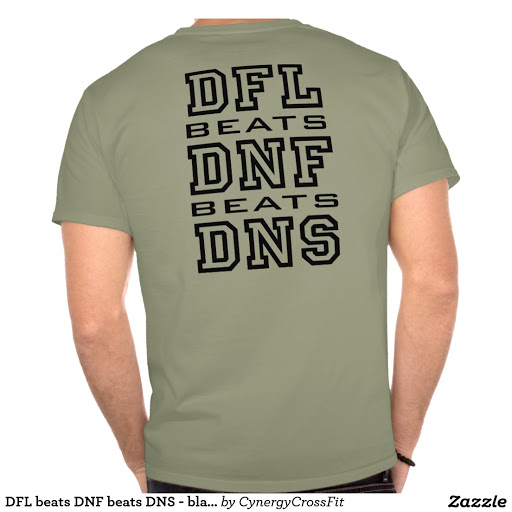 I don't know about you but this one is up there with "Pain is
temporary, pride is forever" on my eye-roll-o-meter.

As with all the pithy motivational memes, I understand the point people are trying to make. We're trying to remind people that finishing is an accomplishment, and you should be proud of it even if you're DFL, because lots of people DON'T finish. And, if it turns out you don't finish for some reason, then, hey, at least you put in the effort to start and give it a try, because the vast majority of people don't.

I get that. I do. But can we also agree that there are many, many circumstances where it's just not true? Because *man* I am regretting running that half marathon last Saturday. I regret getting up at 4 a.m. on a Saturday. I regret losing the sleep. I regret spending five hours in my car & using 200 miles worth of gas.

Now, all of that would have been worth it if I'd been able to do what I'd planned (13 comfortable miles at marathon pace). But the weather didn't cooperate, and in a desperate attempt to get *something* out of it, I ended running a lot harder than I'd planned, and that's thrown a bit of a monkey wrench into my plans this week.

Having finished my 4 weeks of hill prep, I was supposed to start the 4 weeks of speed prep on Tuesday, but it turns out that I ran too hard on Saturday for that to really be an option. I've felt like poop all week and my always-questionable, injury-prone right leg has been nagging me non-stop. I got in two short, easy runs, but even that, I think, was probably too much. Also, I'm planning to run Bay to Breakers 12K & pace a friend to a sub-one-hour finish this next Sunday, and the fact that I'm still limping a little is making me kind of nervous about that. 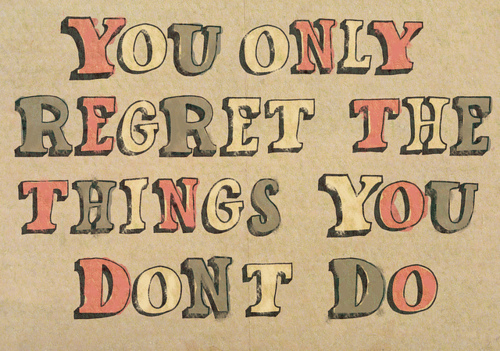 So yeah; in all honesty, I wish I hadn't even gone, and barring that, I wish in mile 3 once I realized how miserable things were going to be that I had just called it a day. It's not like just finishing a half is any sort of real accomplishment for me at this point, and I certainly didn't need another medal.

You know those internet campaigns where people tweet-o-gram or insta-face or whatever pictures or descriptions of them doing "uncool" or taboo things, like not wearing make-up or telling their salary history, and there's some sort of clever hash tag? Part of me kind of wants to do this for DNF-ing / DNS-ing races. BREAK THE SILENCE!! RAISE AWARENESS!! DESTROY THE STIGMA!! #yesallquitters #talkdnf

Because, really. There are good reasons to push through discomfort in races and keep going, but there are also many very good reasons to quit, and if I had a nickel for everyone I ever met or talked to who pushed through the pain and didn't quit and ended up injured or sacrificing a bunch of recovery time for lackluster results or just plain feeling blah about the experience and like it wasn't really worth it, I'd at least be able to, like, I dunno, buy some ice cream or something.

(On a related note, I ran across this post the other day. Clearly the author is my people. :) )

Originally scheduled for this day was an 8 mile progression run finishing in the 7:30 range, but I could tell as soon as I started running that nothing faster than ~9:30 miles was even remotely on the table. I felt completely worn out after two miles so decided not to push it any further.

Soooo thanks to some hideous Bay Area traffic and an attempt at running some errands on the way home to save time, it took me 3 hours to get home from work. Don came home feeling sick & so decided not to go to class, and there was just. No. Way. I was getting back in a car during rush hour. So instead we went to get Indian food.

The original plan called for 8 miles with 12-15 x 1:00/1:00. I suspected I probably would not be up for the full 8 miles yet but hoped I'd at least be able to give some of the fartleks a shot. But, running still felt tough even at easy paces, and when I started having pain in my right hip/hamstring/adductor (the sketchy one), I knew it was a bad idea. I should have turned around at 2 miles but then decided I should "tough it out" one more mile (so really two), and regretted it as soon as I got home because I putting weight on my right leg was incredibly painful. I tried rolling it out some, but since rollers can't magically repair damaged tissue, that ship had pretty much sailed.

Friday: Rest. I hoped if I gave my leg a day to heal I could do a short run on Saturday & a long run as scheduled on Sunday.

Saturday: Rest. Still limping & wanted to see if one more day off would save the long run.

Sunday: Rest. It still hurt enough that I knew running on it for any amount of time would make it worse, and I actually think I made it worse by doing a lot of standing & not moving at a birthday party & then a concert.

At first I was thinking "Meh, last week will just end up being a recovery week, I'll start the speed stuff this week." But, I kind of don't want to push my leg too hard this week and also want to make sure I'm fresher than usual for Bay 2 Breakers, so I think I'll probably just take it easy this week & try to get in some solid, pain-free miles rather than get overly ambitious with the speed work.

The week wasn't all bad, though! We had a lovely dinner party with friends Saturday night (not running gave me time to clean my house), met another at our local Beer Garden for birthday drinks Sunday afternoon, & then saw They Might Be Giants at the Fillmore on Sunday! 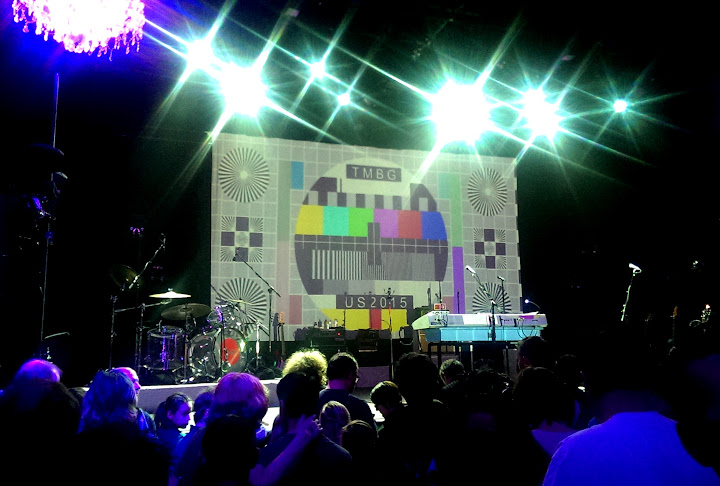 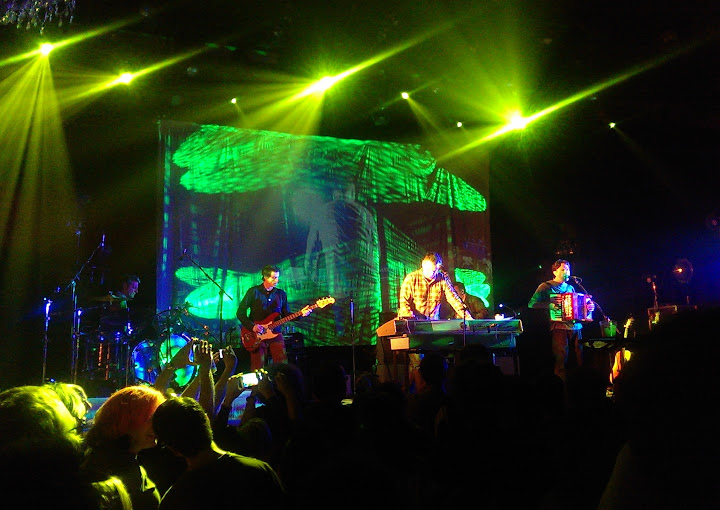 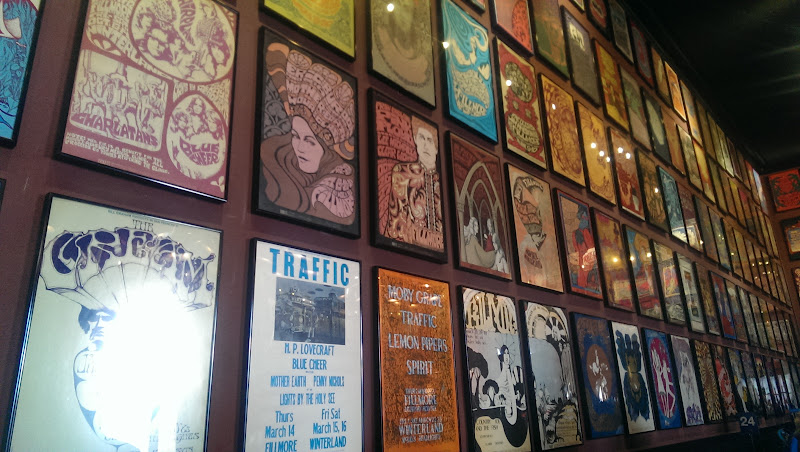 Every sold out show in The Fillmore's nearly 100 year history has its own poster hanging on the walls, and they give out the posters for free after the show. 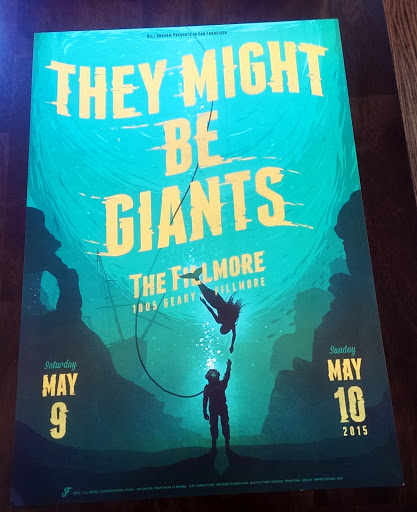 Posted by Angela Knotts at 3:32 PM