You Guys, I Ran Some Double Digits. \o/

On Sunday I ran my first double digits since tearing my hip flexor at M2BM in May. 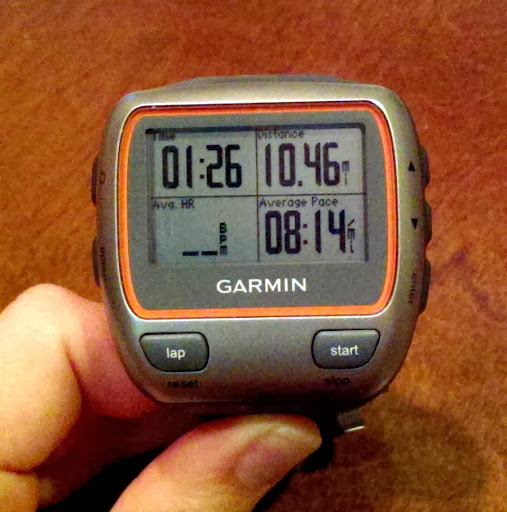 Not only is this a post-injury distance record, but it also brings my total mileage for the week to 30 miles exactly, a post-injury mileage record by 8 miles. And it felt great.

Before this run, I'd just been writing about one of the great contradictions in running, which is that sometimes your "easy" pace gradually getting slower during a training cycle is a good thing because it's a result of actually running enough to keep your legs chronically tired, which is what builds endurance. In September & October, I did most of my "easy" runs at a pretty consistent ~8:10 pace (ie, ballpark marathon pace). Not because I was trying to run them that fast--I was just trying to stick to an easy, casual pace where I could maintain good form, and that's just the pace where that seemed to happen most of the time. Trying to maintain an 8:40 pace (which is what I'm theoretically *supposed* to be doing those easy runs at) felt like a shuffle, plus it was completely uncomfortable and made good form just about impossible.

But, as my leg got better and I started running more, the same nice, comfortable level of effort gradually slowed to 8:25-8:40ish, depending on the day. Since I was no longer running on fresh legs basically all the time, the pace that before had felt like an uncomfortable shuffle now felt just right.

Then today happened. Honestly, I felt pretty crappy and running ten miles was just about the last thing on the entire planet earth that I wanted to do. The only way I got myself out the door was by reminding myself that the only goal was to get the mileage in & gain the peace of mind of completing at least *one* double digit run before Berkeley Half next Sunday, so I could do it as slowly as I wanted as long as I finished.

I have a pretty bad habit of doing my long runs too fast because I hate them & just always want them done as quickly as possible, so this time I was pretty strict about focusing on my breathing & making sure I was never panting--breathe in for six steps, breathe out for six steps, wash/rinse/repeat. Every time I felt myself started to work a bit too hard, I made sure to dial it back & slow my breathing, particularly on the up-hills. ("Look, buddy, you get this much oxygen & that's it, so don't waste it.")

Which seemed to work. I felt better & more comfortable than I have been on my shorter runs, & if you'd asked me, I'd probably have guessed I was running around an 8:30 pace. But mile after mile I kept seeing low eight / sub-eight splits on my watch. It wasn't even like Let's Go 510 where my legs were just out of control & I couldn't slow them down; I really was running at what felt like a comfortable, casual pace.

I have no explanation for this, especially at the end of my highest mileage week in six months. But it does boost my confidence about Berkeley. Although I could definitely tell that this was farther than my legs had gone in a while, I still felt good the whole way, finished strong, & felt like I definitely could have gone 3 more miles at the same pace.

To be honest, I've been getting a bit nervous about NVM & starting what I think of as "real" marathon training, now that it's less than 4 months away; after this run, though, I feel like I let out a giant sigh of relief. For the first time since I registered for it, I'm actually feeling excited about running a marathon in 3.5 months, instead of just anxious & freaked out. I finally have some faith that all the pieces might fall into place.

a.m. 4 miles easy / p.m. karate + light strength. Normally Monday is my rest-from-running day, but since I was in Paso all weekend & didn't run at all, I was itchy to get at least a few miles in before class.

3.6 track. 1.5 warm up, 4 x (400m @ 5K pace / 1:30 jog). This was supposed to be *six* 400m's plus a 1.5 mile cool down, but when you suddenly realize something hella super lame has just happened to you, it turns out you suddenly become a lot less concerned about finishing your track workout. Also, if you ever want to feel *terrible*, I highly recommend running some hard 400m's & then standing around in 50° weather in your sweaty running clothes for an hour without a proper cool down or stretch. By the time we got home my legs felt like lead.

6 easy. This run started off feeling terrible (harder day at karate than usual), but by the end I felt surprisingly good & like I could have gone a few more miles & still felt great. It's been a while since I've felt like that, so yay. :)

When I got home my body still felt achey & tired & part of me was kinda-sorta trying to come up with any rational reason I could use to skip or postpone this run, or at the very least swap it with Saturday's. In those situations I find the best negotiation tactic is just to put on running clothes, go outside, & tell whatever part of me is being wimpy, "Look, it's okay if you can't do the whole thing, but you have to try." I figured I'd run 1.5 easy & at that point see whether I felt like trying to run 3 miles at a 7:30 pace seemed like a great idea or not. In the end I decided to try, and it worked out okay.

Because my house is kind of in a basin, my first three miles in any run are by & large uphill, so the first 1.5 tempo interval was hard, and I probably ran it harder than I should have effort-wise, since I clocked only a couple seconds slower than goal pace. But after that I was nice & warmed up, & the second interval (mostly downhill) was considerably faster (of course) but also just felt way easier, to the point where I kept glancing at my watch & having to slow myself down intentionally. Even though I know I'm not back to being able to *actually* run a half at that pace, at that point I felt like I could have gone a lot farther without feeling uncomfortable, so progress. 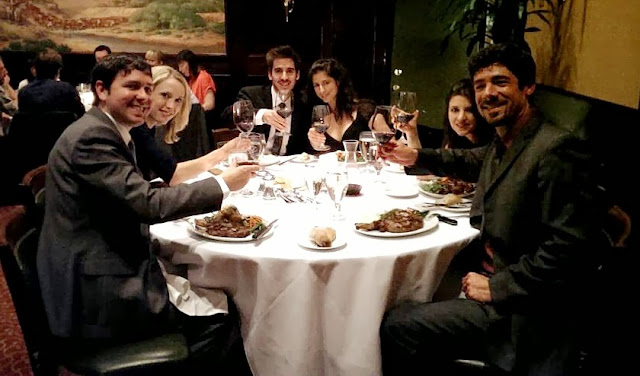 Our steakhouse tour of San Francisco continues. So far we'd hit Bourbon Steak, Boboquivari's, and House of Prime Rib; Saturday night's destination was Harris Steak on Van Ness, which OMG. If you're a steak eater in the Bay Area, GET AT IT.

I was technically supposed to run 5 miles on Saturday, but I wanted to do at least 10 on Sunday & didn't want to go over 30 for the week, so I decided to rest instead & just tack an extra .46 onto Sunday's run to make it a nice round 30.

Next week: I run a half marathon.

Posted by Angela Knotts at 6:00 AM