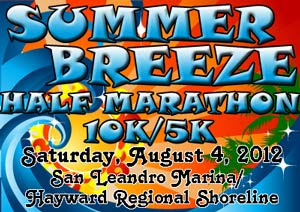 Phew! Thanks to vacation & post-vacation catch-up, this race report has been a long time coming. Since I know you've all been waiting for it on pins & needles, let's get to it!

Since I've run this race (basically) twice before, I'll refer you to those posts (Feb '12, Aug '11) for all the event details. The 10-second story is that Brazen is a great group that does fantastic small, high-value, low-key events & you should definitely check them out if you haven't.

Initially, there was some amusing confusion with the women's 10K results. When they first went up, I was 14th overall, 2nd woman (seconds behind the 40-44 AG winner), & 1st AG. Then, after about 5 minutes, a volunteer came over with updated results which showed another woman in the 40-45 category winning the entire race with a time of 31:07. According to these new results, I was 15th overall, 3rd woman (pushing the former 40-44 AG winner into 2nd), & still 1st in 30-34. That was still the state of things when I left, though my money was on the woman with the 31:07 actually having run the 5K & somehow gotten accidentally moved into the 10K results for some reason, as I was pretty sure every woman who can run an Olympic A Standard 10K is in London right now. Sure enough, as of Saturday night, any & all phantom Olympians had been removed from the results.

In terms of getting better at running a certain distance, I think people progress more or less in the following way:

I don't really know what comes after that because that's really as far as I've gotten at my best distances. (& with marathons, I've only acheived step 1!) For the most part this was just a fitness gauge for me going into Santa Rosa, but since the stakes were low I also wanted to experiment with going out a little faster than I have in the past & see what happened. I definitely wanted to run pretty hard and race but wasn't planning on going 110% all-out.

Since I have never done worse than 4th overall or 3rd in my age group in a Brazen race, I figured it was not overly presumptive of me to line up in the second row (ie, behind the front row of super-speedy looking dudes). What I find funny is that all three times I've done this on this course, about thirty women have absolutely blown by me in the first 50 yards at probably a 6:15 pace. It doesn't bother me (either I'll pass them later in the race or they're faster than me and I won't) and doesn't really interfere with my race, but part of me wonders what the point of lining up according to expected pace is if half the field is going to go out literally TWO MINUTES faster than they end up averaging. It almost makes sense for me to just start behind them.

In the past I've tried to keep my first mile in the 7:15-7:20 range, but this time I let myself go a few seconds faster. Yes, the first couple of miles of a 10K is supposed to feel pretty easy, but given how hard I had to work on Wednesday to keep my two 10K pace miles in the 7:15 range, I was pleasantly surprised that this basically felt like a warm-up. After 2 miles at 7:08 I barely felt like I was racing. I passed a couple of women in those early miles but was still surprised at how many of the women who had shot ahead of me at the start were apparently keeping up a pretty quick pace (or at the very least had done so long enough to get multiple miles ahead of me).

Mile 3 was a little slower, partly because that was when we started to get some wind, but I still felt much better than I'd expected to at that pace. At the turnaround I knew I hadn't pushed myself anywhere near hard enough to struggle in the second half, and if I ran miles 4-6 at even the same pace as 1-3 I'd PR without a problem (though there was a stiff headwind on the way back, so I knew I'd have to work a little harder for it than in the first half).

It was in mile 4 that I finally started catching up to all the women that had gone out faster than me and started passing them. I still wasn't really pushing all that hard, but every time another woman came into range I couldn't help speeding up just a little.

Still, somewhere in miles 4.5-5ish I kind of decided, "Meh; this is about as hard as I feel like working today." A significant-but-not-crazy level of effort was getting me a sub-7:10 pace, which would already be a PR, and that was kind of all I really needed to know in terms of my fitness.

The last long stretch of the course is mostly flat and straight, so I could see pretty far ahead. I could see one woman WAAAAAY out in front of me, just a turquoise speak in the distance, which was really only academically interesting since I did not believe for a second that I had any chance of catching up to her even if I'd really gunned it. But then I found myself drifting closer and closer to her, until--holy shit!--with maybe a third of a mile to go I suddenly found myself in striking range. I didn't really want to run as hard as I knew it would take to catch her, but I lost that battle to the competitive runner brain and suddenly we were in a quarter mile neck-and-neck sprint to the finish together. I passed her ever so briefly and then she floored it and crossed the mat just a second or two ahead of me as they announced us 10K females one and two. I thought for sure she must be in my age group (they pretty much always seem to be) but it turned out that she was in the 40-44 group. So gold finger medal for me it was. 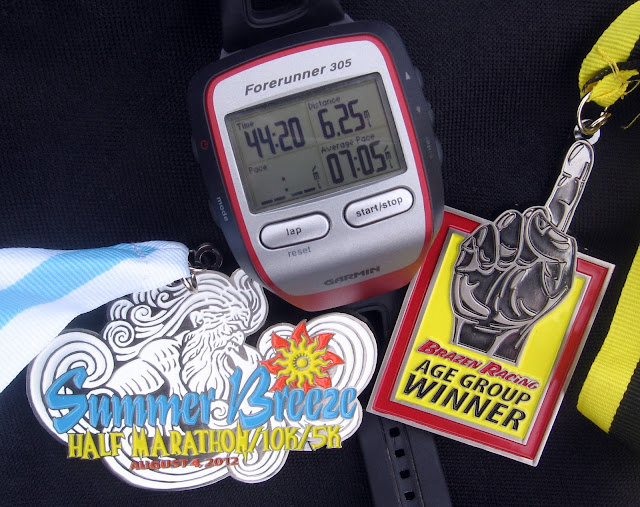 Now, in case you didn't know, these are the circumstances under which you never, EVER get to complain about race results:

But it turns out my competitive runner brain is a bit of a diva and not thirty seconds after finishing was already throwing a little hissy fit in the back of my brain. "OMG Ang, if you'd run just TWO SECONDS FASTER in those last miles we could have SPANKED that lovely woman and won the WHOLE ENCHILADA!! Why did you have to pick TODAY to run a HALF ASS FITNESS GAUGE??!?!"

To which the rational part of my brain responded, "Oh, get over yourself. For all you know she wasn't trying that hard in the last two miles either. Also, you know there's no *actual* enchilada, right?"

So yes. This race served its purpose, I did well, and though it would've been nice to have won overall (especially having come so close), I have to admit that I didn't pay for it & thus didn't deserve it. People who don't give everything they've got don't get to complain about coming in second.

In the past, Brazen participants have struck me as among the most sporting & good-spirited of runners, but WOW, were the bitches out in force post-race. And I don't mean "bitches" with affection and camaraderie (as in "mah bitches"); I mean like horrible women behaving in a rude and embarrassing manner.

I know from experience that Brazen usually posts results for the runners to look at before the volunteers giving out the age group awards get them, which usually means there's a small crowd of folks waiting (usually quite patiently) for medals at the awards table. This time there was some issue with the results (maybe the phantom Olympian above?) that caused things to take a little longer, and some people just could. Not. Deal.

One woman harangued the same volunteer for a good five minutes straight, huffing about how she had places to go and things to do and her kid could NOT wait any longer to get the medal he had RIGHTFULLY EARNED (by beating all one other runners in his age group). Another asked if she could see the medal her kid was waiting on "to see whether it's worth waiting for or not," then gave a terribly put-upon sigh and shook her head, because "Yeah...yeah, he's going to want that." A third woman straight up took the first page of results off the board where it was posted and thrust it into the volunteer's face. "Look, I've got the results right here," she said testily, shaking it at the poor woman. "How much longer do we have to wait?"

Seriously, people. Show some effing class. Just as waiting tables made me wish that doing so for a week should be a requirement for dining out, this made me feel as if volunteering at a race should be a prerequisite for running one.

Great event as always, Brazen! Love the red shirt & the crazy finger medal! I'll definitely be back next summer. :)

Posted by Angela Knotts at 6:18 PM