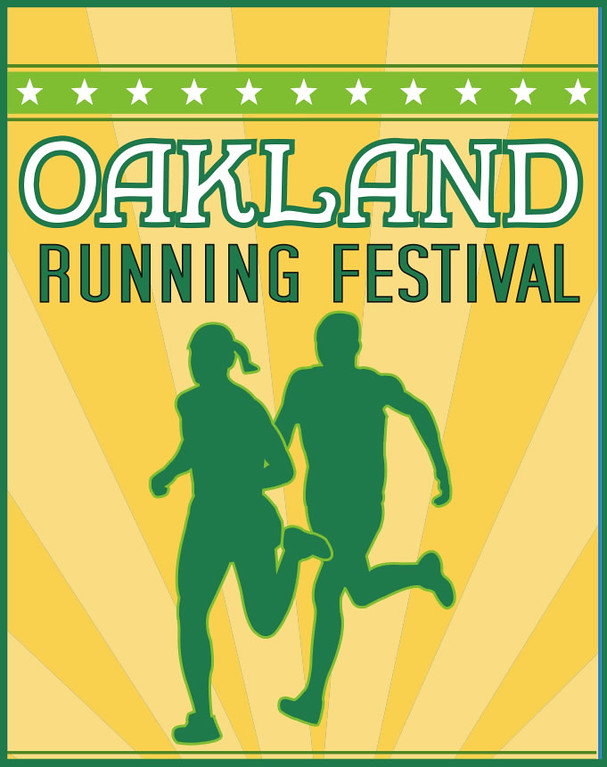 Deadlines: This year, you could sign up for all distances at the expo the day before, but not the morning of.

Sellout Factor: Given that the Oakland Running Festival is pretty new (this is only the 3rd year), there was still space in all the events on the day of the expo. I think the 5K ended up selling out there, but it didn't sound like any of the other events hit their limits.

Field Size: I don't know what the caps were, but the results page lists the following numbers of finishers:

So on the smallish size for a "big" race.

Expo: There was one. It was smallish but well-organized & easy to navigate.

I think I heard that the courses had changed a little over the three years of the festival so they may still be in the process of perfecting them. This year's marathon course had one big hill (~475 ft upwards from miles 6-9 & back down from about 11-15) & was basically flat the rest of the way. The half marathon course was reasonably flat, with just a few short rolling hills in places (and let me just warn you that one of them is the last .1 miles or so to the finish line. That kind of sucked). Both courses wind through all different parts of Oakland, and since I don't spend a lot of time there, it was neat to get to see more of it (though I have to be honest that I wasn't paying a ton of attention to the scenery). The half has kind of a lot of turns, which I was a little worried about (lots of turns = harder to run tangents unless you memorize the course), but it turned out that most of them were visible a good ways ahead, so it wasn't too hard to make sure you were heading towards the right side of the street. Also, it was awesome to see all the locals out cheering.

Weather wise, we had a 40-60% chance of rain depending on your source. It poured all Saturday evening & all night, but stopped before we left in the morning. Although it was overcast, the rain never came, and we had perfect race weather -- calm, brisk, & with a nice amount of cloud cover. The sun even came out later that afternoon for our post-race brunch! My streak of not getting rained on in a race continues unabated.

Swag: A nice long-sleeved tech shirt, hefty medal, and a neat little neon-green reusable drawstring bag. Continuing with the eco-friendly theme, instead of a giant bag full of samples & coupons you won't use and fliers for races you won't run, you can log into your "e-goody bag" online & see if there are any fliers or coupons you're interested in. I haven't done this yet, but I'm kind of curious to see what there is. 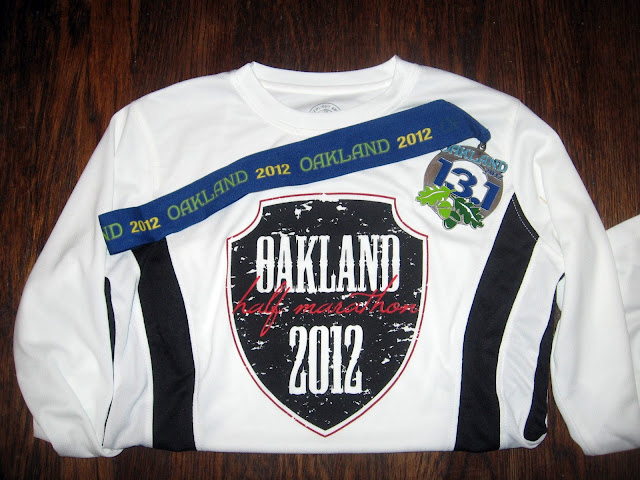 Alyssa & I carpooled from SF & hit the expo around 3:30 to pick up our stuff, then headed over to Hotel Jana, where Sesa, Karin, & we were sleeping over. (THANKS, JANA!!!) We went out for a delicious pasta dinner, watched a little "Must Love Cats," laid out all our gear, & hit the sack.

In the morning, we saw Jana & Dennis off in the full marathon, then went in search of coffee, which was only to be had from a food cart near the start. Although it wasn't raining, it was still reasonably chilly & slightly breezy if you weren't moving, so afterward we went back to sit in the cars with the heaters on, eat some breakfast, finish getting ready, etc. At this point Alyssa & I agreed that we were not feeling particularly race-y this morning, particularly since neither of us had slept well, & kind of just wanted the damn thing over with.

I posted about my goals for this race last week:

Alyssa & I figured we'd probably finish around the same time, give or take, but hadn't specifically planned on running together. At the gun, I kept telling myself 7:50-59 only--no faster. I knew I wanted to run mostly by feel, but in the first mile or two this can be tricky -- sometimes I'll think, "Oh, this feels pretty easy & about right," & look down at my watch & realize I'm running 7:20s. Sure enough, I saw my pace drop into the 7:30 range several times in those first two miles, & every time I would take a deep breath & tell myself to relax & settle. At that point 7:50 felt soooo slooooow and I had to keep reminding myself that the easier 7:50 felt now, the easier it would be to meet my goal of negative splits. Around mile 2 Alyssa popped up behind me, which was a pleasant surprise. We were both happy at our current pace, so we stuck together and ended up running together for almost the rest of the race.

From then on the name of the game was stay in the groove, be cool, & trust that I could maintain this pace for a long time. Sure enough, I was soon past the oh-but-this-feels-so-slow-&-easy phase and settling into the not-terribly-comfortable-but-manageable phase, which was where I wanted to stay. Just keep up with Alyssa, I kept telling myself. (Funnily, she was apparently telling herself, Just keep up with Angela...) Much like at CIM, I tried not to focus on how many miles were left & instead just keep up the pace.

My plan had always been to speed up just a touch after the halfway point, but once we got there I found I was just too scared to pick it up much. I was afraid that, although I was doing fine now, I might speed up by 5 seconds or so per mile and then crash at mile 12. On the other hand, I really wanted that negative split.

(I think it was somewhere in there that we saw the pirates, which you should totally check out here.)

At mile 10 we could hear the finish, though we still had to make a three-mile loop around Lake Merritt. I held on, wanting to try to speed up a little, but afraid I'd pay for it later, and I wanted that negative split so. freaking. bad.

(I'm calling this Garmin error since Alyssa & I were literally running together stride-for-stride and her mile 11 was 7:56)

At mile 12 I felt like we were close enough that I could safely hit the gas a little, but when I tried I found that, frankly, there was precious little to be had. Part-way through this mile was when Alyssa surged ahead and I just did not have it in me right then to follow. When I hit mile 13, though, I found the accelerator, and started counting down backward from 400 (which, by the way, is a really good way to get through a hard mile). I'd planned on hitting the 'lap' button at my Garmin at 13.1 just to see what that number was in case the course ended up being significantly long, but accidentally hit the 'stop' button instead. So this is what my splits were for that distance:

I didn't have total time up on my Garmin, but I knew the splits had been solid, so I wasn't surprised to see 1:43-something on the clock as I crossed the mat.

Make of that what you will. As for the goals I set...

Can we also just talk for a minute about how this is the farthest I've run so far in 2012? I've rescheduled a 14 miler like 3 times during this training cycle & never got farther than 12 for various reasons, so I am super pumped that I was able to go this far with almost no body issues to speak of. Just a little pain in the ball of my left foot during the race (annoying but completely manageable) and a sore left heel after (though that almost never goes away so I can't really blame it on the race).

This was such a good run, and it was so perfect to run with Alyssa. I totally see us busting through 1:40 sometime this year.

After, there was much cheering for friends as they finished, celebrating of PRs (many), and taking of silly sock pictures. 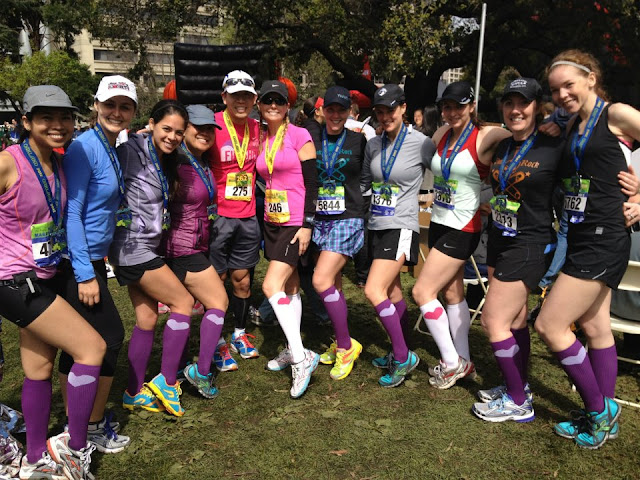 Several of us headed down the road to Lake Chalet for brunch; then it was time to come back to SF & get in some quality couch time.