Deadline: None, as far as I know; you can sign up the morning of the race.

Sellout Factor: As people were still registering last year on the morning of the race, this one probably has a ways to go before it's at risk of selling out. Last year was the first year, though, and I have no idea if the organizers have any sort of cap in mind.

Fantastic. Easy parking (it's $5 to enter the park) maybe 100 yards from the start. This, combined with the fact that both courses are loops, made a bag check unnecessary. Since it's such a small race, morning-of packet pickup was super easy. Lots of great sponsors (Sports Basement, Road Runner Sports, Bear Naked, Jamba Juice, Fluid, Clif, Larabars, & more), & tons of free snacks & drinks before & after. Also free sports psychology & chiropractor consultations afterward. I also really appreciated how they worked hard to limit event flyers, use recycled paper for the ones they did make, and didn't give out a big plastic bag full of samples you won't try, coupons you won't use, and flyers for events you won't attend. Instead, you could pickup a reusable bag if you wanted (courtesy of Bear Naked) and grab samples to throw in it as you wanted. Finally, this was the first race I've done where the results were posted at the race site within a few minutes of the event wrapping up.

Except for one reasonably sized hill (conveniently located near the end), both courses are basically flat and follow the Bay Trail south past the marina and Coyote Point Yacht Club. Running through the park along the Bay makes for a beautiful course. 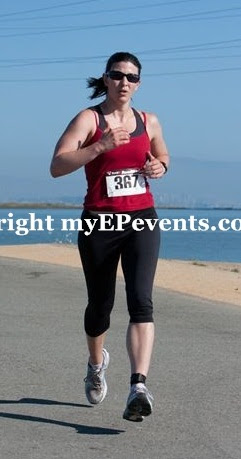 I ran the 5K as a tune-up for RNR San Jose and it was awesome. It was my first road 5K in years and I hadn't been doing much speed work at all (and certainly nothing you could call focused 5K training), so I was kind of nervous. I was planning to run somewhere in the ~7:15 range since I really didn't know what I was capable of at all at that point & figured that was probably safe. I was only wearing a regular stopwatch, though, & when we hit the first mile marker, I nearly choked when I saw that it read 6:40! "Oh, this is not good," I was immediately thinking, "NOT good AT ALL." It was possible that I was faster than I thought, but not THAT much faster.

At that point, my strategy became simply to hold on & run as hard as I could for as long as I could. I passed several struggling women in mile 2 who had clearly gone out too fast in an even more egregious manner than I had & latched on to a middle-aged dude who I thought was going a pace I could match (at least for a while). Glad I did because we were far enough out in front at that point that he was the only person I could see, & I nearly turned the wrong way until he shouted "NO, THIS WAY!" at me. "ACK!" I squealed, nearly running into him.

In mile 3, I wanted to die. I hadn't checked my watch at mile 2 so I had no idea how fast I was running, but I knew that letting up with less than a mile left would've been a shameful, shameful thing. There was a small but quite steep hill near the end of the third mile, and it was at that point that I *actually* thought I might die & the middle-aged dude pulled away from me & sprinted to the finish. With probably ~.1 mile left to go, I also sprinted to the finish, by which I mean I hurled my body desperately toward it & hoped that my feet would more or less stay underneath me.

I felt worse after that race than I think I have after any other since high school. Even a few minutes after finishing, I was not sure I would live. I was panting for breath & stumbling around like a drunk person, pouring myself cup after cup of water from the orange jug in the finisher area & attempting to get it into my mouth & mostly missing. I think the volunteers there were actually concerned for my safety.

I am pleased to say that I came in first in my age group and second overall with a time of 22:00 flat (7:05 / mile pace). I was more sore in the days that followed that race than I've been after any other I can remember, but I still had a great time & was glad I did it. 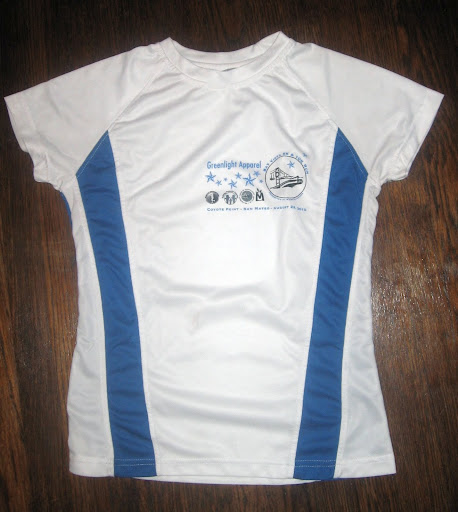 One of the draws of this race is definitely the technical shirt from Greenlight Apparel (made from 100% recycled materials!). It's a lovely shirt & I run in it all the time. Also, instead of a medal, finishers get a stainless steel water bottle (which I find infinitely more useful), & framed certificates were awarded to age group winners three deep by decade.