NVM WEEK 1: in which we join the landed gentry

Soooo last week we got enthusiastic & bought a house. 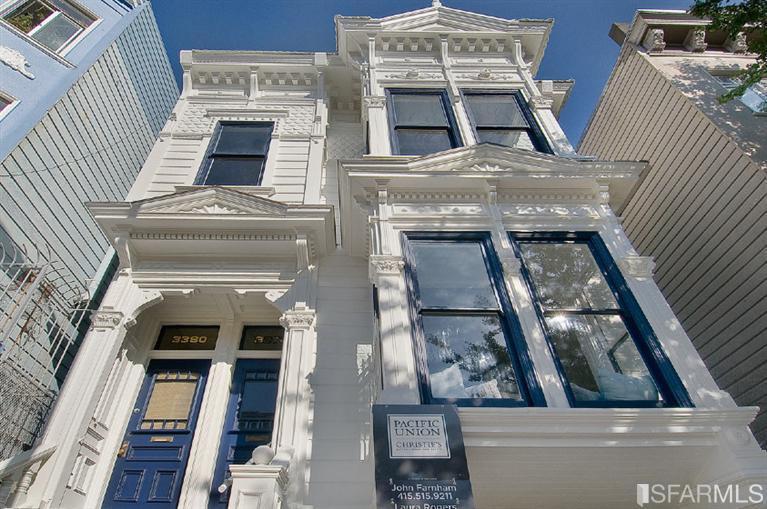 If you're thinking to yourself, "Interesting, didn't know you were thinking of buying a house," you could be forgiven, considering that we only kind of half-heartedly started looking into the process about a month ago & talked to a real estate agent for the first time on October 21. In that first conversation, they'd asked us how all-in and ready to do this we really were, because apparently when people really commit & decide to go for it, sometimes things can happen really quickly and people who are thinking they might find something in six months or so find themselves packing their bags just a few weeks later.

This is called foreshadowing.

We knew that by looking in one of San Francisco's highest-demand neighborhoods (the one we live in), being decidedly not filthy rich, and including on our "must have" list things like three bedrooms, two bathrooms, a large kitchen, an outdoor area for grilling if not an actual backyard, and at least one parking space, we could be setting ourselves up for disappointment or, at best, an extremely protracted search. For those reasons, we'd girded our loins for eight or ten months of losing offers and weekend open-house death-marches. In truth, we really wanted a historical Victorian with an old soul like the one we currently rent, but knew that if we weren't willing to compromise on the other stuff, it was very likely that we would have to find a way to be happy with new construction and probably a somewhat higher price tag than what felt super comfortable. Such is the way of real estate in San Francisco.

So imagine our shock when, just days after our initial consultation with the realtors, they sent us an email for a condo that would be going on the market soon.

With 3 bedrooms, 2 bath, a nice size kitchen, deck/patio, and a one-car garage (with space to expand to two).

With significantly more square footage than we'd been looking for.

Listed below our ideal price point.

In an old Victorian.

(Not even joking; you can see it from our current backyard.)

We saw it a few days later and I fought so hard to keep from falling in love with it, because it was almost perfect. And for all that it was listed below our price point, everything in our neighborhood goes for well above list price, and though it was possible we *might* have a shot, after seeing how great it was, we just didn't see how someone with more money wouldn't love it just as much (or more).

Emails with our agents about the place were simultaneously exhilerating and terrifying. "Based on my understanding of your goals, this place is pretty special and I know that condos like this - A+ location that will hold value and continue to appreciate over time, charm, size, parking, upside potential - are extremely rare," she wrote us at one point. "It's a double-edged sword when a great opportunity comes in the beginning of the house hunt...I don't always say that a place is one to go for but this is one."

Trying to be realistic, we kept going with the realtors to see other places, but dutifully moved forward with putting together the best (inevitably doomed, we were sure) offer we could on the first house, telling ourselves over and over again, "The worst thing that happens is they say no." We knew we had great agents, trusted their advice, and felt like they'd helped us put together the best offer we could reasonably afford. Offers went in Wednesday morning & the seller was supposed to meet with her agent that afternoon to review them, so after that there was nothing to do but wait.

Mid-afternoon, we got a text from our agent. "As for the offer, all I know right now is that we are somewhere in the running and the agent is pushing for us. More later! #GrrArgh!" For the sake of my mental health, I had to assume we weren't going to get it, so at least I wasn't a nervous wreck all day.

I got home before Don, and sometime around six thirty I heard him come in, in the middle of a serious-sounding phone conversation. Then he walked into the living room, still on the phone, smiling broadly & gesticulating wildly in the direction of the house we'd been trying so hard not to fall in love with. I think I clapped my hand over my mouth & sat there dumbfounded for a few minutes before I could do anything else.

After a bit of screaming and laughing and kind of not knowing what to do with ourselves, we made a last-minute fancy dinner reservation and, after restraining ourselves for so long, spent the evening finally letting ourselves indulge in planning and dreaming about all the things we wanted to do with a place that's actually ours.

The seller doesn't want to close until 2015 for tax reasons so we'll be in our current place for a couple more months, which will give us time to think about how & when we want to handle some of the renovations the new house is going to need.

Oh yeah, and also I did some running this week:

These were unscheduled, ugh-I-haven't-run-in-three-days-need-to-go-outside-&-move-&-get-some-fresh-air miles. For all that I've theoretically been taking Mondays & Wednesdays off from running, more often than not it seems like on one or the other of these days I get home from work just tired of being indoors & really just want to get outside & move a little bit before class. (And that's the nice thing about the low heart-rate stuff -- you can tack on a few miles just because you feel like it without risking injury or exhausting yourself too much.)

LOL. This run was hilarious & interesting & really deserves its own post, so hopefully I'll have the time to write it. The 30-second version is that I was able to run the GMP miles at right around an 8:00 average pace without my heart rate shooting through the roof; it was just hard.

No karate Wednesday night due to extremely necessary house-buying celebration.

I seriously had to restrain myself on Thursday from running more than five miles. I'm not sure why, but Thursdays are very quickly turning into one of my favorite days to run. Also, I am *really* loving the shoes I was wearing that day (and have been running in maybe once or twice a week), which just made it that much more enjoyable. (Review coming soon, promise! here!)

On Saturday morning, I had my first session with the runner/strength trainer that my massage therapist recommended, who I'll just call AT. (I probably shouldn't out her to the internet, especially after just one session.) We did about half an hour of movement, strength, & flexibility assessments and about half an hour of strength work. It was all pretty subtle stuff, so I was impressed that after less than half an hour of work, I was actually sweating quite a bit & "feeling the burn" to the point that I had to start taking rest breaks. I was SUPER sore in the butt Sunday morning, which seems promising. :)

We spent most of Saturday at a wedding in Santa Cruz, which was a TON of fun. On the other hand, it turns out that 10 hours of drinking & dancing in heels & 18 hours without a drop of water is not the greatest preparation for a 2+ hour run the next day. Sunday morning was pretty miserable but after getting some food & water in me I was able to rally & got the run done in the last glimmers of daylight. It was not the best long run I've ever had given that my glutes were trashed from Saturday morning & my feet from Saturday night, but it got better, & it was nice to finish a 13 mile run & feel about the same as I do when when I finish a 6 mile run. (That whole training thing, or whatever.) 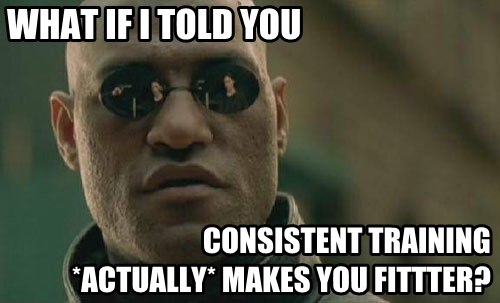 Coach Morpheus gets some pretty revolutionary ideas sometimes.
Posted by Angela Knotts at 7:00 AM

Email ThisBlogThis!Share to TwitterShare to FacebookShare to Pinterest
Labels: awesomeness, san francisco, training journal, what the what