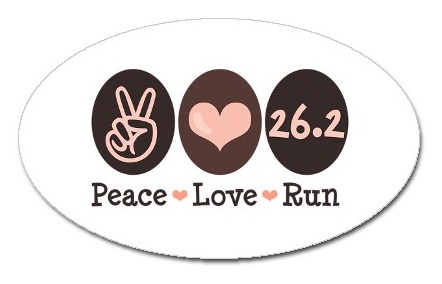 But it's true that I've never run one, and probably not for the same reasons that most people haven't. I'm not intimidated by it or afraid of the distance. I don't have any doubts about my ability to finish. Hell, based on my times at other distances, I'm even pretty confident I could qualify for Boston without too much trouble. There are a number of things that hold me back, though:

1) I have a short attention span. A friend of mine hypothesized that this is the reason why I'm strong in the half marathon. As she put it, "I think you get so bored after running for an hour and a half that you just sprint to the finish." There's a little truth to that. I have these moments during half marathons (and long runs in general, in fact) of utter incredulity at how long I've been running and how many more interminable minutes there will be until I can do something--anything--else. These moments aren't about pain or discomfort; just boredom. I can sustain the adrenaline rush of race day easily through a 5 or 10K, and even most of the way through a half marathon (plus you always get the little rush as you close in on the finish), but eight miles of starting line adrenaline plus two miles of finish line adrenaline subtracted from 26.2 miles leaves a LOT of blah time to pull a Forrest Gump:

2) I know I'd insist on my best effort. I'm not the kind of runner who participates in a road race just for the fun of it. The idea of jogging leisurely along for 26.2 miles "for the experience" is utterly foreign to me. Now, I certainly don't believe that this in any way makes me better / more serious / more awesome / more of a "real" runner than people who approach running & racing this way; it just makes me another type of beast who happens looks at racing through a different lens. If I'm coughing up the registration fee (and potentially travel costs as well), then I am damn well going out there prepared to run nothing less than the absolute fastest race I'm capable of, and I'm acutely aware of how much time I'd have to devote to training for that to happen. I think it would have to become almost a full-time job for a few months, and there's never been a point in my life where that was really feasible. For me, the marathon is significant enough an endeavor requiring enough investment & sacrifice on all fronts (time, energy, emotion, money, risk of injury, etc.) that there's just no point in doing it unless I can really do it right. 3) Anyone can do it. Don't take this the wrong way -- running a marathon is an amazing accomplishment, an epic struggle, and anyone who does so has every right to feel proud and brag a little. But, to quote Bob Glover, "anyone can be [a marathoner] no matter who you are, how much you've run, or how slow afoot you are." All it takes is time, patience, and discipline. At this point, sometimes it seems as if everyone and their mother (not to mention their 92-year-old grandmother -- Gladys Burrill, left, holds the record for oldest female finisher) has run a marathon. And good for them!

But let's be clear that what used to be the Mount Kilimanjaro of running has of late become the pursuit of couch potatoes who want to get in shape, middle-aged non-athletes who want to reclaim their youth, and ambitious grannies who want to feel young and svelte. And, again I say, good for all of them! This is all wonderful news. The marathon IS in reach of everyone. It is NOT solely the domain of genetically blessed elites and the idle massochistic. Anyone can do it. As a running goal, though, that makes it a little less appealing to me than either winning & placing at shorter distance or shooting for something that is a little less common, like a 50 or 100 miler. (In fact, I think that's maybe the one situation where I can currently see myself taking on the marathon, as a stepping stone to an ultra, which I'm actually not all that confident I could finish. Which is exactly why it's interesting.)

4) I have a healthy respect for the distance. This is where Emil Zapotek's quote comes in. How many times have I heard non-runners muse thoughtfully, "You know, I think I'd like to run a marathon. That'd be cool." Sometimes they even shout it from the mountain top: "Look out, world! I am going to run a MARATHON!!"

I'd be the last person to discourage these folks; there's a lot to be said for setting really big goals and exploring your limits. But a non-runner's understanding of what it's like to run a marathon is about as sophisticated as a ten-year-old's understanding of what it's like to be a doctor. That doesn't mean we tell the ten year old he shouldn't try to become a doctor, but we do approach the idea with the understanding that he's going to need a few years of science classes before he understands enough to really know whether he wants to be a doctor. 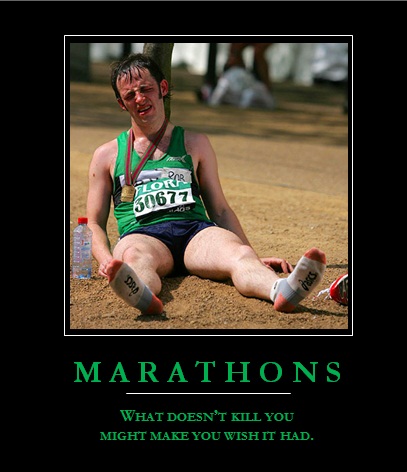 My understanding, on the other hand, is reasonably sophisticated at this point. I've put in my share of 15-20 mile training runs and raced a number of half-marathons. I understand that "other life" Zapotek is talking about. To quote Bob Glover again, "The race itself is grueling and unpredictable. It's long enough to fully tax your body, mind, and soul. Your energy supplies, muscular endurance, emotions, and psychological strengths are fully tested...The marathon is an epic struggle." I'm cautious about it because I know what I'm getting into, and mentally I treat it with a special reverence, never lightly or flippantly; at least until their first long run, the uninitiated have the advantage of blessed ignorance.

5) I just don't want it bad enough. And really, when I look back at the other four reasons, don't they all come back to this one in one way or another?

I studied a lot of psychology in college. Psychologists like to make tidy little two-by-two boxes to sort people, behaviors, etc. Here is a two-by-two box I made to sort how people feel about running marathons: 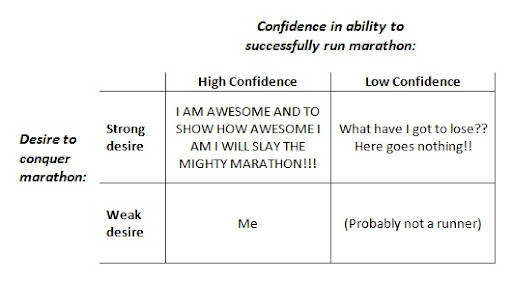 It isn't that I'm not vaguely curious about the experience. If I could come up with a really compelling reason to do it, I probably would. But to be honest, I feel like running a marathon (at least for me) is a little like getting married or having kids: no one should ever, ever, ever do either with anything short of 110% enthusiasm. These are all questions where the answer should be unequivocal: 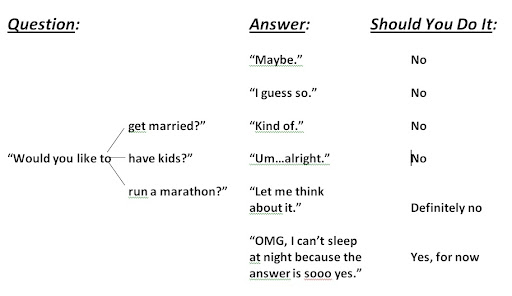 Of course, none of this means a marathon is out of the picture for me. I used to swear it was, that I would never toe that particular starting line no matter how I was bribed, threatened, or beaten for as long as I lived. While I still don't have any concrete (or even tentative) plans to do it, I can at least imagine it happening now, maybe sometime when I've been injury-free for a good while and find myself with more available time for consistent training. I've even got a few of these hypothetical marathons picked out, should I ever really get the itch. And I can't deny that I've imagined what it would be like to run Boston, just once, twelve-ring-circus that it is.

For now, though, I'm perfectly content to hit up the local 5 and 10Ks, plus the occasional half marathon. If nothing else, they require a lot less commitment & recovery time, and I can definitely race them a lot more often. The marathon, on the other hand, I think is worth waiting for until you're really sure you want it. And for now, I'm content to wait. :)
Posted by Angela Knotts at 5:48 PM No comments: 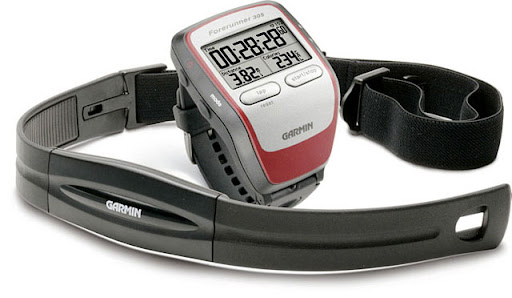 Back in the day, I used to run with both a stopwatch and a heart rate monitor on my arm. Then when I got back from my run (assuming I'd been running on the roads and not a track or a trail with mile markers), I'd plug my route into Google Maps and input that distance and the time from my watch into an Excel spreadsheet to determine my average pace.

GOD, can I tell you how beyond elated I was to finally consolidate all of these myriad functions into one gadget?

I was a bit skeptical about the prices of Garmins & similar devices at first and definitely spent multiple weeks researching all the available models to determine which made the most sense for me for the price. Ultimately I ended up spending Christmas money on the 305, which I've been exceptionally pleased with ever since.

I'll be the first to admit that I probably haven't tapped even half of the crazy power of this thing, but I'll happily tell you everything I love about it that I have used: 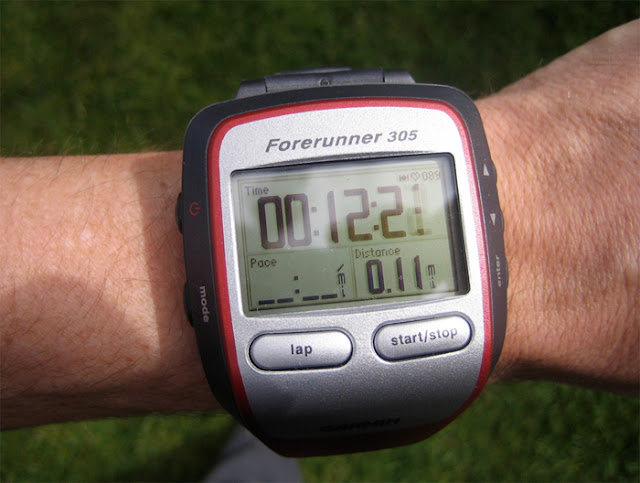 Getting this device changed everything for me. No more peering at tiny numbers in dim light or bad weather. No more wondering how accurate online map applications are. No more guessing what my pace is when I'm running on unmarked roads or having to wait until mile marker 1 during road races to determine whether or not I'm not pace. I love it and believe it was worth every penny.

Which is not to say it's absolutely perfect. For one, it's big. Not as big as previous Garmins, I've heard, but still 2-3 times the size of your more traditional stopwatch. This hasn't bothered me at all (it actually contours pretty nicely to the wrist), but for some people it might be an issue.

Second, the GPS / pace function isn't absolutely flawless; there is definitely a little time lag in terms of what pace it displays, and though it normally picks up the satellites within a few seconds, there have been a couple of days where I've had to wait 5-10 minutes for it to lock on. Many reviewers seem to feel that buildings, trees, and weather don't interfere with the GPS, but sometimes I wonder; there are specific spots that I run past (a couple on track, which is annoying) where the instantaneous pace seems to reliably register faster or slower by enough that I know the numbers it's showing me can't possibly be accurate.

Finally, the 305s do seem to have a tendency to occasionally refuse to turn on and require a soft or potentially a hard reset to revive them. This has happened to me only once and I was able to turn it back on with all the data intact after just a little Googling and a soft reset. From what I've read on the Garmin user forums, the consensus seems to be that the unit is actually not quite perfectly waterproof, and if sweat or water does manage to leak inside, it can cause that to happen. Some users recommended sealing the case with silicone; I just do my best to keep it reasonably dry. (BTW, I’ve found that holding down ‘lap’ and ‘mode’ together for a few seconds solves the problem.)

But, overall, I highly recommend the 305. It's a solid piece of equipment that does a TON of amazing and useful stuff for the price, and if you've never trained with a Garmin or Garmin-like device, I guarantee it will change your running life.
Posted by Angela Knotts at 5:51 PM No comments: