I'm not really all that focused on the 5K right now; in fact the only reason I signed up for it was because my half marathon program called for a 5K time trial two weeks before the race, and this one was on the right date & relatively close & cheap. (By & large it was well-organized and well-done, so I can highly recommend it!) Still, I did set some 5K goals at the beginning of this year.

My immediate goal was just to beat my rather outdated 5K PR of 22:00, which I felt 99.99% certain I could do this year just because it's such an old time at this point and I'm in considerably better shape now. My intermediate goal (as in doing it this year was possible but far from certain) was 21:30, just because that would mean a solidly sub-7:00 pace. My long-term goal (as in I'd really like to do this before I die) was 20:30.

I was pretty sure I'd break 22:00 in Atherton, but I didn't go into it expecting much more than that. My plan was to run it pretty hard and really race it, but not 110% balls-to-the-wall as hard as I possibly could. Between that & the fact that my training for the last few months has been very half marathon-centric and not at all 5K-centric, I figured I might go 21:45ish, or if the stars aligned and I had a great race, reach my 21:30 goal.

Deadlines: None; race day registration (though I think online reg closed a week before the race)

Sellout Factor: Unlikely. I don't know if they have a cap but it seems like race day registration is a regular thing.

The Course: There was no published course map, but the web site described it as a "professionally timed, marked course begining at the Menlo-Atherton High School Gym Lot on Ringwood [that] weaves through beautiful, flat Lindenwood, and ends on Coach Parks Field with a track finish," which I would say is pretty accurate. They did have course maps at the bib tables & big posters of it up on the gym walls, which I appreciated. The course was flat, plenty wide, easily navigable with lots of volunteers to point you in the right direction, and SHADED, which I appreciated given that it was probably at least 70 by the time the race started at 9. Plus I love me a track finish. :) 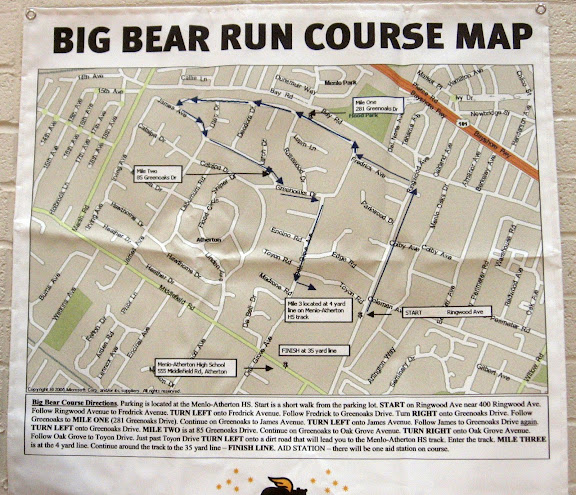 Logistics: Very easy. Parking is in the school lot which is sizable; I got there a little after 8 and there were TONS of spots. I didn't know exactly where to go so just followed people who seemed to know where they were going; bib & shirt pickup were in the gym, about a 3 minute walk from the parking lot. They had the the real bathrooms in their gym available, and I was kind of surprised how short the lines were. There was no sweat check, but the parking lot is so close to the start/finish that there's not really a need for one. (I just stashed my bag behind a volunteer table where I was pretty sure no one would bother it, which is my usual tactic at small races.)

Swag: A cotton T-shirt (at pricey for-profit races I bitch about cotton shirts, but I think it's totally fine & par for the course at fundraisers) and nice medals awarded three deep in each age/gender group (under 12, 13-18, 19-29, 30-39, etc.), with the group info engraved on the back (a nice touch)

My loose plan was to try to run the first two miles in the 6:50s and then give it whatever I had left for the last mile. Once I had my bib & shirt & had scoped out the course map & start, I jogged an easy mile to warm up, did a little dynamic stretching, & headed to the start.

Honestly, I have very, very few complaints about this race and I certainly don't hold tiny local fundraisers to the same standard as I do large, professionally-run, for-profit affairs. Still, I would offer the organizers just a little advice about the start. First, I think it would have been good if the guy with the bullhorn giving instructions would have added something about lining up according to expected pace, because I think a lot of people who were just participating for fun and not really racing just legitimately didn't know that that's how it's typically done. Most people just pressed toward the front willy-nilly, and I knew the start had the potential to be shall we say interesting when I overheard a group of teenage girls in front of me discussing which of them were thinking about attempting to do the whole thing without walking.

Second, getting runners' attention for some sort of countdown or "Ready...Set..." action prior to the bull horn tone that served as the gun would've been nice. One second, he was giving instructions and people were hanging out chatting and then out of nowhere came the tone and I'm surprised people weren't full-on trampled in the ensuing freak out. I was pretty near the front and managed to weave my way around the run-walkers fairly quickly without tripping over anyone, so I'm certainly not suggesting that the start line antics had any effect on my race or finish time. It just could've been slightly better organized.

Inevitably it takes me the first quarter mile of a short race to settle into the right pace, but it can be worse at fun run-type events just because so many people tend to take off at a mad sprint and it's hard not to get caught up in that. I had my watch set to show me average pace for each half mile, so I just tried to keep it right around 6:50. The first half mile was definitely faster than I intended, but after that I settled in fairly quickly. As the first mile clicked off (6:47) I still felt pretty good and was thinking, "Wow, this isn't bad at all! Maybe this will be easier than I remember."

But that's the thing about having not run a 5K in so long; I'd forgotten how quickly that kind of pace starts to catch up with you. Halfway through mile 2 I started to feel how hard I was working, but was able to keep the pace and even speed up a little. By the time I hit the 2nd mile marker (6:40, though I didn't look at the time), I was starting to reach that OMG-so-ready-to-be-done place. (Guy next to me, panting: "Come on, show me a mile marker...." Me, in my head: "Right there with you, buddy.") At that point I knew I would PR, but I wanted to run an honest race all the way to end.

I didn't look at my watch in the last mile & just tried to gradually speed up when I could. As in Oakland, I kept wondering if it was too early to start pushing hard and kept concluding that no, I should play it safe & wait until I could see the finish. As soon as I spotted the track I started to push, then really gunned it for those last 300 meters on the track. I don't usually keep total time up on my Garmin, so when I hit the homestretch and saw 20:50 on the clock, I was completely shocked & sprinted as hard as I could in an effort to get in under 21:00. I think I crossed the mat somewhere around 20:56.

Cheerleaders cheering on runners as they approach the track 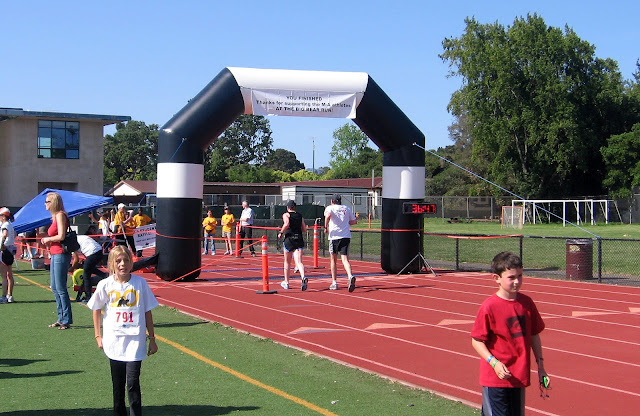 When they posted the results, my official time was 20:44 (5th female overall, 2nd in my age group). I don't know for sure but I have a sneaking suspicion that the marked start line was not the actual start line. There were several different cords on the ground and it would not surprise me if one that picked up the chips was actually some number of yards ahead of the one they had us line up behind (which would also explain why my watch clocked more like 3.25ish). If they started the race clock with the gun and it took me 12 seconds to get from the starting line to the sensor, that would explain the difference.

The one other suggestion I have for the organizers is to do a little more planning around the presenting of medals. Most small races I've done don't even bother & just have a table where AG winners can pick up medals, but if you're going to do it, you should work out in advance when, where, who will hold the list, what order people will go in, whether or not there are supposed to be pictures of each group, etc. It was a bit disorderly and I'm not really sure the crowd knew what was going on (though this was in part due to the volume of the loud speaker, which to be honest was more of a quiet speaker). 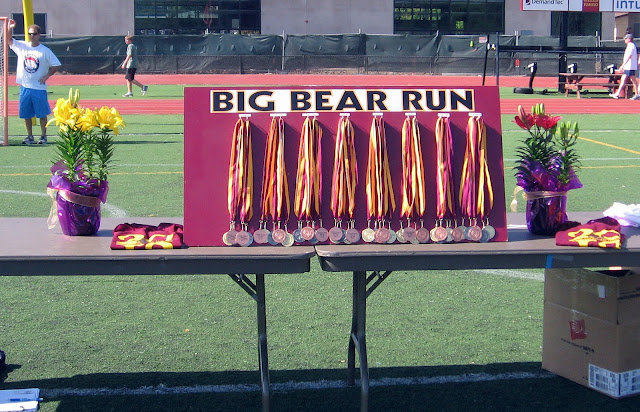 I'm still reeling from this a bit. My big, hairy long-term goal has been to break 20:30 and get sub-seeded at Bay to Breakers, with an intermediate goal of 21:30. I thought if I had an AMAZING race today, I might be able to break 21:30. To have blown it so completely out of the water without even going 110% all-out has sort of boggled my mind. Don't get me wrong -- I am not saying it was easy or that I didn't have the death feeling a little towards the end, but in mile 3 I definitely went the slightly more conservative route rather than taking a risk and pushing hard all the way to the finish. Afterward I was certainly breathing hard and stumbling around a little, but it wasn't like when I ran the 22:00 in August '10 and finished light-headed and seeing spots and unable to stay upright -- now that was 110% effort.

So I'm having a little of that same whose-body-is-this-and-how-did-I-get-into-it feeling I had a couple of Fridays ago. Suddenly my long-term goal of 20:30 is squarely in the cross-hairs, something I was completely and totally unprepared for this soon. I'm not quite sure how it happened, but I will certainly take it. 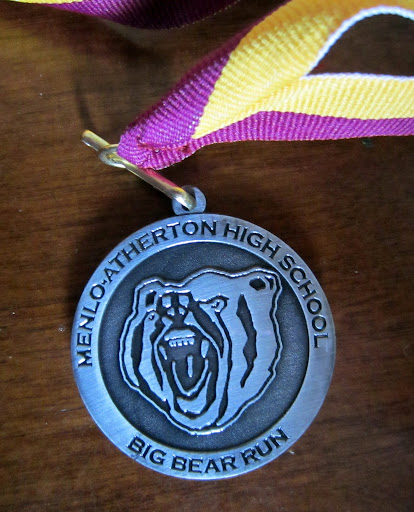 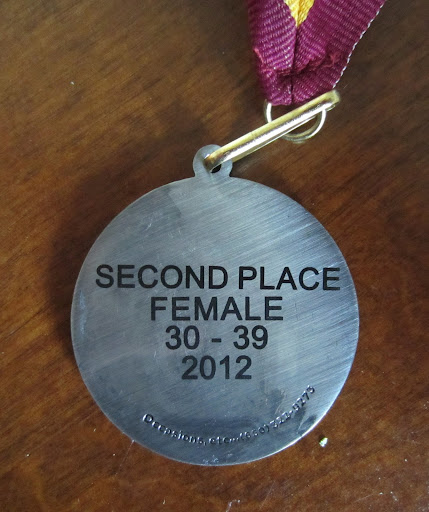 Posted by Angela Knotts at 4:39 PM